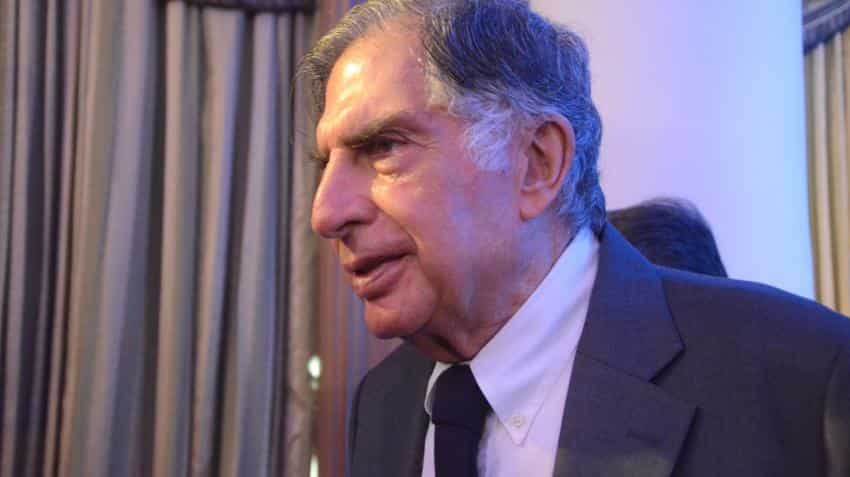 Seven out of the nine directors of Tata Sons voted for his replacement after Farida Khambata abstained and Mistry was declared ineligible to vote as he was an interest director. Image Source: IANS
Written By: PTI
RELATED NEWS

Tata Group patriarch Ratan Tata had personally asked Cyrus P Mistry to resign as chairman of Tata Sons as the board had lost faith in him, but his refusal led to the removal via majority vote.

In a para-by-para response to the petition filed by investment firms associated with Mistry's family against his removal, Tata Sons - the holding company of the $103 billion salt-to-software conglomerate - told the National Company Law Tribunal (NCLT) that Mistry was removed as Chairman on October 24 last year after "little or no signs of improvement" in his leadership.

Seven out of the nine directors of Tata Sons voted for his replacement after Farida Khambata abstained and Mistry was declared ineligible to vote as he was an interest director.

"Before the commencement of the board meeting of Tata Sons on October 24, 2016, Ratan N Tata and (director) Nitin Nohria personally spoke to Cyrus Mistry and offered Cyrus Mistry an opportunity to resign voluntarily as Executive Chairman. However, Cyrus Mistry refused to do so," Tata Sons said in 204-page affidavit.

Stating that the decision was not taken suddenly or in haste, it said the removal "was the result of a chain of events that led to a growing trust and confidence deficit that had to be addressed without delay".

During his four years at the helm, "several disturbing facts" emerged about his leadership including insufficient details and discipline on capital allocation decisions, slow execution on problems, strategic Plan and Business Plan lacking specificity and follow-through, no meaningful steps to enter new growth businesses and weak top management team.

Trust Nominee Directors -- terms which he himself had participated in finalising through extensive meetings and discussions with representatives of the Tata Trusts and external advisers.

Mistry in a "systemic and planned manner" reduced the representation of Tata Sons' directors on the boards of other major Tata Companies.

The affidavit said: "This systematic dilution weakened the bind through which Tata values, ethos, governance principles, group strategies were to be implemented across the Tata Group companies.

"During Mistry's tenure as Executive Chairman, several board members, including Nohria, repeatedly expressed their concerns to (him) about the criteria and discipline employed to make capital allocation decisions," said the affidavit.

While there was little discipline on expected returns on capital commitments, there was limited detail on the financial or strategic milestones that companies were expected to achieve to justify these capital requests, it said.

The affidavit said Mistry focused only on the problems from the past and blamed them on "legacy issues" but identifying these hot-spots, the execution and follow-through was slow and lacked a sense of urgency.

Although a strategic plan was presented in June 2014, it lacked the specificity. Also, no new business initiative was launched that gained meaningful traction.

"Ensuring a positive relationship with investors and shareholders specially the principal shareholders is one of the primary duties of any leader, which Mistry was unable to fulfil. This led to a growing and untenable trust deficit between Tata Sons and the Tata Trusts," it said.

For 4 years, the directors of Tata Sons supported Mistry and exercised caution, restraint and patience, according to the affidavit.

"It was Mistry himself who invited Ratan Tata to be the Chairman Emeritus of Tata Sons and in that capacity, Ratan Tata had the right to participate in the meetings of the Board of Directors of Tata Sons," it said.

Prior to October 24, 2016, in his capacity as Chairman Emeritus, Tata never attended any board meeting of Tata Sons and used to render advice only if warranted, as a person interested in the welfare of the

Tata Group and in most cases, if not all, only when Mistry reached out to him.

"Ratan Tata personally advised and counselled Mistry on several matters, when time and again Mistry reached out to Ratan Tata for guidance on business related matters," it said.

It said although the Nominations and Remunerations Committee of Tata Sons, in its meeting held on June 28, 2016, made positive comments on Mistry's performance, it also stressed upon "the need for greater clarity on the functioning of the Board of Tata Sons Ltd in relation to the Tata Trusts, as well as its role vis-?-vis Group Companies".

Further, the Committee "did not sufficiently factor his ability to lead the Tata Group in the future".