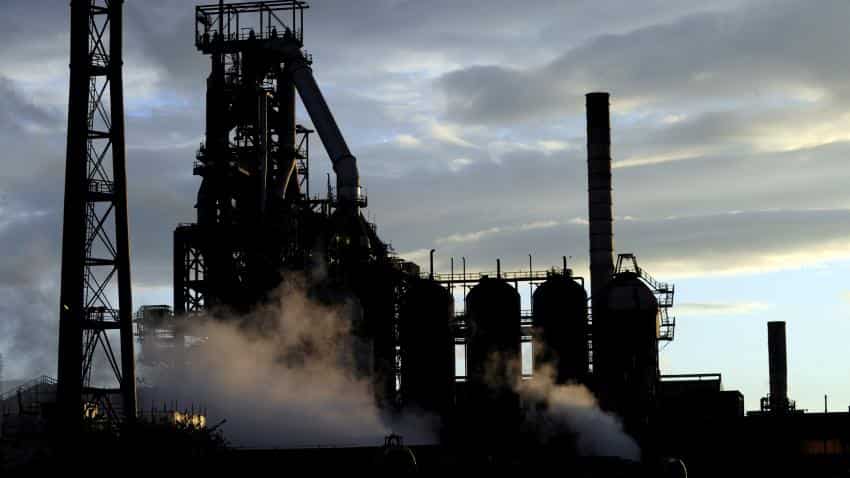 One of the blast furnaces of the Tata Steel plant is seen at sunset in Port Talbot, South Wales. Image Source: Reuters
Written By: PTI
RELATED NEWS

Citing "heightened management risk" following the ouster of Cyrus Mistry as Chairman of Tata Sons, Brickwork Ratings has revised outlook of Tata Steel to negative while as revised the ratings of its NCDs worth Rs 6,500 crore.

The revised rating however continues to place the company in the 'high degree of safety' category with regard to the services to debt.

Tata Steel's gross debt rose to Rs 85,475 crore at the end of the June quarter of the fiscal, from Rs 81,975 crore in the year-ago period, mainly due to increase in India and Tata Steel Global procurement. Its net debt also rose by Rs 4,171 crore to Rs 75,259 crore during the same period.

In a same regulatory filing, Tata Steel said as part of review by Brickwork Ratings, the agency on October 27, 2016 revised Tata Steel Ltd's credit rating to BWR AA from BWR AA+ for NCD and BWR AA- from BWR AA for the perpetual debt, with a negative outlook.

"While the company clarified its position vide its press release dated October 27, 2016, according to Brickwork, the ratings change has resulted due to the uncertainty consequent to the recent change in top management at Holding Company/ Group Level which could slow down vital decisions such as cost cutting and deleveraging the Balance sheet concerning the unprofitable UK operations and restructuring of the European business," it added.

Last week, in a dramatic development which took corporate world by surprise, Cyrus Mistry was sacked as Chairman of Tata Sons and was replaced by Ratan Tata, from whom he had taken over the reins of the over USD 100 billion salt-to-software conglomerate four years ago.

Brickwork on October 28 had placed the ratings of Tata Chemical's unsecured NCDs worth Rs 250 crore "under watch" citing "heightened management risk" in the wake of Mistry's removal.

Counted among the top steel producers globally, Tata Steel has a production capacity of around 27.8 million tonne per annum (MTPA) with operations spread over 26 countries and commercial presence in more than 50 countries.

In the April-June quarter of this fiscal, Tata Steel's net loss rose manifold to Rs 3,183 crore on consolidated basis against a net loss of Rs 316.91 crore for the same quarter in 2015-16.