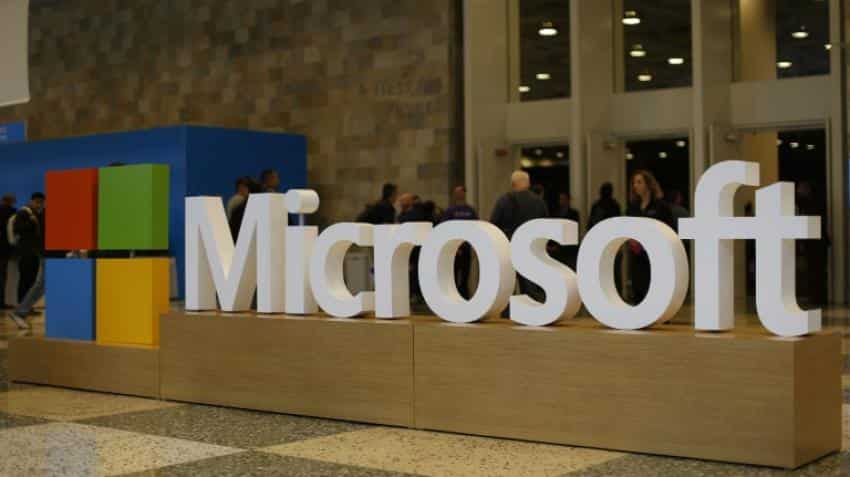 Microsoft posted a net profit of $4.7 billion for the fiscal first quarter, down 4 % from a year earlier. Image Source: AFP
Written By: AFP
RELATED NEWS

US software colossus Microsoft Thursday reported a slip in quarterly profit but still topped expectations due to rising demand for offerings in the internet cloud.

Microsoft posted a net profit of $4.7 billion for the fiscal first quarter, down 4 % from a year earlier, on revenue that remained essentially flat at $20.5 billion.

Microsoft shares jumped more than five % to $60.46 in after-market trade that followed release of the earnings figures.

Microsoft built its fortune on packaged software but has made a priority of offering applications as services hosted online and accessible from a broad array of internet-linked devices.

The shift in strategy has been deemed vital for the company, as lifestyles have shifted to mobile devices and accessing cloud services whenever desired.

Microsoft also is among the US technology titans making a priority of artificial intelligence that lets machines think the way people do, with the potential to make online services smarter and easier to engage.

The tech giant last month announced it was putting its machine brains into a Liebherr refrigerator, which can remind people what they need at the market as well as keeping their groceries fresh.

The move came on the heels of Microsoft saying it is working with Lenovo to allow apps such as Office and Skype to be installed on the Chinese computer titan`s mobile devices powered by Android software.

The firms said they were "deepening their strategic relationship" with a move that could add to the ranks of people using Microsoft programs as services hosted in the internet cloud.

Microsoft and leading Android smartphone maker Samsung announced a deal last year to bring the US company`s software to smartphone and tablets made by the South Korean firm.

The company`s shift in strategy allows it to make money from people using its popular applications as cloud services accessed from Apple or Android devices, since the firm has failed to gain traction with its Windows mobile in the fiercely competitive smartphone market.

Microsoft`s phone unit revenue was down 72 % in the first quarter, while revenue at its Windows computer operating system arm was flat, according to the earnings report.

Meanwhile, Microsoft reported increased revenue from Office and other cloud-based services, and said money taken in by its Azure cloud computing platform more than doubled from the same quarter a year earlier.