Housing Development Infrastructure Ltd (HDIL), the Mumbai-based real estate developer, which played a risky game of slum development projects and transferable development rights, is now looking at various strategies to pull itself out of the abyss 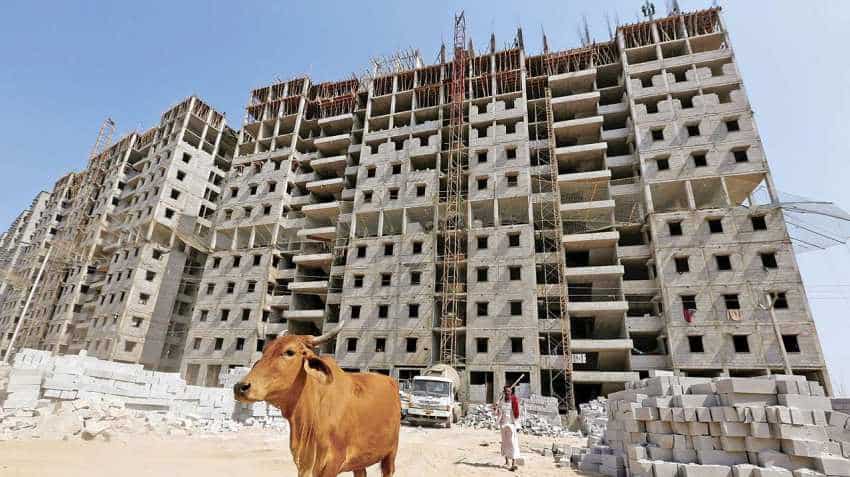 HDIL has nine residential projects within Mumbai. A couple of quarters ago, that number stood at 11. Image source: Reuters
Written By: Ateeq Shaikh
RELATED NEWS

When Srinath Kapoor booked an apartment in Housing Development Infrastructure Ltd’s (HDIL) Whispering Towers in Mumbai’s eastern suburbs in 2011 and invested over Rs 70 lakh for a 3BHK, his family was planning to settle in Mulund’s serene locality. Nearly a decade later, he is running from pillar to post as the project is stuck half-way. Kapoor has now joined hands with 400-odd fellow home buyers to fight for their long due ‘dream house’.

As the project development dragged, he discovered to his dismay that it was a Slum Rehabilitation Scheme Project, details of which were not revealed to the buyers. There were other discrepancies too in the sale documents inked between the buyers and the developer. “The agreements of various home buyers mentioned different dates of possession for the same building and the same wing. Some had it May 2015, while some others, October 2016, and even, December 2018,” he says.

The project is stalled with no valid explanations given to the irate buyers. As on September 30, the saleable building is only 18% ready and the rehabilitation building, 52% ready.

In the last couple of years, recovery notices were issued twice against the project; the first one by the municipal body for non-payment of taxes and the other by Allahabad Bank as the developer defaulted on the debt servicing. Both the notices were withdrawn later. Though HDIL arrived at a settlement with the bank, dues for Whispering Towers are yet to be paid to the lender. It paid an amount of Rs 34.71 crore to Allahabad Bank for its other project in Palghar, which is facing similar fate.

Only a handful of HDIL’s projects like Meadows at Ekta Nagar in Goregaon and one in Kurla West are actually progressing. All others are either completely at a standstill or going at a snail’s pace.

HDIL has nine residential projects within Mumbai. A couple of quarters ago, that number stood at 11.

Some home buyers have moved Maharashtra Real Estate Regulatory Authority (MahaRERA) against the developer to seek justice. “So many buyers are lining up their petitions with MahaRera. There is unrest among HDIL home buyers,” said an advocate handling real estate-related litigations.

Some others have moved the consumer court while a few others, the Economic Offences Wing (EOW), are seeking to book the realtor for misleading them.

During an analyst call post the financial results, HDIL’s vice chairman and managing director Sarang Wadhawan was reminded of his promise a quarter ago that the construction of Whispering Towers would resume in August. Wadhawan was quick to come up with another deadline of November-end.

“When Lehman Brothers crisis hit, there were private equity players who had invested in the industry. They needed an exit, so the public sector banks were asked to pitch in. This led to a surge in property prices because the value of the property had to increase in order to give returns,” says a real estate consultant.

Real estate prices in Mumbai went north once again until 2013 only to hit a patch of long stagnancy.

However, during these years, the developers were focusing on either mid-segment or luxury housing projects while HDIL continued its focus on Slum Rehabilitation Authority/Scheme projects. In October 2007, it bagged Mumbai airport slum rehabilitation project.

It had a massive job at hand to clear 276 acre of airport land before October 2010, but went behind the schedule. This, many industry observers say, turned out to be HDIL’s quagmire.

The airport slum rehabilitation project never recovered, and ended with a termination notice in 2014.

“Since the IPO, the cost of funding, too, went up and the cash flows by way of sales weren’t supporting. It soon became very difficult to run the business,” adds a consultant.

An industry insider said HDIL’s land bank was overvalued during the IPO year. “The company spent heavily on land acquisitions after the IPO.”

Wadhawan told DNA Money that the airport slum rehabilitation project virtually punctured his business empire. “It’s still trying to recover from the mess it had got into,” he said.

An industry insider said the airport project not only faced clearance-related challenges but slumlords too, who didn’t budge. “HDIL’s slum rehabilitation projects faced approval-related issues, leading to a downfall.” During the IPO launch, HDIL’s price band offer was between Rs 430-500 and issued at Rs 490 per unit.

“HDIL had a lot of TDR from their slum rehabilitation projects. Later, when the airport slum rehabilitation project got into a limbo. Slum projects undertaken by them, too, got stuck. I haven’t seen them actively coming in the market for the last three-four years. HDIL and a couple of other real estate players in Mumbai sit on most of the TDRs issued in the city,” said the real estate consultant.

According to HDIL’s books, it has TDRs of around a million square feet as of the first quarter of 2018-19, down from the earlier 1.5 million square feet. A big chunk of the TDR got generated from the airport slum rehabilitation project, and a substantial number of units built has been lying vacant.

The company wants to monetise this over the next couple of quarters.

“We are seeing a lot of interest with respect to B2B (business-to-business) transactions, with respect to FSI and TDR sales. TDR is selling in different locations at different prices. It ranges anywhere from Rs 4,000 to Rs 4,500 per square feet going to about Rs 5,000 this quarter (Q2),” Wadhawan said early this week in an earnings call.

Now, HDIL is looking forward to another 2 to 2.5 million square feet of TDRs that it has the potential to generate in the coming years. The lack of clarity in the new development plan (DP) has resulted in the status quo on TDR generation for almost a year. As Mumbai’s development plan has been sanctioned, HDIL has now started moving its TDR files.

A few years ago, when Mumbai Metropolitan Region Development Authority had come out with the sale of their own TDRs, they faced challenges in offloading the same in the open market. Why? “Certain players wanted the market to buy TDR from them instead of MMRDA. There was a price competition,” says an MMRDA official.

This story first appeared in DNA Money: How they lost the plot