Houses can be sold at places where people with wherewithal and resources are residing and it can happen if job opportunities are created, says Sangeeta Prasad, MD & CEO, Mahindra Lifespace Developers Ltd, in a candid chat with Zee Business. 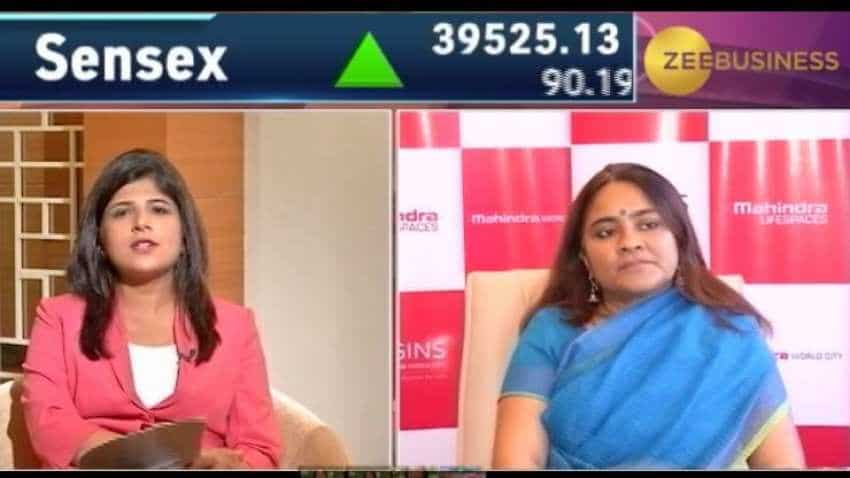 Sangeeta Prasad said the government should give opportunities to invest in stressed assets and deliver the units to customers. Image source: Zee Business

Houses can be sold at places where people with wherewithal and resources are residing and it can happen if job opportunities are created, says Sangeeta Prasad, MD & CEO, Mahindra Lifespace Developers Ltd. In a candid chat with Swati Khandelwal, Zee Business, Sangeeta Prasad, said the government should give opportunities to invest in stressed assets and deliver the units to customers. Edited Excerpts:

Q: What are your expectations from the Union Budget 2019-20?
A: I think, the government is aware of it and that’s why it introduced certain changes – at short intervals – in the tax regime. The changes had an impact on customer sentiments and developers faced problems in preparing for it. I expect that the government will have a close look in this direction.

Apart from this, a lot of stressed assets has entered the real estate market. Incidentally, banks and NBFCs have invested in those projects. So, the government should give an opportunity to branded developers like us to invest in those assets and deliver the units to the customers that too at the right price.

Q: If we compare India and China with respect to the Special Economic Zone (SEZ) than it hasn’t performed well in India. What is your opinion on it and why it didn’t succeed in India? Do you think that the Union Government should focus on it?
A: I will not make a blanket statement that it has failed completely because we, as Mahindra’s, had an opportunity in SEZs and have good experience in the segment. Mahindra has SEZs in both of its World City’s, namely Jaipur and Chennai. Interestingly, the Mahindra World City Chennai’s SEZ was leased out quite back from now. Such reforms need stabilization because they are long-term reforms and its impacts are felt for a long time. So, it takes time to succeed.

Q: Mahindra Lifespace Developers Ltd. is majorly present in Southern India. What is your outlook on demand and prices recent future?
A: Houses will be sold at places where people have wherewithal and resources to buy them. It can happen if job opportunities are created and people are comfortable with what they are earning. So, we are mainly looking at Mumbai, Pune and Bangalore while we have opportunistic eyes on NCR. Thus, we are focusing on these geographies at present. When it comes to demand and supply then a factor should be taken into consideration and that is the presence of trust deficit within customers. I feel, demand uptick is needed in these markets and it is happening and we need to make our presence felt in these areas.

Q: The government is thinking about reducing the interest rate in your sector. Do you think that this will be done, if yes, the rates should be reduced by at least what per cent or a special window should be created if it doesn’t happen?
A: The government should work on the front of either interest or should facilitate investment or simply/ease the process of getting funds. Most importantly, it should ease the process of getting approvals and policies as well as make things certain and stable for a period.

Q: Do you think RERA has succeeded or it should be updated?
A: Such regulatory reforms bring transparency and stability in the market because it increases responsibility and accountability of the developers making them be fair while doing business. Thus, at the philosophical level, RERA is very good but it has taken some time to transit from the centre to state level and got implemented because every state has a different point of view on the matter. But in medium to long term, I think, RERA is one of the best things that has happened with the industry. However, teething problems occur every time reform is implemented. It is a very good thing for the branded players as well as for the customers.