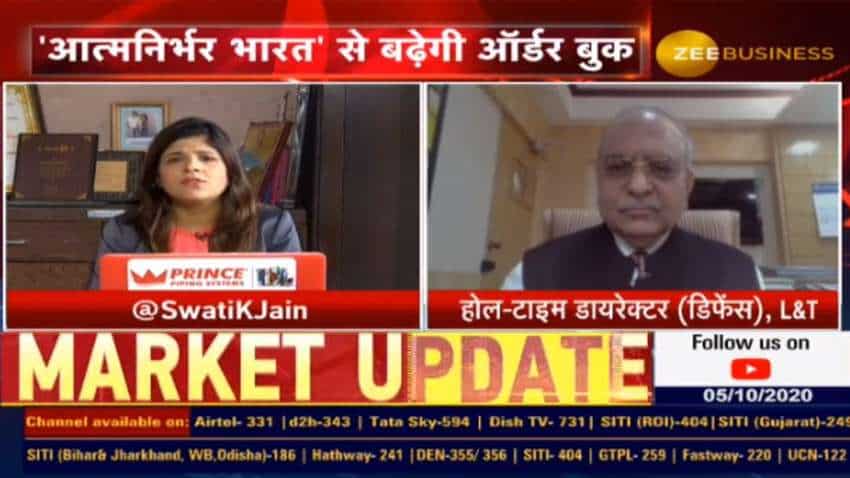 We have been working on Pinaka orders and it has been under production for almost the last 15 years: Jayant Patil
Written By: Jitesh Kumar Jha
RELATED NEWS

Sobha will launch new projects of around 14.50 MMSF in next four quarters: JC Sharma, VC & MD

Q: Defence sector is the flavour of the season as many action and announcements have been made from the government’s end. In fact, a positive development has happened in the sector for defence companies. How will you summarize the defence sector and what is the situation and what kind of action is visible on your company in terms of orderbooks?

A: Rightly said that many of the policy statements that have been made by the government in the last three months have a lot of positivity. The first is the negative list that the government has brought in which 101 defence products will be manufactured within India and will not be imported. The second big thing was the policy document that was issued, which talks about the defence acquisition policy and has been effective from October 1, 2020. Meanwhile, the ministry of defence has also issued the second major policy document as ‘Defence Production and Export Promotion’ policy. The three statements by the government are consistent and seem that the future of the Indian companies will be very different, where a lot of opportunities will be provided to private players along with public players. Thus, both, public and private, will compete with each other for most businesses.

Q: L&T has bagged a big defence contract in the recent past related to Pinaka Weapon Systems. Can you please provide some details about it in terms of size, execution timeline and what is the overall orderbook of the company, at present?

A: We have been working on Pinaka orders and it has been under production for almost the last 15 years. Government of India has bought 1-1 regiment from us but this time the Ministry of Defence has moved an order for six regiments of Pinaka of which orders for four regiments have been given to Larsen & Toubro. This is a contract of around Rs 1,000 crore. Interestingly, this Rs 1,000 crore contract will not only provide work to Larsen & Toubro as we always work hand-to-hand with MSMEs and in this order around 40-50% products will be bought from MSMEs. So, in this contract, Laren & Toubro will work with around 200 industries in the production of Pinaka in different forms. They will be supplying different products, like small components, sub-assemblies and systems and this all together is Rs 1,000 crore order and we have to complete in the next three to three-and-a-half years.

Q: What is your total orderbook at present and what kind of activity is visible on that front? Also, tell us about the kind of new projects you foresee in a couple of years?

A: We publicly announce our defence order book in every quarter. Currently, we have direct defence orderbook stands at around Rs 9,000-9,500 crore and I am not adding the defence construction order to this. This orderbook is equivalent to almost equal to two to two-and-a-half years of output. The new development that is happening has a lot of contracts, which are in pipeline. The biggest one in that is related to submarines and RFP for P75 Indian Submarines is about to come and we have bid for 2-4 warships and few are in pipeline. So, the next 2-3 years are going to be very important because many of the items that I have talked about earlier including the warships submarines are present in the 101 negative lists, which mean these orders will not go to others and orders related to it will be made in India itself. Its acquisition pipeline has started. Thus, its acceptance of necessity has been granted and it has a lot of contracts and varieties including small and big. If I will talk about the small ones then it has contracts ranging between Rs 600-700 crores and it also has Rs 12,000-15,000 crore orders. So, a very big portfolio under the new policy the new RFP’s the government has started announcing covers a lot of things and many more are being added to it.

Q: The sector and segment are very big and you have a presence in specific things like land and now you are looking forward to submarines. So if we talk about the overall book and in light of the opportunities that are coming up from the government then do you have any ballpark figure - apart from this addition to the current order book or Rs 9,000-9,500 crore - for the remaining FY21 and FY22 that you can share with us?

A: Few new contracts will come to us this year but we also sell things of around Rs 4,000 crore annually. So, I do not think that there will be any big difference in the orderbook in the next 5-6 months. We will get orders in this period and sales will also happen, which means the orderbook is not going to grow in a big way, this year. In the next two years, we see that many contracts are in pipeline and they will be added. Right now, I think projects worth Rs 70,000 crore are in pipeline and we will win some of them. If talk optimistically and pessimistically then this number can change from both sides. Currently, the level of orderbook that we have in the pipeline in the land system stands at around Rs 10,000-12,000 crore.

A:  Larsen & Toubro in the last three and a half decades has been into defence sector under which we have had a basic policy since the beginning. The government has talked about being Aatmanirbhar, now, but we have been running towards Make in India for a long time. Larsen & Toubro since the past has been doing things and around 250 of our products and technologies are developed indigenously. We take most of the contracts on our strength, where no foreign is involved. In the complete history, we have just 2-4 contracts where we tied-up with someone. One of those includes Vajra Gun, where we tied-up with Samsung, which later turned into Hanwha. In partnership with Hanwha, a Korean company, we developed a big gun which is known as K-9 Vajra. We did the Vajra project together. At the same time, we did a program with a French company. Thirdly in the area of missiles, we created a joint venture (JV), the world’s largest missile exporter company whose product range is the widest The Company’s name is MBDA. So, Larsen & Toubro and MBDA have created a joint-venture company and have been engaged in it for the last 3-4 years, we have got our license and we have made an investment and created a new factory for it. The factory will move into production this year and will start manufacturing products as well as exporting them before the end of the year. So, it is a start and it will give an output of a few Rs 100 crores this year, itself. The biggest thing is that the joint venture was created not only to export products from here but we will also address the big missile projects that are visible in the pipeline, through it. So, it has created a roadmap for a joint venture but a bulk of competence and capabilities of Larsen & Toubro depends on our technology and products and it will continue in the future as well. We will definitely look towards some partners in exceptional cases. You have talked about the 74% foreign equity then it is only for the new companies that will be created in India. The 100% FDI that was allowed earlier was for dual-use technology, which is not only for use in defence, for instance, you are manufacturing an engine of an aircraft and you want to make in India than you will not need a license for it and you can bring 100% equity form a foreign land and do it. Under it, we didn’t receive any investment in this segment in the last 3-4 years, although the policy was open for a long time. Many foreign companies were saying that in the case of 49:51 bases if an Indian company will have control on it then how can we provide technology to them. The government has increased it to 74% to ensure technology comes to India and under it, we will see from our side that on what percentage basis FDI can come to us.

Sobha will launch new projects of around 14.50 MMSF in next four quarters: JC Sharma, VC & MD

Gunman releases two more of the 19 hostages being held in Georgian bank, demands $500,000