Jet Airways, Vistara give some ticket pricing power to passengers in austerity drive

The move by full-service carriers (FSCs), Jet Airways and Vistara, to unbundle their services and slash airfares stems from the fear of further eroding their market share to the low-cost carriers (LCCs). 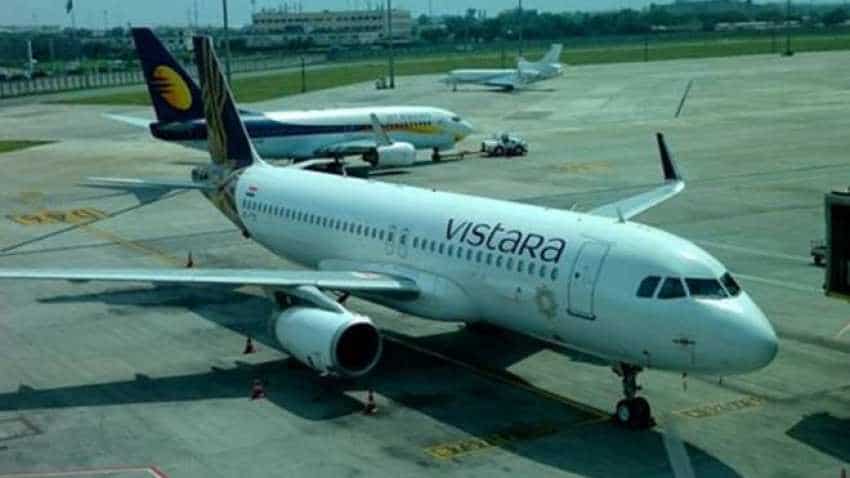 Jet Airways’s market share stood at 13.6% during the month of July. Similarly, it was 3.9% for Vistara. Image source: Reuters
Written By: DNA Money Correspondent
RELATED NEWS

The move by full-service carriers (FSCs), Jet Airways and Vistara, to unbundle their services and slash airfares stems from the fear of further eroding their market share to the low-cost carriers (LCCs). First Vistara and later Jet Airways announced cheap tickets to the passengers if they opt to not have complimentary meals onboard.

And the industry insiders expect that in near future, the airlines may go a step further and offer a menu-based model, wherein the customers can choose to pay for the services they avail during their flight. Aviation experts claim that this menu-based model is being increasingly adopted by the global FCCs in order to stave off the competition from their low-cost counterparts.

Industry experts say cut-throat rivalry has seen LCCs capturing around 66% of market share in India, which is set to increase to over 70% in the next four to five years. Around a decade ago, their market share was just around 25%.

Jet Airways’s market share stood at 13.6% during the month of July. Similarly, it was 3.9% for Vistara.

According to analysts, the development comes at a time when fuel prices, which comprise over 40% of an airline’s operational costs, have been witnessing a spike for the past several quarters. This has left the airlines bleeding.

While Jet Airways and SpiceJet reported losses in the quarter ending June 2018, market leader IndiGo saw around 97% of its profit getting wiped out as compared to the year-ago period.

A forecast by aviation consulting firm CAPA says that Indian airlines are expected to collectively post a loss of $1.9 billion this financial year, led by FSCs. The carriers are not being able to run profitably despite having around 90% seats full and seeing over double-digit growth in domestic passengers over the past over four years.
The industry has over 1,000 planes on order for further expansion.

Announcing the revamped fare deals on Wednesday, a Jet Airways spokesperson said, “The revised offering under fare choices will now allow guests to enjoy more value for money by letting them choose a travel plan based on their preference, travel requirements and budget.”  The sources said that the airline management had been wanting to introduce it since more than a year ago but the move was being opposed by some executives in management as they held the opinion that it may end up diluting the brand.

Tata Group-Singapore airline joint venture Vistara had last month introduced a new economy fare category called ‘Lite’ wherein passengers can avail of low fares and can purchase meals on board if they desire. Further, the Lite passengers, similar to regular economy passengers, can avail of 15 kilogram of check-in baggage. However, it has to be a single bag or else extra charges would apply.

Commenting on the development, Devesh Agarwal, a Bengaluru-based aviation analyst said, “With rising costs, the pressure to reduce food wastage, and competition from low-cost carriers, full-service airlines across the world are offering ‘basic’ fares which unbundle food and baggage. Jet and Vistara are following global trends in this era of “profit-less growth”.