Crisis-ridden Jet Airways has stopped forward bookings for some of its international sectors, including those for east Asia, sources said on Sunday. 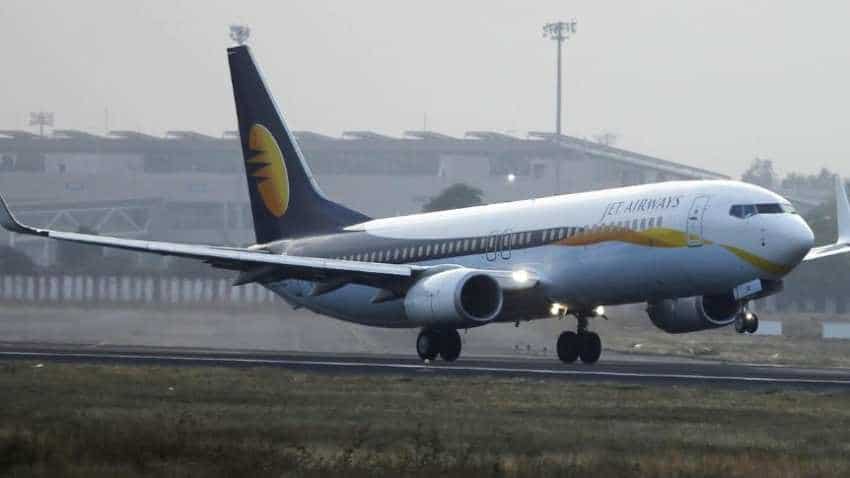 Crisis-ridden Jet Airways has stopped forward bookings for some of its international sectors, including those for east Asia, sources said on Sunday. Currently, the airline has suspended international operations till Monday afternoon.  Accordingly, the company has informed the country`s aviation regulator that it has stopped taking forward bookings for its flights to SAARC and ASEAN destinations including Colombo, Kathmandu, Singapore, and Hong Kong till further notice.

However, sources said, the airline is hopeful of re-starting its London-bound services after April 15, as the flight sees healthy load factor. Other European routes like Amsterdam and Paris are also expected to be restarted.  "They have informed that DGCA about suspension of forward-bookings for SAARC and ASEAN routes. For now, there is no certainty about when the forward bookings for these sectors will be re-started, since everything is dependent on capital infusion, which is stuck with the consortium of lenders," an airline insider told IANS in Mumbai.

"The high summer season demand for sectors in Europe especially for London is a major factor that is expected to push the airline to restart the London route from April 15." At present, the airline is operating only 7 aircraft for domestic operations due to grounding of over 80 per cent of its fleet by lessors, which has resulted in the cancellation of several hundred daily flights, inconveniencing scores of passengers at various airports.

Even the airline`s unpaid employees are upset, they have taken out a silent marches in New Delhi and Mumbai. Other employees, like National Aviators Guild (NAG) Vice-President Captain Asim Valiani told IANS in Mumbai: "The airline is running out of time, with no funds and a truncated schedule, Jet is losing its true financial value."

"We want the banks to stick to their promise and infuse funds immediately. Only with fresh funds will you get any interest from new buyers."  On Friday, the cash-strapped airline suspended its international operations till the weekend after further reduction in its fleet size. The airline has also cancelled domestic flights, leaving passengers stranded at various airports. This led the Prime Minister`s Office (PMO) to assess Jet Airways` financial situation. Jet Airways is expected to approach lenders on Monday for interim funding.

Till recently, the airline operated 26 aircraft, including Airbus A330s, Boeing 777s, 737-800 and ATRs, to various destinations like London, Toronto, Singapore, Amsterdam, Paris, Bangkok and domestic sectors like Mumbai-Delhi, among others. Jet owns 16 out of these 26 aircraft. The airline is in the midst of a severe liquidity crisis that has affected its operations. Currently, the airline owes over Rs 8,000 crore to a consortium of lenders led by the SBI.

The only hope for the airline now lies with an immediate dose of funding and the completion of a stake sale process initiated by the lenders. Speculations is rife that Jet`s ex-Chairman Naresh Goyal, and six other parties have expressed their interest in the process.