Low-cost carrier and top rival SpiceJet appears to be making the most of the crisis at Jet Airways. Spicejet is now hiring engineers and pilots at much lower pay than their current salaries at the financialy-troubled Jet. 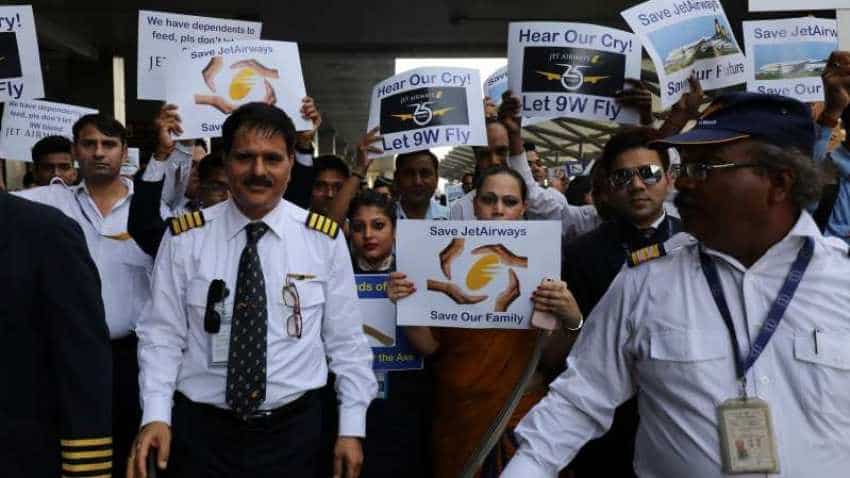 Not long ago, many airlines including SpiceJet were luring the same pilots and engineers with joining bonuses and better perks. Image source: Reuters
Written By: IANS
RELATED NEWS

Low-cost carrier and top rival SpiceJet appears to be making the most of the crisis at Jet Airways. Spicejet is now hiring engineers and pilots at much lower pay than their current salaries at the financialy-troubled Jet. Industry sources told IANS that pilots from Jet Airways are being asked to take salary cuts of 25-30 per cent, while engineers have been advised to settle at 50 per cent of their current pay package. Not long ago, many airlines including SpiceJet were luring the same pilots and engineers with joining bonuses and better perks. "The prospect of closure is certainly one of the reasons for professionals agreeing to take salary cuts. But average salaries at Jet Airways have also been higher than the industry level," a top aviation source said.

A senior aircraft maintenance engineer who has applied to SpiceJet and Air India Express for a job said that he has got an offer in the range of Rs 150,000 to 200,000 a month while his current cost to company (CTC) at Jet Airways is nearly Rs 400,000 a month. "The offer is much lower. It will certainly be a forced choice. We are hoping that some investor would take over Jet and our salaries will remain protected," he said. A SpiceJet executive said that the budget carrier was offering salaries based on their own structure and not the highly inflated one paid by Jet Airways.

A senior commander with Jet Airways said that pilots with 4-5 years of experience are going to other airlines as they are feeling the pinch of salary delays. "They have loans and other financial commitments so they are looking for places where there is certainty of jobs and timely salary payment. Not many senior level pilots have so far left Jet Airways. They are reluctant to go to either SpiceJet, IndiGo or Air India Express as they feel their seniority and salary will be impacted. They do not want to sign 3-5 year bonds," he said.

The flying veteran noted that many co-pilots who do not have much experience generally get about Rs 2.9 lakh salary month at Jet Airways, and they are willing to join other airlines for even less than Rs 2 lakh a month. Among various domestic airlines, only Air India Express and SpiceJet operate Boeing fleets, apart from Jet Airways. Those operating Airbus aircraft fear huge conversion costs for both pilots and engineers and are, thus, reluctant to hire the technical personnel from Jet. "We will have to train them for flying and maintenance of Airbus aircraft. In case of pilots, it will need six months of training, while for engineers the reskilling would take 3-4 months. This means the salary for entire training period will be a huge cost for us," said an executive of a private airline operating Airbus planes.

But aviation experts feel that the current situation is temporary and it will normalise once Jet gets back on its feet. "This is an unusual situation because Jet Airways remains almost grounded. Normally, supply and demand have been in favour of pilots and engineers. Now, it depends on how quickly Jet restarts again. If that happens things will stabilise. I won`t be surprised if many pilots and engineers go back to Jet," said Rajan Mehra, a veteran aviation professional and Chief Executive Officer Club One Air.

Saddled with mounting debt and losses, Jet Airways is fighting for its survival. The airline is in gradual descent and staring at closure with nearly 90 per cent of its fleet on the ground.