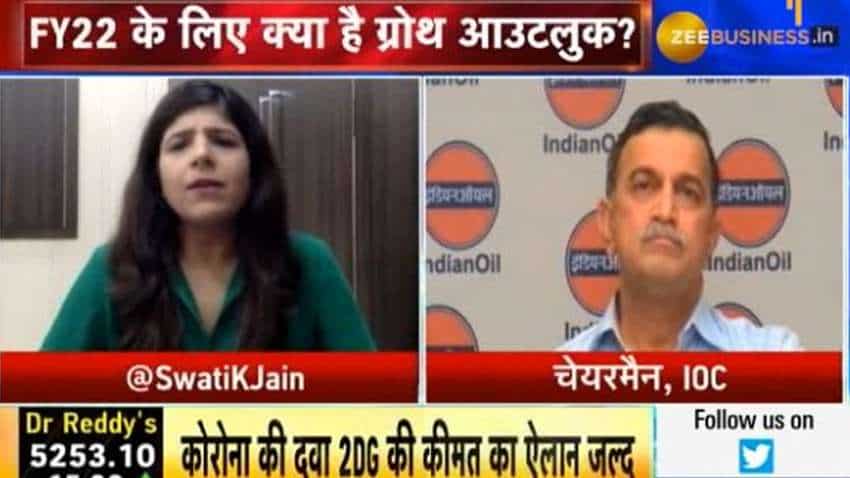 LPG gas cylinder online booking OFFER: SAVE up to Rs 800 - Check who is eligible, how to apply, last date and more

Indane Combo Double Bottle Connection: Now, apply for 5 kg Chhotu cylinder along with 14.2 kg cylinder—All you need to know about this IndianOil offer

Q: How has the quarter has been for the company and GRM margins have seen a good rise. What helped the numbers?

A: Our refinery run from the first quarter then you will see that the maximum demand destruction occurred in the first quarter of last year due to nationwide lockdown. Therefore, our refinery run of the first quarter stood at 69%, in the second quarter it was at 73%, in the third quarter it was 94% and in the fourth quarter in January refinery run stood at 98%, in February and March it was at 94%. And overall, we ended the year at 95%. So, the increase in capacity utilisation, because the demand went up, is one of the main reasons. In this, I would like to tell you that our team at the refineries – refinery, pipeline and marketing – ran a refinery in such a way in these challenging times – as COVID was there for everyone – was a great thing because when the country needed the demand we were there. Secondly, our cracks, which was suppressed a lot in the first two quarter improved in the third and fourth quarter. These were the things that helped in the margins. In fact, both, the improved Cracks and better refinery capacity utilisation, led to the betterment of the margins. If I will talk about the GRMs, which was indeed very impressive, in 2020-21 total GRMs stood at $ 5.64/barrel against Singapore’s $0.54/barrel. In the fourth quarter, the GRMS stood at $10.59/barrel and Singapore was at $1.79/barrel. So, we have been consistently outperforming the Singapore GRM by virtue of better cracks and high capacity utilization.

Q: Going forward, what is the outlook, specifically about the margins? Do you think that this margin is sustainable? With crude oil prices going up what is your view on crude?

A: Your question is right but if our cracks continue to improve - the way demand is going up, it is firming up in the global scenario. Our cracks were quite low in the first two quarters - at a point, there were negative cracks – has improved a lot now, MS is around $6 and diesel is at $4.50. So, if the cracks strengthen further, as they used to be 2 years back when they used to be double-digit (above $10), then GRMs is certainly sustainable. Because refinery from it side constantly does certain things, as high capacity runs to reduced energy consumption, to reduce the input cost. And if we are supported by good cracks then the GRMs are sustainable. Hopefully, it will remain sustainable.

Q: What impact the second wave of CORONA will have on fuel demand? What are the labour conditions because your company was not able to do maintenance at some plants due to a shortage of workers and technicians? At what capacity are you working currently?

A: April, when we started in the New Year, the capacity of our refineries stood at 96% and currently it stands around 84%. So, the demand has declined by around 10-15%. But this time, there is not a sharp drop in demand like the last year because there is not a nationwide lockdown, it is localized. As far as contract labours are concerned, then all of our refineries are running at the moment but the Guwahati Refinery is presently in the shutdown and it is a planned shutdown it is not because we got issues. It is a planned shutdown and we are not facing any problem in getting the labours. In fact, all our projects are running in all the refineries, including the mega projects. However, manpower has declined a bit, I would not say that everything is running normal but it has not affected the work to that extent as it happened in the last lockdown.

Q: What are the plans of the company regarding electric vehicles (EV)? Also, recently, your company has signed an MoU with an Israel company Phinergy for the development of aluminium-air batteries. Can you throw some light on hydrogen FCEV projects and the company is set to roll out 50 hydrogen buses from its Haryana and Gujarat refineries?

A: Phinergy is an Israeli start-up company and IOCL has a joint venture with it and it runs on the technology of aluminium air oxide batteries. Its specialty is that the country is rich in aluminium resources, so our dependency on lithium will be less. This is why IOCL is pursuing it and very shortly we will be putting up a plant in India for these aluminium air batteries. All our automotive companies are very much its field trials and they have already come forward. This is all about the batteries of electric vehicles. Secondly about hydrogen, then hydrogen will be the fuel of the future. It is true that if we want to move towards net zero carbon then hydrogen will be the major player in achieving the net-zero. For this IOCL, its Gujarat refinery is establishing a suitable for hydrogen fuel cells plant, it is a purification plant of hydrogen. We already have a hydrogen plant at the refinery but the purity it needs for the fuel cells, termed at 'five-nine purity, or 99.999 per cent. So, facilities of this purity are functional at the Gujarat refinery and we will run 560 buses from Gujarat refinery to Sabarmati Ashram and Status or Liberty. We will run buses at these two places using this hydrogen. We have got very ambitious plans. Initially, hydrogen is not cheap it is quite costly because it is coming from natural gas but we will supply it in an affordable range to run the buses, so that, Hydrogen which is our dream, to take it forward, we are taking a very big step in this direction. Besides, at many places, like Jodhpur, we are going to produce hydrogen from renewable energy that is from wind turbines. So, it will be green hydrogen. The hydrogen to be produced in the Gujarat refinery will be grey hydrogen and the one produced in Jodhpur will be green hydrogen because it is coming from renewable power. Here also, we have a plan, which hasn’t firmed but we have plans to run buses there as well.

Q: What is going to be the CapEx and expansion plans for FY22?

A: Last year, we made several refinery expansion plans. You would know Panipat refinery is expanded from 10 million tonnes to 25 million tonnes, Gujarat refinery is being expanded from 13.7 million tonnes to 18 million tonnes. We are bringing a new refinery in CPCL at Nagapattinam Refinery and that is the Cauvery basin refinery. This is going to be a 9 million tonnes Greenfield refinery. In Addition, many more projects of petrochemicals are coming like PSTP in Paradeep, catalytic dewaxing unit at Haldia refinery. Bringing all these together, our CapEx plan for next year stands at Rs 28,547 crores, of which refineries contribution is the most about 48% and pipelines of 47%. So, our CapEx plan includes Rs 11,000 crore for the refineries and Rs 7,500 crore is for pipelines, Rs 7,500 crore is for marketing and then the rest for R&D and gas business development. So, we have a CapEx plan of Rs 28,547 crore for next year. And, this year, we had a CapEx plan of Rs 26,233 crore and we have achieved it 103%. So, despite the COVID, we were able to manage our CapEX in exceeding the target.

LPG gas cylinder online booking OFFER: SAVE up to Rs 800 - Check who is eligible, how to apply, last date and more

Indane Combo Double Bottle Connection: Now, apply for 5 kg Chhotu cylinder along with 14.2 kg cylinder—All you need to know about this IndianOil offer