Indian Oil has a CapEx of around Rs 25,000 crore for this year and we are confident that the targets will be met by the end of the year, says Sanjiv Singh, Chairman, Indian Oil, in a candid chat with Zee Business. 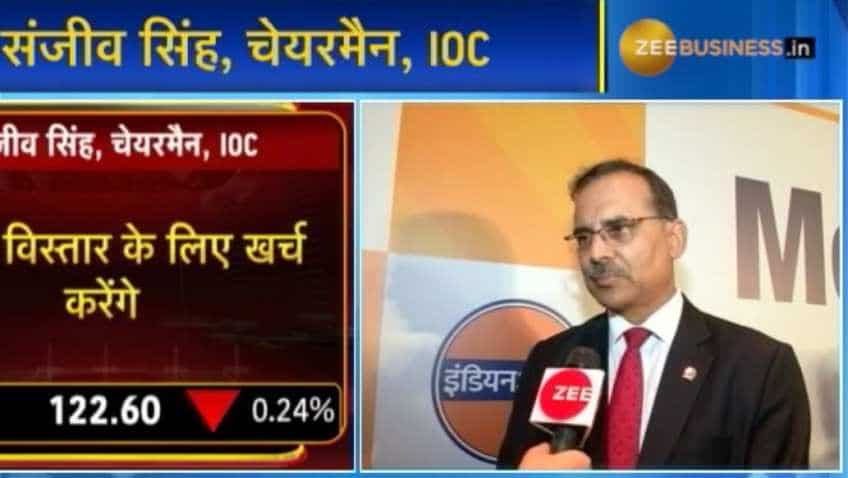 Where are your favorite OMC stocks headed? HPCL vs BPCL vs IOCL - Here's what experts say

Indian Oil has a CapEx of around Rs25,000 crore for this year and we are confident that the targets will be met by the end of the year, says Sanjiv Singh, Chairman, Indian Oil. In a candid chat with Anurag Shah, Zee Business, Singh said, “work on West Coast Refinery project is a prestigious project for the country and it is facing two major issues and they are land acquisition and finalization of design and configuration of the refinery”. Edited Excerpts:

Q: What is the CapEx goal for the entire year? Will the fall in crude prices in the second quarter will lead to an inventory loss?
A: Indian Oil used to invest about 22,000-23,000 crore CapEx annually and this year our target is around 25000 crore and we are confident that we will be able to achieve the goal of achieving the CapEx. This CapEx will be used in modernization of our refinery, infrastructure and pipeline projects as it will consolidate things and improve efficiency. As far as crude prices are concerned, whenever prices fall, there is a definite inventory loss, but it also has some plus points. Crude refining is an energy-intensive process and the falling price of the crude reduces the internal energy cost of a refinery, who uses almost 9% of the crude to meet its own internal energy needs. Less crude prices are beneficial for both India and Indian Oil because we are mainly dependant on imported crude, it reduces our forex outgo as well as borrowing and financial cost of borrowing. It may lead to inventory losses in a short-term but when seen in the long term, then it also has its benefits.

Q: Update us on the relocation of the West Coast Refinery project?
A: As far as the West Coast Refinery project is concerned, it is a prestigious and important project for the entire nation. It is the world’s largest greenfield refinery project. Three oil marketing companies Indian Oil (IOC), Bharat Petroleum (BPCL) and Hindustan Petroleum (HPCL) together with Saudi Aramco and Abu Dhabi National Oil Co (ADNOC) are associated with the project. However, there are two issues related to the project and they are (i) land acquisition and (ii) finalization of the design and configuration of the refinery. As far as design work is concerned then we have surveyed the market and completed our study on the kind of petrochemical that should be manufactured and its quantity. Refineries configuration has been prepared in an association of an Indian consultant and now an international consultant will be engaged into it to fine-tune the project. Interestingly, these activities are running parallelly and it doesn’t have any direct connection with land acquisition or site conditions. So, all backend work that has to be done for this project is running at full speed. The second location that has been suggested by the Government of Maharashtra has been analysed technically and found to be perfect for establishing the refinery. Interestingly, the process of land acquisition has been started by the state government. So, both the activities are running parallelly.

Q: BSVI fuel will be launched out across the nation from April 1, 2020, but auto companies want that it should be rolled-out earlier from the D-Day. Any probabilities of the same?
A: BSIV fuel was implemented across the country by us on April 1, 2017, and after that was given a mandate of launching BSVI fuel by April 1, 2020. Interestingly, no country in the world has been able to move from EURO IV to EURO VI or BSIV equivalent to BSVI in a short span of just three years. So, it was a big challenge for the refineries, and it is being done by them. Similarly, it is also a big challenge for the auto companies who are supposed to jump from BSIV to BSVI, which is a vantage of the vehicle. It is a challenging task for us and if we are supposed to deliver the fuel in the entire market from April 1, 2020, then we will have to start producing it at least two to two-and-a-half months earlier from the D-Day. Therefore, every refinery will start providing the BSVI fuel at least 2 months before the day starts.

It is a very big integrated marketing network and channel because we are supposed to provide BSVI fuel to every petrol pump and its nozzles by April 1, 2010. Thus, this exercise of flushing and switching over to the newer fuel is a two-months exercise and we will try to provide the same quite before the day but today it is hard to make any commitment on it.

Where are your favorite OMC stocks headed? HPCL vs BPCL vs IOCL - Here's what experts say