Sanjiv Singh, Chairman & MD, Indian Oil Corporation (IOC) Limited, spoke about the concerns related to crude, the impact of inventory losses and expansion plans among others during an interview with Zee Business, on the sidelines of World Economic Forum, Davos. 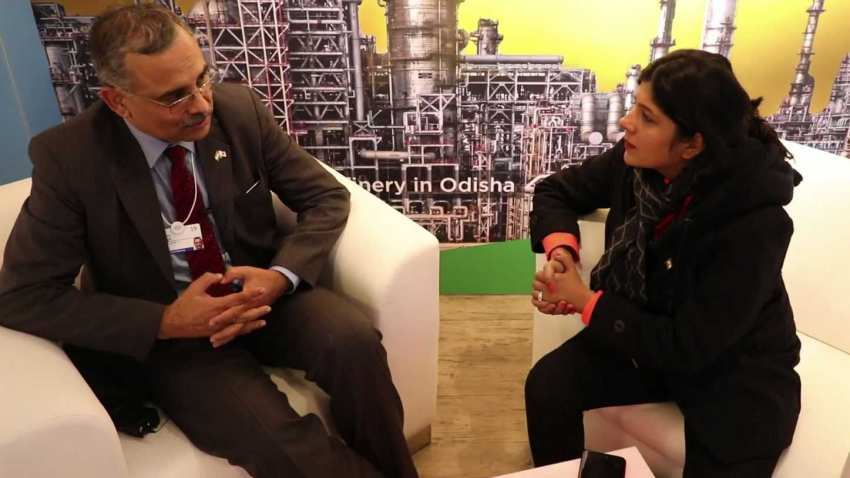 Sanjiv Singh said that "Our CapEx for the year stands at around Rs22,000 crore and will be the same for next year or little high from here." Image source: Zee Business

Sanjiv Singh, Chairman & MD, Indian Oil Corporation (IOC) Limited, spoke about the concerns related to crude, the impact of inventory losses and expansion plans among others during an interview with Swati Khandelwal, Zee Business, on the sidelines of World Economic Forum, Davos.  Edited Excerpts:

Q: Crude price is a global concern but has been rangebound around 60 $/barrel at present. Do you think the current levels are here to stay? What is your outlook on crude prices?
A: Crude price prediction is not an easy task for anyone including me and considerable volatility has been seen in the recent past. We have seen price fluctuations of around $2-3 in a day and it has happened in recent past. We have seen the case, where the prices went up to highs of 80 $/barrel and a sudden fall and a new upward trend is visible.

Besides demand and supply, other factors like political factors also play an important role in this fluctuation. Interestingly, crude prices didn’t saw a sudden rise despite a production cut plan was announced but is showing an upward trend. Let’s see what happens as different agencies and experts have predicted that the US will increase crude supply in the global trade while few countries will go by the agreed terms and reduce the supply. But, I feel that it will be rangebound. The only thing is that the previous predictions suggested that the range will fluctuate between plus/minus 5-7 dollar has been moved to 60-80$. Thus, this is a wide range. So, let’s see where the prices will stand.

Q: Heavy inventory losses are expected in Q3 FY19. Will this have an impact on IOCL?
A: Its impact hasn’t been calculated yet but the fall of prices in the last quarter will have an impact

Q: Let us know about the impact that Rs 1 deduction in excise duty had on your accounts? How you are looking at it, which is an additional burden?
A: It must be termed as a burden as no one ever thought that such a sharp fall. That’s why the government took a call on excise duty and VAT was reduced by several states and they expected the same from the OMCs and we went with it. Incidentally, there was a steep decline and are going up once again. Now, the retail prices are fluctuating in accordance with the market trend.

Q: You have announced a combined refinery plan in Ratnagiri. Any update on it?
A: When it comes to refinery expansion than massive projects, to prepare itself for the BS VI norms, is on in every refinery, which will be ready by end of the year. Apart from this, the expansion plans are either approved or an in-principle approval has been given to all refineries of Indian Oil. Major approvals have been given to Gujarat and Barauni while stage-I approval has been given to Panipat refinery. Big expansions plans are on the card and they are being executed along with petrochemicals. When it comes to West Coast refinery than it is a 60 million of which 50 per cent is an Indian consortium and remaining 50 per cent is a foreign consortium, which is being led by Saudi Arabia. Land acquisition process for the project is on and the project will be fast paced as soon as the land acquisition process is completed.

Besides the backend activities like a market survey for petrochemical, configuration finalisation and review have finalised or have reached an advanced stage.

Q: Will it be achieved comfortably?
A: Yes, and comfortably. We have been achieving the annual CapEx since so many years and will meet it this year too.

Q: I would like to know about IOC’s plan for electric vehicles (EVs).
A: First, I would like to inform that EVs must not be compared with ICs, which includes both diesel and petrol engines. Comparison between the two is not going to be an apple to apple comparison as electricity is used for mobility in case of EVs while fuel is used in another case. The true comparison can be achieved by looking at the life cycle of the two. If EVs, that is driven through a battery or electricity, are seen in isolation than they are technically more efficient than IC engines. But, in terms of life cycle, neither the cost price nor the impact on environment wise I think they are better and improvements is expected.

I would like to commit that we will meet the energy requirements for the growing mobility and its demand, especially in the transport sector. We are very confident that the demand for conventional fuel will continue to grow for more than a decade from here. This growth will be taken care by other forms of transport including EVs and us, Indian Oil, will try to fit in at places wherever it is required.

Q: What are your expectations for the sector from the upcoming budget?
A: We will expect that every petroleum product is brought under the ambit of GST as it will help the sector and excel towards the Ease of Doing Business.

Q: There were talks related to the reduction of excise duty by 2-3 per cent on ETFs.
A: I am not aware of the change in ETF if something has happened. Incidentally, ETF prices have gone down in accordance with the fall of the product prices in the global market. So, there has been a significant fall in the past two months. Let’s wait and see the future prices and government’s call on it.