Sikka also believes that the Indian IT companies need to grab the opportunities provided by new technologies like artificial intelligence in a big way to retain its global leadership edge in this fast changing infotech environment. 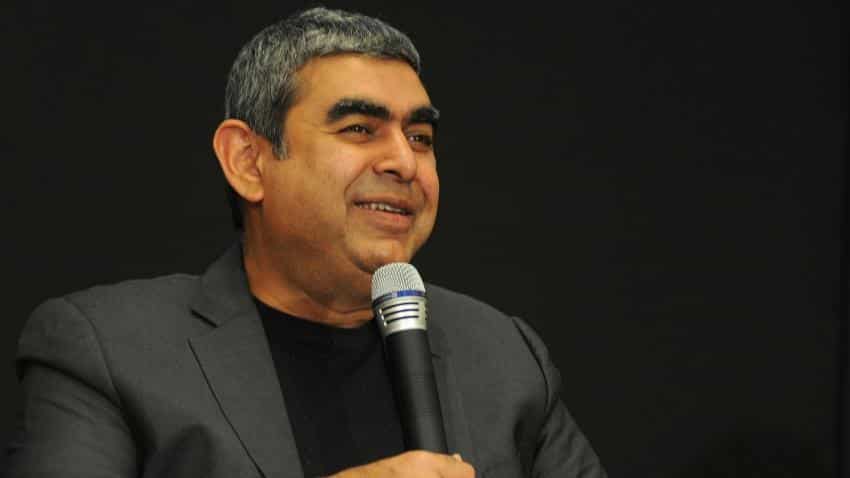 Infosys CEO Vishal Sikka has refuted the general impression that the Indian IT industry is overly dependent on H-1B visas for its business mode, amid the Trump administration's crackdown on firms abusing the visa system to hire foreign workers on a low wage.

Sikka also believes that the Indian IT companies need to grab the opportunities provided by new technologies like artificial intelligence in a big way to retain its global leadership edge in this fast changing infotech environment.

"It is wrong to say and to think that we are dependent on H-1Bs. For example, if you look over the last 10 years, there are about 65,000, something like that, H-1B visas granted every year.

That means over 10 years it is 650,000. And we collectively employ millions of people. Infosys alone has 200,000 employees. TCS close to double that number and so on," 50-year-old Sikka told PTI in an interview.

So, the assumption that Indian IT firms are dependent on H-1B visas is not correct, he said in response to a question on the charges that the business model of Indian IT companies is based on H-1B visas and major Indian IT firms like Infosys, Wipro and TCS are expected to be hit by the Trump administration's crackdown on firms abusing the visa system.

In fact, Prime Minister Narendra Modi is expected to raise this issue with US President Donald Trump during his White House meeting here next week.

During his wide ranging phone conversation from Palo Alto in California, Sikka acknowledged that in the last decade and a half, there was a lot of usage of the H-1B visas. "But, ultimately it has always been about delivering value," he asserted.

"The Indian IT industry has delivered a tremendous amount of value, especially in the US. But the nature of that value delivery is changing dramatically. Just as in the past it was easier and it was possible to move jobs to India or to companies where large amount of work would happen in India. So, these kind of a global delivery model or onsite, offshore and so forth...More and more of the work can now be done with the automation," he said.

Responding to another question, Sikka said since more and more of the work is now becoming automated, the Indian IT companies need to focus much more on the innovative areas, on the new areas, on the areas that are the frontier areas.

"Like artificial intelligence (AI), like machine learning, like internet openings and you know, voice interfaces and chat interfaces, virtual reality, cyber security and these kinds of things," he said.

Indian IT companies, including his own Infosys, have embarked on this new path, he said. "I think that in general we are, the industry is still in the early stages and I'm very happy with what we are doing at Infosys," he said.

"We have also given back a lot over the last 35 years. And now we have a plan to bring in 10,000 new generation jobs here in the US in the next two years. We already started down that path, we opened our first center already in Indianapolis. We are going to hire 500 people there by next year. We will have other centers that will be coming up in the near future," he said in response to a question.

He said the Indian IT industry already contribute a lot to the US economy and it will do even more.

"We are committed to the US economy. So I think that in addition, beyond hiring and the local economy and the contribution and so forth, it is about innovation. It is about creating jobs with new kinds of skills," Sikka said.

He said the 10,000 jobs that they plan to bring in the US are all high skilled jobs and in the innovative new areas, like AI, new interfaces, cloud based technology et al.

"In order to that, we have to train people. We are creating a huge amount of training and skilling programme to help create these jobs, create these skills. All our centers are not really innovation centers where we deliver value to client, but it is also training centers where we hire kids out of colleges as well as adults and either skill them or deskill them in these areas," he said.