India at a position of being price maker of Sugar; it must not miss the opportunity: Atul Chaturvedi, Shree Renuka Sugars

Atul Chaturvedi talked about his expectations from the government in the budget and efforts that can make sugar industry into a profitable sector among others in an interview with Zee Business. 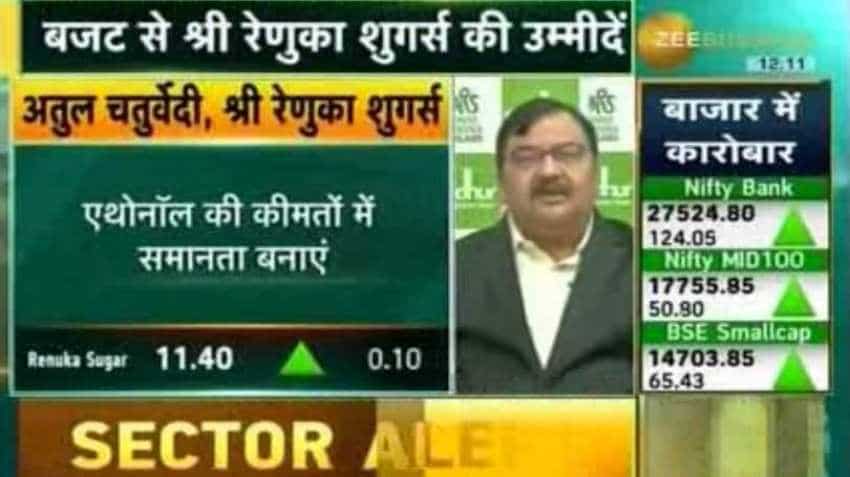 Atul Chaturvedi said that the government’s recent support on sugar has helped the industry to reduce the outstanding arrears in some states like UP. Image source: Zee Business

Atul Chaturvedi, Executive chairman of Shree Renuka Sugars Ltd and President of Solvent Extractors Association of India, said “The government should raise the fixed MSP on sugar from Rs29/KG to Rs34-35/KG as India is in a position where it can set the prices of sugar and the world will have to buy its product as per decided rates”. “There should be a rationalisation in the price of ethanol which is being sold at three different prices,” he added.

In an interview with Swati Khandelwal of Zee Business, Chaturvedi talked about his expectations from the government in the budget and efforts that can make sugar industry into a profitable sector among others. Edited Excerpts:

Q: Your expectations from the interim budget that will be presented this year?
A: As a president of Solvent Extractors Association of India, I would like to talk about vegetable (edible) oil sector and then move to sugar, a sector that has been supported by the government in last 6-8 months.

But, the edible oil segment is being neglected since the past two decades and that is a reason that India is importing almost 70 per cent of edible oil, which is not a healthy situation. Only good thing in this story is the revenues that the government is earning through customs duty through the imports. It earns revenue of about Rs30,000 crore. We, the edible oil industry, want that the government start paying attention to the domestic edible oilseed sector and divert a part of its earnings (revenues) towards the development of the sector. It should also create an oilseed development fund that will ensure that there is an increase in oilseed cultivation in India. For the purpose, it should encourage mustard cultivation within the country. And, farmers of Punjab and Haryana should be incentivised to divert themselves from wheat and rice to cultivation of mustard and maize. The exercise will also help in maintaining the water table in the two states.

Apart from this, the government should also enlarge the definition of food security, which is restricted only to wheat and rice, by including edible oil to it. Duties on edible oil should be kept high as it will support the industry. In addition, it should try to increase the duty differences between the crude oil imports and refined oil Palmolive imports from 5 per cent to 15 per cent or else it the main objective behind Prime Minister’s Make in India will fail on this front.

Q: Also let us know about your expectations for the sugar sector?
A: Before going to sugar, I would like to add something else related to an anomaly in edible oil report. The report says that India and Malaysia had an agreement under which Malaysia is provided with an advantage of 5 per cent on duties over the edible oil that is imported from Indonesia. We, the industry, want that same duty should be slapped on imports from both the countries.

Now, I will talk about sugar. The government’s support on sugar in recent past has helped the industry to reduce the outstanding arrears of the farmers in some states like Uttar Pradesh. But there is an aberration related to the fixed minimum selling price (MSP) of Rs29/kg and we feel that this MSP should be taken up to Rs34-35/kg. As the present MSP is not sufficient to make the industry profitable, which indirectly will have an impact on the farmers, who will not be able to earn profits on his product and will not be able to receive their payments on time.

But, there is a section in the government who feels that any rise in the MSP will affect exports and we feel that it is not a wrong assumption as India is a home of world’s surplus sugar and is in a position of being a price marker, not a price taken at present. Thus, the world will have to buy sugar at high prices from India. In fact, it is an opportunity for India and that’s why they should raise the MSP.

The second issue is related to the aberration in ethanol, the segment that has been supported by the government. Three different prices are the only aberration associated with it and we want that it should have a single price, which is a balance of all three.

Q:  Do you think that Shree Renuka Sugars will be able to meet or exceed the projected targets in terms of sales, top line, bottom line and margins, for FY19?
A: There is an improvement in our operations. Our crushing activity has increased by 20-25 per cent and the refining activity is in full swing. When it comes to capacity utilisation, then Kandla unit’s capacity is being used at its fullest, that is, 100 per cent. I believe that this year is going to be a good one for us. Secondly, Shree Renuka Sugars has turned up to be a subsidiary of Wilmar. This association helps us by increasing the inflow of international information for us.

I feel all these activities will add to our profitability this year.