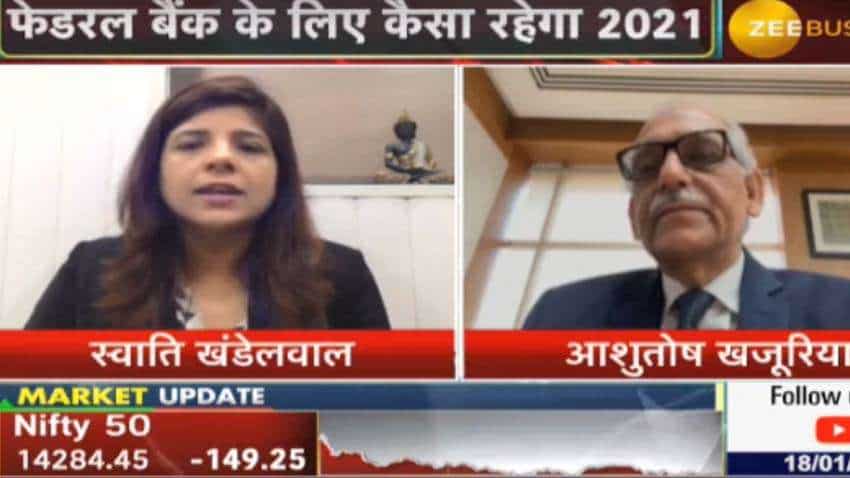 Q: Union Budget 2021-22 is round the corner, so, let us know about your expectations that you have from the government in this budget to push a good push to the banking sector, as RBI has raised concerns that NPA would go up from these levels?

A: Whenever a loan is given and if you see that there is slight inflation in the market, i.e. there is no slowdown or deflation or recession and there is inflation, then there is natural corrosion in debt. The debt is reduced by itself because the price of everything increases, sales also go up in nominal terms, therefore the payment of any loan becomes easy. I want to say here is growth rate is in the root of everything. If the growth rate is increased, real growth rate, and then inflation remains at a moderate level, then your nominal rate of growth is increased. For instance, if the real growth rate stands at around 7% and inflation stands at 4% then you will get a nominal growth rate of 11%. So, the payment of banks interest, banks EMIs, government's revenue and income depend on nominal GDP. If the nominal GDP goes up then the banks should be benefitted from it. And, if the growth rate is high and there is light inflation with it, then the companies who feel that they are under a stress can easily come out of the stress but the demand for their product should be sufficient. And buying power should be there to increase demand. We, in India, were a bit lucky as the large population is connected to the agricultural sector, which despite the COVID has provided a good growth rate, which stood at around 3.5-4%. A very big population was at comfort that their production has been good, consecutively, the three to four crops, Kharif, Rabi and then again Kharif, have been good. It seemed, as if the inflation rate, which has reached up to 7.61% would go above 8% quite above RBI's target of keeping it within 4-6% - in fact between 2-6% but I am not talking about 2-4% now because inflation has increased - and there was a need to bring it into the 4-6% band. You saw when the production was good and inflation figures were released then it dropped below 5%. This is a good sign as the primary sector has got a good hold. Primary articles or food items has 45% weightage in the consumer price index (CPI). I want to say that if the government through the budget gives a push to growth, pays attention to it, spending increases and the money comes to people, i.e. there is moderation of the tax. I believe it will accelerate the process a bit.

Q: You are getting positive indications about growth and we have seen that the government has supported the Public Sector Banks (PSBs). But what kind of additional support do you feel will be provided to PSBs in the form of recapitalisation that is needed by the bank to maintain its capital adequacy ratio?

A: There is a saying 'Proof of the pudding is in the Eating'. If you have a look at the old track record of the government, whenever there was a need for capital then it was provided. The time, when the announcement was made, about 3-4 years ago, a capital of around Rs 2,10,000 crores is required then some doubts were expressed in the market that how the government will be able to give so much as there will be a challenge of fiscal deficit among others. However, the bonds that are issued are normally not shown in the fiscal deficit as they are on long-term. Secondly, in return of that, the government buys the equities of those PSBs. Thus, it creates an asset against it. I do not want to go into its semantics but would like to say that whenever the public sector banks have needed capital, they got sufficient capital, whether it was in tranches or at once. After that, the reforms which were undertaken, whatever improvements have been made and consolidation has happened under which only 12 public sector banks are left till date. And, there is a possibility that the number would be less than 12 even. So, I think, the availability of capital should not be a question, given the old track record. As far as provisioning is concerned, my estimate suggests that the restructuring facility put in place by the RBI would delay its immediate impact on the books of the banks. It is a situation, where if some Oxygen is provided to the borderline cases then you will be able to revive them. So, whether the banks are providing capital to them through the Guaranteed Emergency Credit Line (GECL)loan, there is a central government's guarantee in this. So, either you are providing capital to them through this mechanism or are restructuring them and rescheduling their repayments schedules and increasing it by two years under the RBI's plan. For instance, if you consider that the remaining maturity period is five years then you can take it up to seven years. By doing this, you can defer the immediate outflows of the ventures and the time will say how many of those will survive and emerge stronger. But it is true that this will definitely reduce the immediate impact on the balance sheets of the banks. So, in the coming time, you will know how much benefits you get from it.