Foxconn Industrial Internet is yet to finalise the size of the initial public offering (IPO), but it plans to use the proceeds to finance investments totalling 27.3 billion yuan ($4.3 billion) on areas including cloud computing, data centre and 5G related projects, according to the prospectus filed on Monday. 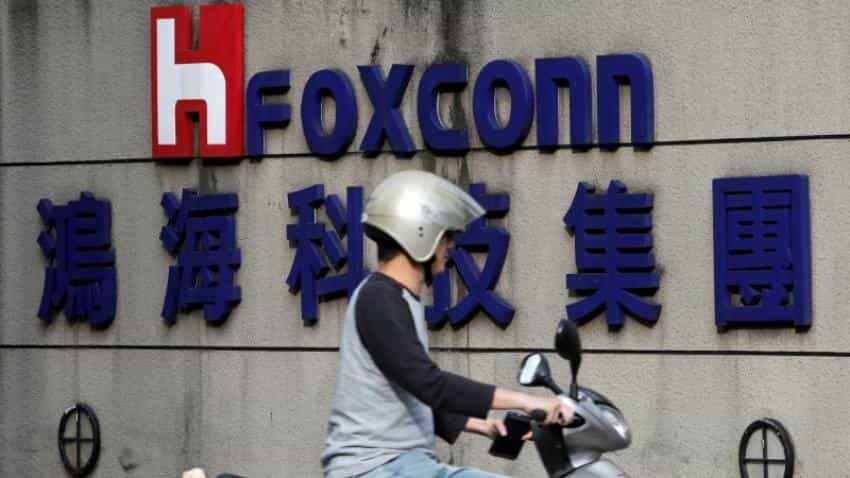 A motorcyclist rides past the logo of Foxconn, the trading name of Hon Hai Precision Industry, in Taipei. Photo: Reuters
Written By: Reuters
RELATED NEWS

An internet and industrial-focused unit of Taiwanese electronics manufacturer Foxconn plans to sell 30 percent of its public share offering in Shanghai to a group of cornerstone-type investors, its prospectus showed, a rare move in China listings.

Foxconn Industrial Internet is yet to finalise the size of the initial public offering (IPO), but it plans to use the proceeds to finance investments totalling 27.3 billion yuan ($4.3 billion) on areas including cloud computing, data centre and 5G related projects, according to the prospectus filed on Monday.

It aims to issue up to 1.97 billion A-shares, or 10 percent of its enlarged capital, at a price to be determined.

The company didn`t immediately respond to a request for comment on how much it plans to raise from the IPO.

Unlike most Chinese listings which only have two tranches of investors - institutional and retail - the firm`s float will also bring in several strategic investors that will be locked up for at least 12 months.

Such investors are commonly known as cornerstones and are a long-established practice in several Asian markets including Hong Kong. They have increasingly been used to bolster demand for large deals.

A total of 72 percent of the $8.1 billion raised by Postal Savings Bank of China in 2016 in Hong Kong was taken up by cornerstones.

Chinese regulators do not officially call them conerstone investors, but sources close to the Foxconn deal said they are similar to conerstones.

Foxconn unit`s IPO, which would be the largest domestic listing since China`s stock market crash in mid-2015, comes at a time when Beijing steps up its efforts to encourage Chinese "new economy" companies to list in Shanghai and Shenzhen.

The China Securities Regulatory Commission (CSRC) is also targeting the likes of Alibaba Group, Xiaomi Inc and JD.com by allowing them to seek a listing in China, using the planned Chinese depositary receipts (CDRs) route.

"Beijing is keen to attract BAT-type tech giants to the home market," said one person close to the Foxconn unit transaction, declining to be named due to sensitivity of the matter.

"If Foxconn still wants to do a sizable IPO, it cannot take up too much liquidity in the secondary market. It has to secure part of the proceeds with cornerstone investors."

The CSRC, therefore, has barely approved cornerstone-type investments in a bid to prevent potential conflict of interest, said people with knowledge of the matter.

However, with a strong pipeline of mainland IPOs and expected CDR issuance, such moves won`t likely be an one-off practice, the people said.