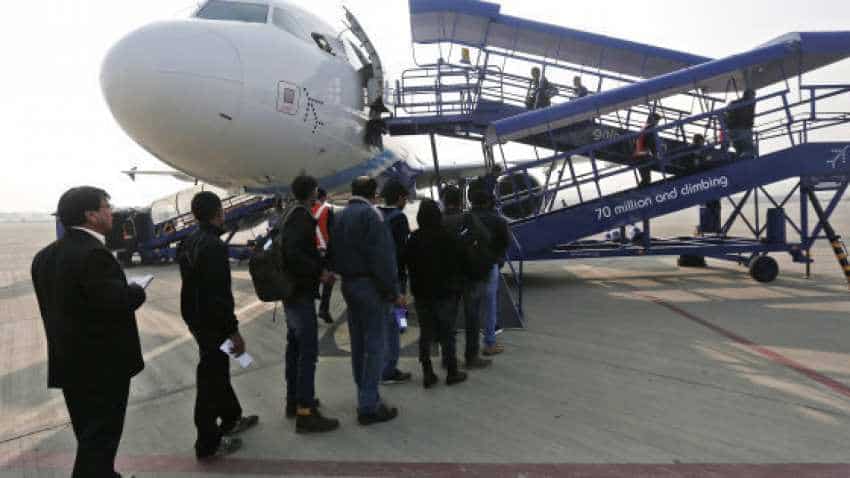 However, the March numbers came as a shocker to the airline industry as the traffic though continued to grow in green but almost flat at 0.14 percent to 11.59 million passengers up from 11.58 million a year ago, largely due to the huge capacity reduction following the troubles at Jet Airways in the month, show data released by the DGCA Monday.

The cumulative traffic of domestic carriers stood at 171.25 million for the full year to March 2019, registering a growth of 14.25 percent. Budget carrier IndiGo continued to be the largest player with a market share of 46.9 percent ferrying 54 lakh passengers during the month, while its closest rival SpiceJet was a distant second with 13.6 percent traffic pie as its ferried 15.81 lakh passengers in the reporting month.

The flat growth in traffic is a setback for the industry which had been clipping at over 20 percent for more than four years in a row. Significantly, betting on the double-digits growth in the past four years, the government in its vision document released this January, has pegged the traffic volume to 1.1 billion by 2040.

Jet Airways, once the second largest airline after no-frills IndiGo, lost as much as nearly half of the market share at 5.37 percent during March as against 10 percent in the same period of last fiscal, according to the data. Together with subsidiary JetLite, consolidated traffic of the now non-functional carrier was 6.71 lakh passengers in the month, whereas in the same period last year it had flown 15 lakh passengers.

Significantly, national carrier Air India, which has a number of aircraft on ground for quite some time now, had the dubious distinction of cancelling the most number of flights at 8.94 percent of its scheduled departures followed by JetLite and new entrant Star Air, as per the data. The national carrier, however, managed to get the third spot after IndiGo and SpiceJet in passenger volume, carrying 15.19 lakh passengers with a market share of 13.1 percent in March.

The passenger load factor in the month has shown falling trend compared to February due to the end of the vacation period. SpiceJet continues to clock the highest average seat occupancy at 93 percent while smaller rival GoAir topped the on-time performance chart for the sixth consecutive month in March at 95.2 percent.

Meawhile, according to the DGCA data, SpiceJet had the most number of passengers affected due to the flight cancellations at 2,35,831 and the airline paid a compensation of Rs 42.11 lakh, while Jet Airways along with its arm JetLite, which cancelled a large part of its operations in March, had only 26,185 passengers affected by the flight cancellations, for which it paid a compensation of Rs 9.82 lakh.

Air India, on the other hand, was forced to pay the higest amount of Rs 119.37 lakh to 2,508 passengers for denied boarding.