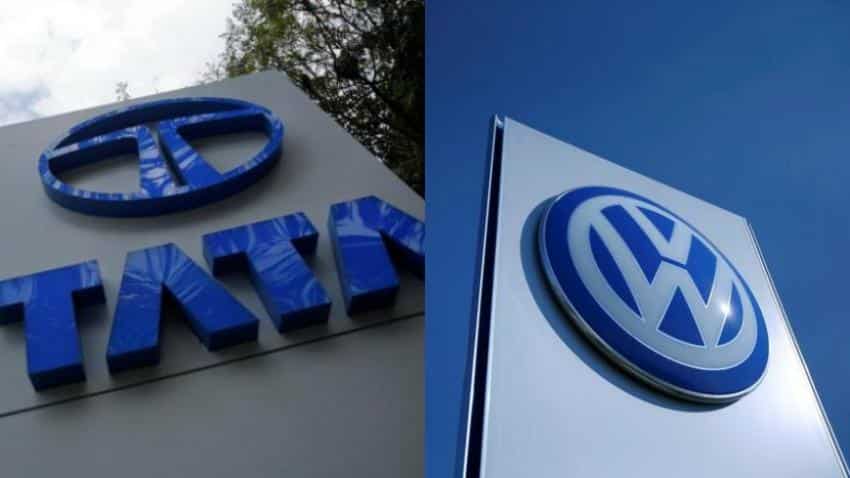 Tata Motors and Volkswagen Group on Friday signed a Memorandum of Understanding (MoU) aimed at establishing a joint development projects. The partnership between the two companies aims at a manufacturing collaboration which will give the scale in manufacturing and thereby enabling them to challenge the market leaders. Tata Motors is eyeing the number 3 spot in the automobile market by FY19.

Tata Motors has already already changed its strategy and consolidated from six vehicle platforms to two. “If you look at our volumes of 1,30,000 in FY16, with so many different products on six platforms, there is low economies of scale. There is no degree of commonality into these platforms and products — this is not how we can create a profitable and self-sustainable business model,” said Guenter Butschek, CEO & MD of Tata Motors in an Economic Times report.

This means that with the partnership there will be commonality between the products launched by these car manufactures in terms of either the engine, technologies or body type. This gives the economies of scale and enables to drive down the costs of production significantly.

The Tata Motors and Volkswagen Group partnership comes after Japanese automobile companies Toyota and Suzuki signed an MoU for a proposed business partnership. While the partnership is at a global level it is expected to be felt in India. The Indian arms of both the companies, ie Maruti Suzuki and Toyota Kirloskar Motors, are waiting for parent companies to figure out just what this partnership will bring.

Renault and Nissan have an alliance globally and now even Mitsubishi has joined the alliance. The two companies have shared manufacturing facilities in Chennai. They have been together since 1999.

Toyota and Mazda had also partnered in 2015 to share technologies and confront cost challenges. They have entered into a long term partnership that collaborates on products, manufacturing and technologies.

While partnerships are expected to bring about more efficiencies between companies, however many partnerships between automobile companies have not lasted for long.

Take for instance, Mahindra & Mahindra's partnership with Renault which was formed in 2005 did not last long and April 2010 the companies decided to end their joint venture. The JV had launched the Logan which struggled to sell and after the split between the two Mahindra renamed it to Verito. However, it has not managed to see a huge growth in sales of the car.

This was one among four partnerships of Mahindra which had failed. It had two joint ventures with US-based Navistar International Corp in 2005 and 2007 to make an entry into the heavy commercial vehicles segment. It was considered a formidable deal and gave Mahindra the technological knowledge and expertise to become a full-fledged automobile company. The joint ventures ended in 2010 when Mahindra decided to buy the stake of the US-based company.

“There are challenges in a joint venture; when there are two decision makers, there are different approaches to do business,” said Pawan Goenka, president, automotive and farm equipment sector, Mahindra & Mahindra, in a Business Standard report.

Even its partnership with Ford came to an end in 2005 after 10 years. The JV with Ford was to diversify in the passenger car segment and it launched the Ford Escort. Later on Ford ended taking the stake in the JV and car went with the company.

Even Tata Motors had a partnership with Fiat which ended in 2012. However, this was limited to only a sales and marketing partnership.

Globally, too there are examples of automobile joint ventures falling apart. US carmaker General Motors (GM) saw its partnership with Fiat Auto fall apart four year later as it was cash strapped.

Even Suzuki and Volkswagen which were to be formidable alliance formed back in 2009 and just two years later Suzuki and VW were looking to exit their partnership. The partnership was done so that Volkswagen could get an access into the Indian market for small cars. The companies had agreed to cooperate on technology and expansion in emerging markets. Volkswagen later on argued that a deal between Suzuki and Fiat for diesel engines was breach of the contract.

One of the longest automobile partnerships in India between Hero MotorCorp and Honda Motorcycles and Scooters, popularly known as Hero Honda, ended after 26 years with both finally deciding to go their own separate ways.