Corporate taxes for mid and large companies should be brought down: Anil Gupta, KEI Industries 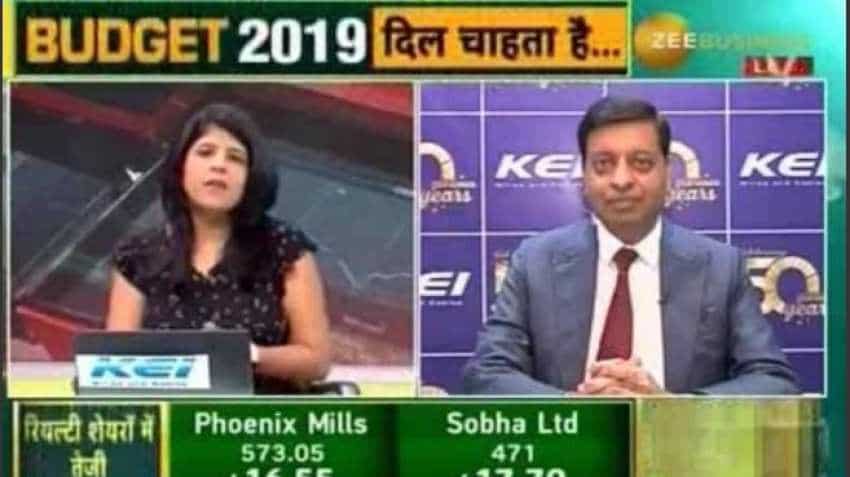 Anil Gupta said the investable surplus of the companies needs to be reduced so that they can invest more and produce more. Image source: Zee Business

Anil Gupta, Chairman & Managing Director, KEI Industries Limited, speaks about his expectations from the interim budget, contribution to electrification schemes like UDAY and SAUBHAGYA and export-related expectations from the government during an interview with Swati Khandelwal, Zee Business. Edited Excerpts:

Q: Your expectation from the interim budget that will be announced in February 2019?
A: I don’t know whether it can be fulfilled by the government or not, but corporate taxes should be brought down. In fact, the finance minister Arun Jaitley in his first annual budget mentioned that the corporate taxes, for mid and large companies, will be brought down by the fifth year. Our corporate taxes are the highest one in the world. So, the investable surplus of the companies needs to be reduced so that they can invest more and produce more.

The second thing is related to the GST returns against exports, we are an exporting company as well, should be made simpler and speedier as blocks huge amount.

The third thing is related to exports and I feel that interest subvention should be considered so that we have a competitive edge with other countries where the interest rates are quite low.
The fourth thing is that more expenditure on the developmental side of the economy, especially in the infrastructural side like rural electrification projects, urban electrification projects, railways and metros. As well as, other enablers, which improves the residential sector, commercial sector and industries. It will boost the overall demand structure of the economy and bring demand not only to our industry but the entire electrical industry and other industries, which are heaving production units in India.

And the last one, the creation of level playing field on the customs duty front. Many of the commodities in which the government has entered into a free trade agreement with ASEAN countries and many other countries, where preferential trades agreements are in place. So, there we have seen an inverted duty structure and we need to ensure that the commodities produced in the country must attract high customs duties so that the local industry is protected.
These are the demand that we expect from the government.

Q:  Do you expect more relief, beyond custom duty, for the domestic manufacturing sector so that it indirectly benefits your sector?
A: Main issue is demand creation, which can be created through infrastructure spending. We have talked a lot about investing in smart cities and urban smart projects. But, when seen on the ground than the investments are very low and this needs to be speeded.

Q: What is your contribution to UDAY & SAUBHAGYA schemes launched by the government? Also, tell us about the growth in infrastructure investment this year and its impact on your business?
A: Good investments have been made on UDAY scheme, SAUBHAGYA scheme and rural electrification projects. This investment has been positive for our company and I hope that such a momentum of electrification of the rural and semi-urban areas will continue.

Secondly, a number of projects of conversion of the overhead lines into underground cabling in urban and semi-urban areas are being undertaken by the state governments but the execution should be speeded. Speeding the conversion will just not bring work for the electrical industry but will also help in reducing ATNC losses and theft of electricity as well as improve overall efficiency of the Discoms, while reducing their losses. In addition, speeding the smart city projects will add to demand creation in this sector and our sectors as well.

Q: You were talking about electrification and there are scopes in rural and railway sector and you have an exposure to these segments too. What is your expectations in that space from the government, railway as well as finance ministry?
A: We are not expecting anything from the finance ministry as we don’t expect that the government will provide any tax incentives for such sectors. But want to say that the margins of the companies operating in the sector can improve if the there is a demand and work, which will generate employment as well as demand for companies that are into manufacturing of equipment and component for this kind of sectors.  I am talking of creation of demand that increases the productivity of the manufacturing company and the capacity utilisation as well.

Q: Export plays a major role in your business. Do you have some expectations like export-related incentives and cheaper loans among others?
A: I have said it earlier that we need some sort of interest subvention or interest subsidy on the export credit by the banks. I think, 3-4% interest subsidy can be given by the government on the export finance so that we get some level playing field with our peers from the other countries, who are operating at 3-4% rate of interest. Secondly, the easier availability of the export credit is the next aspect and it depends on the due diligence by the banks.

Q: Tell us about your expectations from the business in FY19? Also, provide an outlook on performance for FY20?
A: Our business outlook is good and is going in line to the projections, which was announced in our previous statements and I expect a better outlook in the coming months and next financial year. We hope to perform better than the expectations.