Can Mukesh Ambani's Reliance Jio force rural India to do what other telecom companies couldn't?

At its 40th AGM of Reliance Industries Ltd, Reliance Jio announced the launch of JioPhones which have smartphone-like features and are 'low-cost' feature phones. Zeebiz tells you about the market that this operator is eyeing. 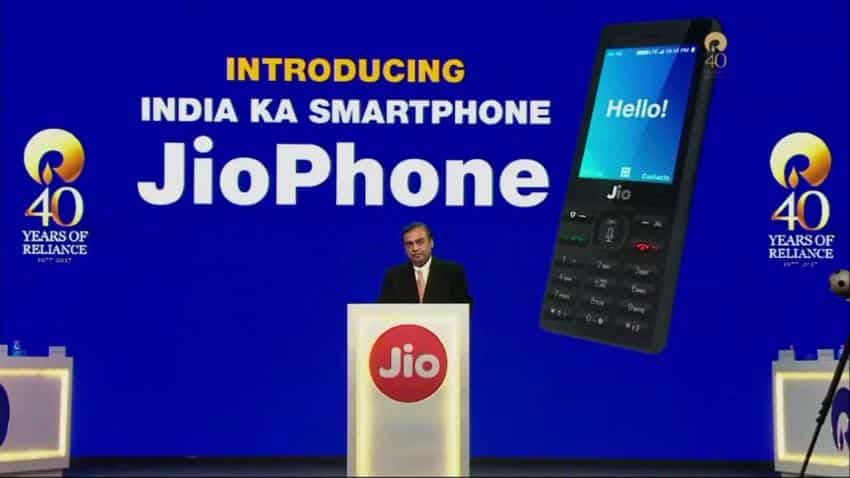 The primary reason for launching the ‘low-cost’ phone, Ambani said, was that majority of mobile phone users in India could not afford 4G enabled smartphones.

“There are 78 crore mobile phones in India. However, let us not forget that in this 78 crore, there are more than 50 crore feature phone users who have been left out of the digital revolution. They cannot avail any benefits of a smartphone, much less the benefits of a 4G LTE smartphone. They can neither afford the cheapest 4G LTE smartphone, nor the exorbitant cost of data charged by existing 2G operators,” Ambani said.

With these words, he launched the cheapest 4G enabled feature phone in India with his daughter Isha and son Akash taking the shareholders and the world through a detailed step-by-step guide of how the phone will work with its features rivaling any upmarket smartphone.

Rural tele-density, as per Telecom Regulatory Authority of India’s latest report, was at 50.41 crore; in comparison urban tele-density was at 67.66 crore.

At the heart of this presentation by Ambani was disruption. Therefore, it was apt for him to announce the price of the feature phone like Steve Jobs of Apple Inc did with his presentations.

“Most of the feature phone users come from rural part of India and there is a huge digital divide in terms of they can’t afford smartphones or they are not literate enough to use them. So they still prefer feature phones. Thus there is still a huge opportunity for feature phones,” Neil Shah, Research Director at Counterpoint Research told Zeebiz.

Ambani said that in order to check misuse, the company will collect Rs 1500 as deposit to be returned after three years. He further said that Reliance Jio aims to supply the market with 5 lakh of these feature phones each week from September this year.

With an aim to find new customers in Indians who cannot afford internet on their phones, Ambani may have devised a plan to make huge money in a very short span of time.

A bank of the envelope calculation shows that even if 10 crore of these targeted people pay Rs 1500 deposit for this feature phone, it will leave Reliance Jio with a cool Rs 15,000 crore in its bank account as security deposited locked-in for three years. Ambani is targeting the entire 50 crore feature phone market.

To do this, Ambani announced a new tariff plans of Rs 153 per month.

“Currently, the 50 crore feature phone users are charged Re 1.2 to 1.5 per min for basic voice calling. They end up spending their entire month's telecom budget of Rs 150 – 200 only to get 150 minutes of basic voice. With Jio's network coverage reaching 99% of India's population and by making voice calls free, this potentially empowers each and every Indian to make free voice calls to any operator anywhere in India,” Ambani said.

The rural customers of telcos do not spend much on their monthly recharges (nearly Rs 80), making the urban crowd attractive customers to cater to (GSM ARPU Rs 120). Ambani-backed Reliance Jioi is waking up to the untapped rural demand.

“The Rs70+/month spend segment would be around 35-45% of the 50-55 crore feature phone base, in our view. An incremental addressable market of 17.5-25 crore subs for Jio, in other words,” Rohit Chordia of Kotak Equities Research said in a report dated July 21.

The urgency in Reliance Jio to garner the rural market in India has been visible for quite some time now.

Jio launched its services in September last year and by December 2016 the share of rural subscribers on its network were abysmally low, amounting to just 5% of its total. Other telcos had nearly 50% of its subscribers stemming from rural areas.

However its rural base grew drastically to 24.05% by the end of March 2017. Jio said it had a total subscriber base of 12.5 crore at the RIL AGM on Friday. 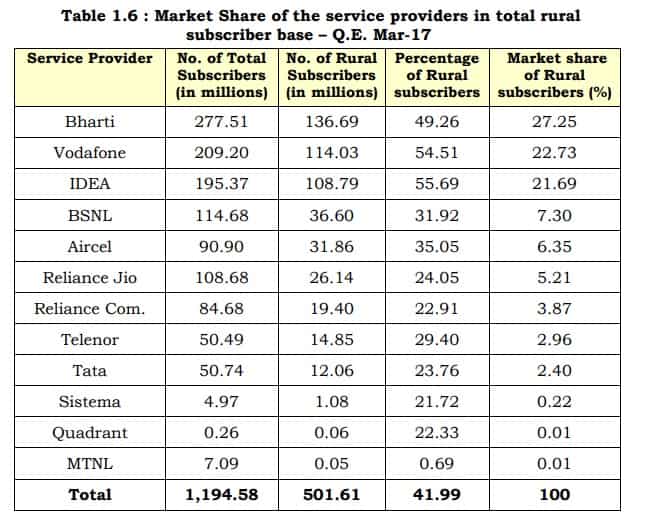 "We believe the launch of VoLTE device is a key positive for RJio as it expands its target market from current 30 crore smartphone users to overall 80 crore unique subscribers. This is likely to accelerate its subscriber growth," Motilal Oswal report said.

Jio’s target is to reach ‘99% coverage,’ as Ambani said, “In the next 12 months, Jio services will cover 99% of our country's population.”

“GSM subscriber ARPUs is in the range of Rs 115-120. GSM is a good representation of the overall ARPU as majority of subscribers use GSM,” Dixit added.

"Given the relatively low cost of the device which comes with 4G connectivity and access to apps, JioPhone has the potential to significantly increase rural tele-density. However, the price of the service at Rs. 153 per month is higher than the average rural ARPU and thus the acceptance of the phone remains to be seen," Vice President and Sector Head at ICRA, Harsh Jagnani said.

“Net average consumer level spending for the feature phone segment of the market would perhaps be in the Rs 65-70/month ballpark,” Kotak analysts said.

“Assuming the Rs 153 recharge is valid for 28 days, it would generate an ARPU of Rs141/month,” analysts from JM Financials said.

Speaking about Jio’s Rs 153 plan, Dixit said, “This will definitely give a push to rural ARPUs.”

He further explained, “If you see the current rural ARPU is in the range of Rs 88-90, then with this Rs 153 plan coming in and if majority of the people go with this plan because that will come along with the handset and everything. In all if you see it is going to help the rural ARPUs go up.”

In the broader scheme of things, Jio will be connecting subscribers to the internet for the first time where internet penetration is low.

“All these 50 crore feature phones in the market most of which are 2G subscribers of Airtel, Vodafone and others have not been able to access internet on their phones. What JioPhone does is it will connect these users to the internet for the first time,” Counterpoint’s Shah said.

“Rural areas have a good scope for internet penetration, because if you look at the internet usage data; urban compared to rural has a vast difference. Urban internet usage is nearly 68-70% in comparison rural is only 13%. Which is a very big gap that Jio can fulfil by offering 4G technology on its feature phones,” Care Rating’s Dixit said.

“Operators are struggling with their balance sheets which is one of the reasons they were not expanding to the rural areas and were consolidating themselves in the urban areas wherein the competition was quiet significant but now with Jio getting into the rural areas and significant off-take from there, the others should follow and will have to follow because the urban market is now saturated,” Dixit added.