Budget in India is becoming irrelevant as new initiatives are announced throughout the year: Sanjiv Bajaj, Bajaj Finserv

Sanjiv Bajaj, Managing Director, Bajaj Finserv Limited, during a candid talk with Zee Business, at the sidelines of 2019 World Economic Forum in Davos, spoke about opportunities of investment for India from the forum, his expectation from the upcoming budget and liquidity crisis. 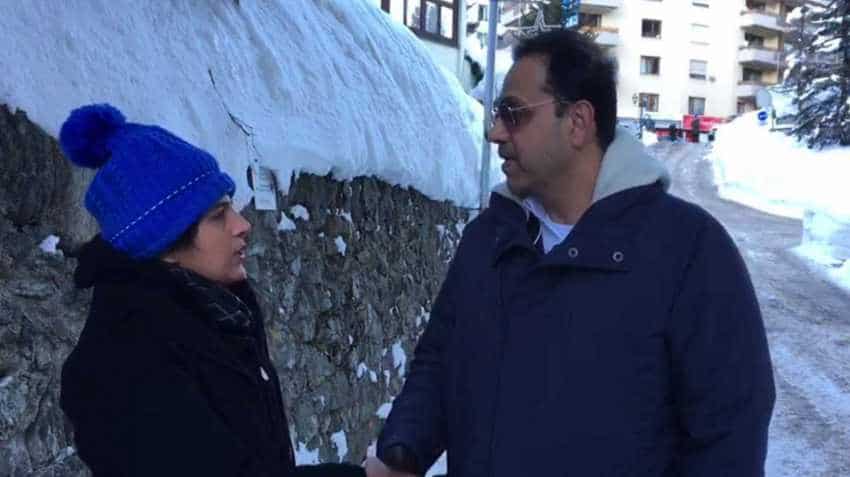 Sanjiv Bajaj said "Have a look at the global and Indian economy and you will find that we have gone through a volatile period in the last 5-8 years." Image source: Zee Business

Sanjiv Bajaj, Managing Director, Bajaj Finserv Limited, during a candid talk with Swati Khandelwal, Zee Business, at the sidelines of 2019 World Economic Forum in Davos, spoke about opportunities of investment for India from the forum, his expectation from the upcoming budget and liquidity crisis. Edited Excerpts:

Q: Do you feel that India can attract new business and fresh investment amid ongoing global volatility from this global forum at Davos?
A: India has been an attractive and promising destination for foreign investors and companies for the last 5-10 years. Large market opportunities have been opened, since the liberalisation of certain policies, is creating curiosity among new people with whom we are meeting and continued confidence and interest for others. But, we will have to find a way to get over certain mishaps, like 2G and infrastructure among other issues, that took place in the last 8-10 years. I am sure about the kind of investment that we should attract from overseas.

Q: Let us know about the budget wish list of India Inc?
A: After seeing the budgets of last few years, I feel that budget in India is becoming irrelevant, not for wrong reasons, as amid liberalisation the successive governments have pushed the growth agenda by announcing new initiatives across the year. So, the budget is not for announcing initiatives. It has turned up to be a non-event for example how often we wait for the British or the American budget. So, luckily those past days when big announcement was made only at the budget time, I think those are behind us.

Possibly it can have some populist measures as we are going to elections. So, I think the next budget of the new government is going to be important.

Q: RBI policy is also around the corner and it is expected that there will be a rate cut. Do you think that the rate should be slashed, if yes, then by what levels?
A: I am not an economist but somebody who is running businesses, but I think that there is an opportunity for at least 25-50bps rate cut.
Have a look at the global and Indian economy and you will find that we have gone through a volatile period in the last 5-8 years. I feel, under such a situation, the RBI and the businesses should be nimble and proactive to change and be ready to change the rates without waiting for the next four or eight quarters. Those days have gone. Hopefully, they may return later, and we can see it with a lot of foreign central banks also.

Q: I will like to talk about Bajaj Finserv and your sector, as NBFCs have gone through a tough time and there was a liquidity crisis. Do you think that there is any liquidity crisis till date?
A: I think, the crisis is behind us, but yes, the amount of liquidity that was available six months ago is not the same, but it is less. There was a situation in the last three-four years where ample liquidity supply was available in the market, which created a situation where things were not priced correctly. As, everybody was getting ample liquidity irrespective of the quality of the underline business, the risk of the underlines business, the experience in that NBFC or HFC. So, the existing situation has brought back the process, which is correct.

Q: It is a good thing and can be termed as a blessing in disguise as businesses have turned up to be serious.
A: It is not related to serious or non-serious. But for someone who starts a new business without any track record should have a price at which the money will be given to him. After, which, he should build a track record. You build a good track record the cost of the fund should come down. And, this is the difference which was not visible in the past 2-3 years, which I think that we will see now.

Q: Do you think that liquidity situation will be normal in future?
A: Liquidity situation is good, but interest rates can go down because most of the PSBs has been lending either through NBFCs or have been buying their assets. But given this liquidity situation that happened in September they all have taken a short-term step and taken their rates up and this must be normalised. Because eventually that money is getting onward getting lend to assemblies to individuals.

Q: How will you close this year (financial year 20180-19) and what are your targets for FY20?
A: Our medium term continues to be positive but will not provide any number on it as I never give forward numbers and we are especially in blackout season now.

Q: But you think that FY20 will be a better year than FY19?
A: Overall, I think it continues to be a volatile year and we will have to see things in general. I think a lot will depend on the kind of government that comes. If we get a good stable government than it will create a lot of confidence in the market.

Q: As an NBFC, what do you expect the governor to do to solve problems related to the segment, apart from interest rates?
A: It is not about problems but there is a whole list of issues. I think we need to modernise Indian banking system whether it is NBFC or a bank. You cannot have one or two types of banks you must have 10 types of banks.

If you see the top 10 NBFCs or HFCs than they have assets over Rs10,000 crore each, the largest is Rs100 thousand crores plus including Bajaj Finance. They need to be monitored separately, they need to be on a fast, stronger framework and foundation, which gives confidence to customers, depositors and investors. You cannot treat them in the same way as the remaining 7000 NBFCs. And, you must recognise these large NBFCs along with monitoring them but provide flexibility and benefits to them as it will create confidence in the market. Because they are playing a major role in the Indian economy whether it is to SMEs or the individuals.