In these cases Vijaya Bank and Dena Bank are swapping equity shares with BoB, but this comes as a loss for the two smaller banks' share price, as value will decline. 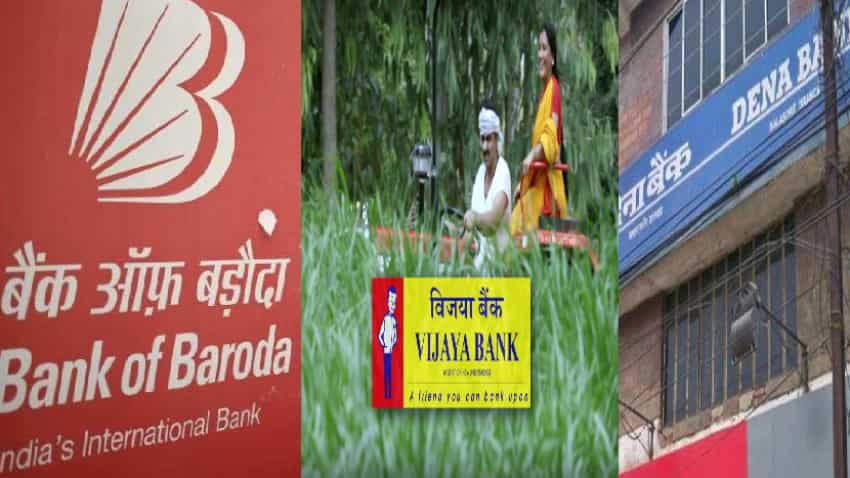 BoB being the largest lender, will merge Vijaya an anchor bank and the weaker Dena Bank with itself. Photo: Reuters/Youtube

A new course of action has been announced in the government’s mega public sector banks (PSBs) merger, where Bank of Baroda, Dena Bank and Vijaya Bank will enter into an equity swap taking their consolidation move ahead. Centre had announced a merger of these three banks, after nearly 2 years post State Bank of India (SBI) merger with associate banks. What is interesting between BoB-Vijaya-Dena merger is that these are three different banks with different portfolios. BoB being the largest lender, will merge Vijaya an anchor bank and the weaker Dena Bank with itself. Coming back to equity swap ratio decision, it seems like this is not a good news for state-owned Vijaya and Dena, however, BoB stands in a win-win situation. Thereby, today, on Dalal Street, investors took to panic selling sentiment on Dena and Vijaya.

Meantime, Dena Bank was in bloodbath as its shares plunged by nearly 20% in early opening after touching an intraday low of Rs 14.40 per piece. However, currently the bank is trading at Rs 14.60 per piece down by Rs 3.35 or 18.86% on BSE.

On the other hand, barely any movement was witnessed in Bank of Baroda share price, as it was trading at Rs 120.55 up by 0.96% on BSE.

What is noteworthy is that, Dena Bank should ideally, be in positive mode simply because a merger with 2 stable banks, BoB and Vijaya. holds great potential. Dena Bank is already trapped under RBI’s Prompt Corrective Action (PCA) framework, where it has no privilege to lend further, which is a key income of a bank.

So why did Vijaya and Dena Bank witness mass selling on exchanges?

A fair equity exchange share ratio was approved by BoB on Wednesday for amalgamation of Dena Bank and Vijaya Bank.

In these cases Vijaya Bank and Dena Bank are swapping equity shares with BoB, but this comes as a loss for the two smaller banks' share price, as value will decline.

Analysts at Elara Capital explains that, Vijaya Bank’s 1,000 equity shares value stands at Rs 51,050 against which its shareholders have been awarded Bank of Baroda’s equity shares worth Rs 47,939, translating into a loss of 6%.

Following which, Elara says, “we believe BOB would react positively while Dena Bank stock will witness a sharp fall and Vijaya Bank is expected to be largely neutral.”

Talking about the merger, Rakesh Kumar and Chintan Shah analysts at Elara Capital said, “We believe BOB plus Vijaya Bank adjusted for Dena Bank’s pains is eventually a gain for BOB’s shareholders. The merged entity’s loan book increases by 42% with largely unchanged net NPA and a slight fall in the coverage ratio, from 61.8% to 58.4%. And, the merged entity would undergo equity dilution of merely 29%.”

Details of equity exchange swap ratio will go ahead after February 07, 2019, as a  Grievance Redressal Committee headed by a retired judge of Mumbai High Court, has been set up to address the concerns of minority shareholders (Minority shareholders are those shareholders who either (a) individually or collectively hold at least 1% (one percent) of the total paid up equity capital of any of the 3 lenders - Bank of Baroda, Vijaya Bank or Dena Bank; or (b) are 100 (hundred) shareholders acting collectively, of any of Bank of Baroda, Vijaya Bank or Dena Bank).

Filing of written grievance will begin by minority shareholders from January 04 to January 24 - available for 21 days. Further, from January 25 to January 31 - the Grievance Redressal Committee will submit the report of recommendations to the banks board members. Later from February 01 to February 02, 2019, final decision will be taken by these bank’s board on the recommendations sent by grievance committee.

For now, investors have reacted on Dena Bank and Vijaya Bank over equity swap ratio decision in a negative bias.

BoB-Dena-Vijaya merger will give India its third-largest commercial bank with a total business size of Rs 15.4 trillion and loan book size of Rs 6.6 trillion and branch network of 9,511, as per Elara.

Post merger, the total number of shares for three PSBs come around 3,425 million while net worth of the combined entity stands at Rs 556 billion.

The trio added, “Our calculations show adjusted book value for the merged entity’s stands at ~INR 80 per share. Thereafter, considering the actual swap ratio and January 2’s closing price for BOB, the combined entity is at a valuation of 1.5x, which seems to be richly valued.”

Interestingly, analysts at Elara also took Dena Bank’s case as a lesson for all the weaker banks merger ahead.

Elara resumes saying, “we conclude banks with stronger balance sheet are likely to fetch better value for their businesses (in this case Vijaya Bank) while weaker franchises, which are struggling with stressed loans and provisioning burden, are likely to be bailed out at a discount.”

Firstly, BoB's equity swap with Dena Bank suggest bail out of the latter at a discount, considering it  does not stand in a position to bargain. Hence such can be scenario of highly weak banks especially under PCA framework for future mergers. Currently, Dena Bank would be the first under PCA framework to take ahead government's consolidation move.

Bank of Baroda and Indian Overseas Bank raise MCLR rates by up to 0.10%