Bandhan Bank IPO: Biggest ever bank issue launched; why you should buy into this Rs 4,473 crore offering 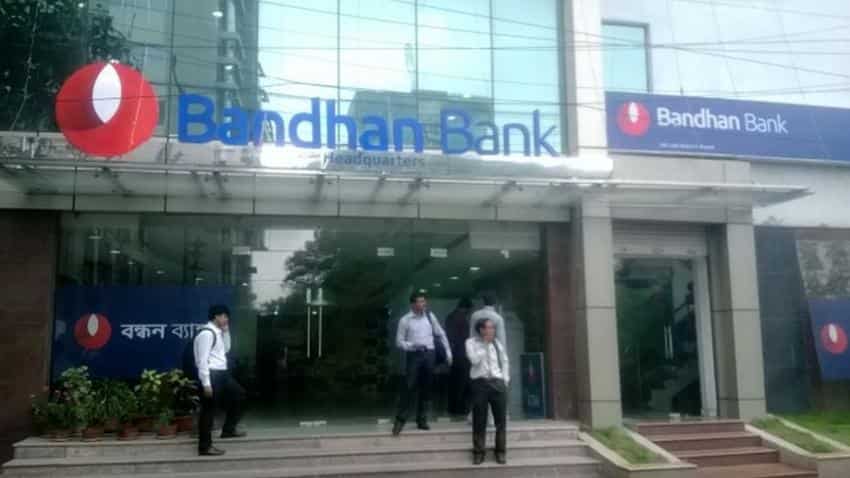 Bandhan Bank has just launched India's biggest ever initial public offering (IPO) by a bank to raise Rs 4,473 crore in a price band of Rs 370-375 per share. Although the Kolkata-based bank has been priced at a premium, analysts recommend subscribe and hold for the long-term. However, listing gains could be tepid, they added.  The public issue of Bandhan Bank consists of an offer for sale (OFS) of 2.16 crore shares (1.97 per cent of pre-issue stake) sold by the two shareholders – 1.41 crore shares (1.28 per cent of equity capital) by International Finance Corporation and 0.76 crore shares (1.28 per cent of equity capital) by IFC FIG Investment. The IPO also consists of a fresh issue of 9.77 crore shares. The amount thus received by the bank will be utilised mainly to augment the bank’s Tier-I capital base to meet the future capital requirements. The issue will close on March 19.

Here's what brokerages recommend on the Bandhan Bank IPO:

Bandhan Bank is an East/North-East focused Indian microfinance lender turned universal bank. The key challenges it would face in successfully scaling its franchise are: (i) maintaining asset quality given high reliance on risky microfinance loans; (ii) scaling the non-MFI loan book given concentration in East/North-East India, which have weak credit absorption; (iii) hiring and retaining top-quality talent given a seemingly inadequate incentive structure. Expected IPO valuation of 5.1 times post-IPO BV is at ~49% premium to peers (MFI/MFI-turned-SFBs) and implies a very long high growth trajectory that won’t be easy given the current product and geographical concentration of the bank.

At upper-end of the IPO price band, Bandhan Bank IPO is valued at 8.3 times Q3FY18 book value (pre-IPO) and on Post dilution basis at 5x of BV. Though valuations are on the higher side, we expect such premium valuations to persist given (a) healthy return ratio (25 per cent+ RoE for FY17 and 9MFY18), (b) balance sheet strength (24.8% CAR ratio, CASA - 33.2 per cent) and (c) experienced and focused management. Considering the above positives, we recommend 'subscribe' on the issue.

At the higher end of the price band, Bandhan Bank IPO is valued at 4.9x FY18E post diluted Adj. book value (based on 9MFY18 annualized PAT). We believe the valuation is justified given its niche play in micro financing, along with its robust earnings growth, strong return ratios, controlled costs and healthy asset quality. Investors can SUBSCRIBE to the issue from long term prespective. The near-term upside however may be limited due to the high valuation and current market conditions.

At the higher end of the price band of Rs 375, the issue is priced at 10.2 times its FY17 adjusted book value (ABV) and 8.6 times its 9MFY18 ABV. At this valuation, while the issue seems richly priced, the bank has a unique business model which cannot be directly compared to any other bank or NBFC in India. Considering the healthy financials – NIM of 9.9 per cent, gross and net NPA of 1.67 per cent and 0.8 per cent, respectively and high return ratios of 25.6 per cent RoE and 4.1 per cent RoA, we believe the bank will be able to attract adequate investor interest.

Further, the bank is expected to benefit largely from financialisation of household investments especially in the rural and underbanked areas, vast branch network and presence in high growth segments of micro lending, retail and SME banking. Given the high valuations, investors can subscribe to the issue from a long term perspective. It must be noted that since the issue is being offered at expensive valuation, listing gains may be capped.

Strictly speaking, we believe Bandhan Bank doesn’t have any peer in India, due to its business model and focus on micro-lending. However, to help our readers to assess the comparative metrics, we have presented the following table comparing various private sector banks, NBFCs and MFIs (though not comparable) in India on key metrics. 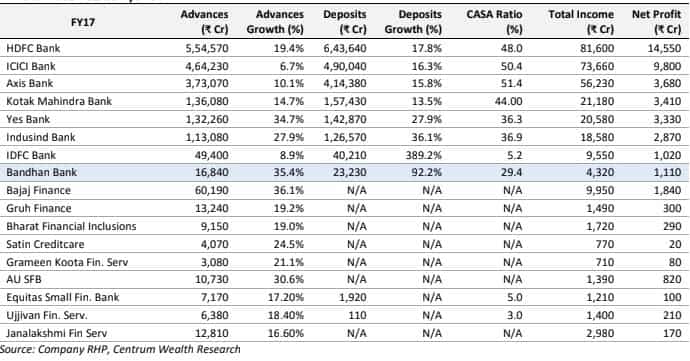