Dhaval Ajmera, Director, Ajmera Realty & Infra (I) Ltd., Karnataka government’s decision to slash stamp duty, Demand and pre-booking situation ahead of the festive season, project pipeline, the ticket size of the projects and geographies of launch, debt reduction plans and price hike among others. 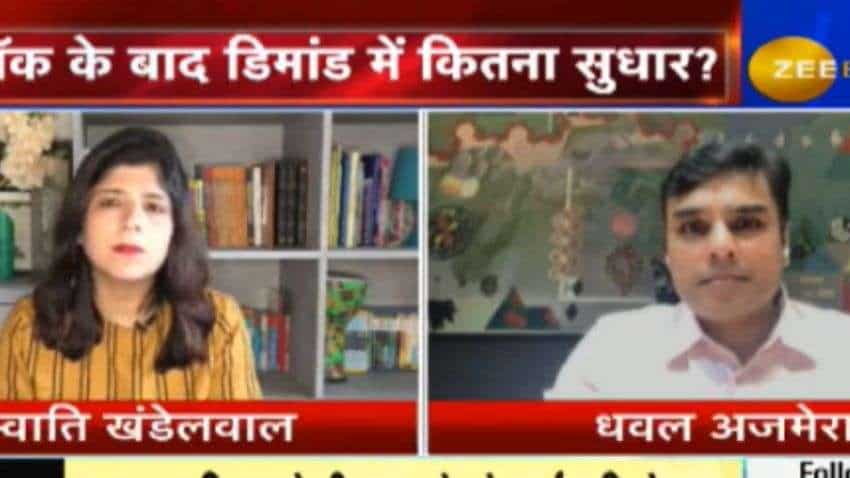 Dhaval Ajmera, Director, Ajmera Realty & Infra (I) Ltd., Karnataka government’s decision to slash stamp duty, Demand and pre-booking situation ahead of the festive season, project pipeline, the ticket size of the projects and geographies of launch, debt reduction plans and price hike among others during a candid chat with Swati Khandelwal, Zee Business. Edited Excerpts:

Q: The Karnataka government has slashed stamp duty from 5% to 3% on flats below Rs 45 lakhs. What are your views on this latest announcement?

A: This decision of slashing the stamp duty for the flats below Rs 45 lakhs taken by the Karnataka government is a positive movement. If I will talk specifically about our company, then this sector and the price range will be beneficial mostly for our one-bedroom apartments and in one project for two-bedroom apartments. Basically, we have one flat where the flats are under Rs 45 lakhs and we will be benefitted. The project is based in North Bangalore, namely ‘Ajmera Lugaano’.

Q: Ahead of the festive season, what kind of growth and sales you are anticipating? How the pre-bookings are visible and where you are getting a better response on your projects? Do you expect that the festival season will be better compared to the last year?

A: If we will talk area-to-area specific then as I was talking about the benefits that the Karnataka government has provided to a specific sector. But if you will have a look at the same stance of the Maharashtra government that was provided last year then the benefit was provided all across the sector and there was no limit for the same. This was something that gave a good push in sales. So, we wish that if the Karnataka government will open this sector-specific completely rather than restrictions then its benefit will be more sentimental. If we will talk about this year’s festive season in our projects, then definitely enquiries are there in almost every segment and maximum enquiries are in ready to move in apartments. Currently, our major revenue is coming from the Bombay project, namely, Ajmera i-Land at Wadala. We are getting a very positive response there. In our under-construction apartments in i-Land, we have a project Ajmera Greenfinity where we have seen 50% plus bookings. It was launched in January-end this year. In around 7-8 months, we have made bookings for more than 50% plus apartments there. So, overall, it seems that the momentum of the buying season is very positive, which will have a good impact on the under-construction of a good product and good brand. And, I think, the demand for the ready-to-move-in will be very good.

Q: Update us about your project pipeline and what kind of launch pipeline do you have in hand and what which projects will come on-stream over the next six to twelve months and in which are the geographies where you will focus on? Also, update us about the performance of the business that you have in London?

A: As far as project launch is concerned then at the start of the year, we launched three projects in January 2021 two in Bombay and one in Bangalore. They will make a contribution of around Rs 500 crore to our topline. We have seen quite a positive response towards those including the project that was launched in Bangalore and I have earlier informed that 50% plus project has been sold in Bombay. We also did a project for commercial offices and we have made bookings of around 30% of the same. Going forward, we will be launching four projects this year whose total area will be 1.5 million square feet. We will get a topline of around Rs 2,000-2,500 crore in the next three to four years from these projects. Out of these four projects, two projects are based in Bombay and one each in Bangalore and Pune. So, this is our breakup and primarily the major revenue of Rs 2,200 crore will come from Bombay. As I said, we have a focus on these cities but this year’s launches are specific mainly to Bombay. When it comes to our London project, then there is demand for ready-to-move-in and sales happens mainly when the projects are ready. So, constantly, each of our projects in London is ready this year and we are making deliveries. Its revenues and completion have ended and we expect that it will have a positive sale. By this year and early next year, we should be completing all the sales in London projects.

Q: What is the ticket size of these projects and going forward will you focus on the same ticket size or you will also look towards affordable houses and what kind of projects will be important for you?

A: If you will have a look at the segment of our company, as I informed you in our projects in Bangalore is for 1 bedroom and stands around Rs 30-35 lakhs. If you will have a look at Bombay - the level of Bombay and definition for the affordable segment – then as I said that our Greenfinity project falls in the Rs 1 crore to 1.25 crore segment. The launches of this year, which are supposed to have in Bombay will primarily focus on mid-market and upper mid-market and its ticket sizes will be Rs 2 crore plus, which depends on the location and the project. In the future, we have plans to launch affordable projects in Bombay which will be available in the ticket size of Rs 70 lakhs to Rs 1 crore. For us, our focus is going to be on projects where we have landbanks and if I will talk about the mix then majorly, we will focus on mid-market and upper little upper mid-market but we will also launch three to four projects in affordable as well as in luxury. But primarily, 20-25% of our projects will be affordable and about 10% will be in luxury and the balance will be the mid-market.

Q: You have reduced your debt significantly. Going forward, what are your debt reduction plans? You are also bringing projects on-stream, so will it be funded through internal accruals or you will raise funds for the same? Also, can we see a price hike in the projects in the coming time, if yes, what is the quantum?

A: Last year, our debt level stood at around Rs 980 crore which has been reduced and brought down to Rs 700 crore in the last quarter. So, our debt-equity ratio earlier was around 1:4 has come down to 1:1. We have a target to reduce our debt significantly. But at the same time, as we will launch the projects than for the working capital of the project or funding, we have to submit the premiums to the government for loading the FSI and for that we need immediate funding and we are approaching the banks for funding and discussions are on with them. So, we will take funds for project-to-capital working capital and but our existing debt will be reduced simultaneously. But as the new projects will be launched then project-specific funding will go on. This is an ongoing cycle of any real-estate company and it will be there. But we will focus on doing it through internal accruals and sales. A certain part of all the projects that will be launched will be funded by banks but majorly will be done through internal accruals and sales. That is what our focus is so that our debt remains low as much as we can. Secondly, the increase in the raw material prices is a fact and if the prices continue to increase in the same trend, then definitely prices will go up but I think that as the projects will near its completion the pricing will continue to increase. So, we will look at a 10-15% hike in the life cycle of the projects.

House prices likely to increase by 5-6% in the next 45 days: Vishal Gupta, MD, Ashiana Housing

UP to get highest share of modernisation funds allocated to Railways