Chief Executive Elon Musk said Tesla Inc robotaxis with no human drivers would be available in some markets next year thanks to exponential improvements in technology. 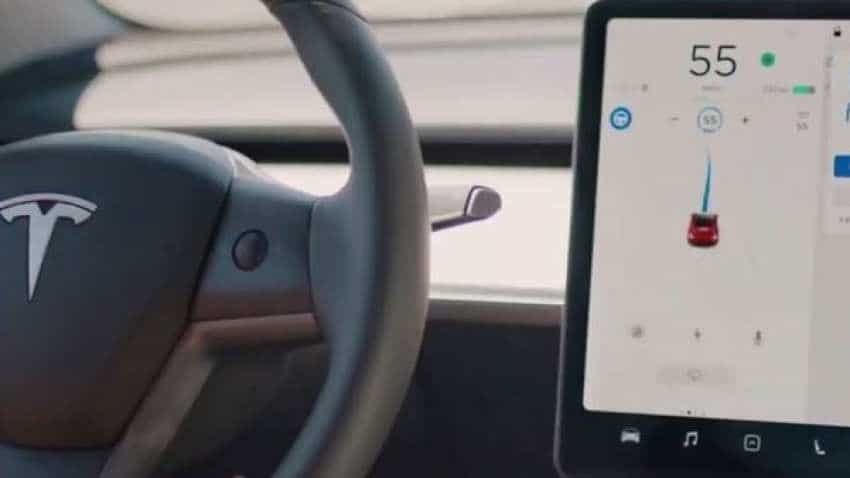 Elon Musk unveiled on Monday a microchip for self-driving vehicles that the electric car company hopes will give Tesla an edge over rivals. Image source: YouTube Tesla
Written By: Reuters
RELATED NEWS

Chief Executive Elon Musk said Tesla Inc robotaxis with no human drivers would be available in some markets next year thanks to exponential improvements in technology.  "Probably two years from now we`ll make a car with no steering wheels or pedals," he predicted, which acknowledging he often missed deadlines and his presentation on Monday started 30 minutes late.

Musk also unveiled on Monday a microchip for self-driving vehicles that the electric car company hopes will give Tesla an edge over rivals and persuade investors its massive investment in autonomous driving will pay off.  The presentation comes two days before Tesla is expected to announce a quarterly loss on fewer deliveries of its Model 3 sedan, which represents Tesla`s attempt to become a volume car maker.

Global carmakers, large technology companies and an array of startups are developing self-driving - including Alphabet Inc`s Waymo and Uber Technologies Inc - but experts say it will be years before the systems are ready for prime time. Musk touted a much faster time frame.

"The fundamental message consumers should be taking today: It`s financially insane to buy something other than a Tesla. It`s like buying a horse," saying Tesla was the only company to have a full self-driving suite of hardware.  All Teslas being produced today have the new chip and the company is about halfway through the design process for the next generation chip, which would be about three times better than the current system, Musk said.

Tesla has been working on a self-driving chip since 2016 and Musk had previously forecast that cars would be fully self-driving by 2018, a target Tesla has missed.  Investors appeared unmoved by the chip announcement but shares rose slightly in after-hour trading following the announcement of the robotaxis.

Musk took a swipe at competitors relying on Lidar, light-based sensors that are a key element in most other self-driving systems.  "Lidar is a fools` errand. And anyone relying on Lidar is doomed," said Musk, who has been vocal about the technology`s limitations. Tesla vehicles rely on cameras and radars as their vision system for self-driving.

Competitors will eventually "dump" Lidar, he said: "It`s expensive and unnecessary and once you solved vision it`s worthless."  More than $1 billion in corporate and private investment has been plowed into some 50 lidar startups over the past three years, including a record $420 million in 2018, according to a Reuters analysis of publicly available investment data in March.

SAFETY CONCERNS
Musk has been the centre of most Tesla presentations, but on Monday he ceded the spotlight to his top hardware and software executives. "A year from now we`ll have over a million cars with full self-driving, software, everything," he predicted. He said it was improbable but true that Tesla had designed the industry`s best self-driving chip, saying Tesla`s was dedicated for autonomous driving, while others, like Nvidia Corp, developed chips that could do other things as well.

Tesla`s chip was capable of seven times as many frames as Nvidia`s Xavier system, said Pete Bannon, Tesla`s head of Autopilot hardware.  Teslas have been involved in a handful of crashes, some of them fatal, involving the use of the company`s AutoPilot system, first launched in 2015. The system has automatic steering and cruise control but requires driver attention at the wheel. Tesla has been criticized by safety groups for being unclear about the need for "hands-on" driving.

The company also sells a "full self-driving option" for an additional $5,000, explained as "automatic driving from highway on-ramp to off-ramp," automatic lane changes, the ability to autopark and to summon a parked car. Coming later in 2019 is the ability to recognise traffic lights and stop signs, and perform automatic driving on city streets, Tesla says.

But Tesla`s use of the term "full self-driving" still garners criticism, as the option is not yet "Level 4," or fully autonomous by industry standards, in which the car can handle all aspects of driving in most circumstances with no human intervention.

Make in India! Apple iPhone 12 manufacturing to start in India soon | Here's all you need to know