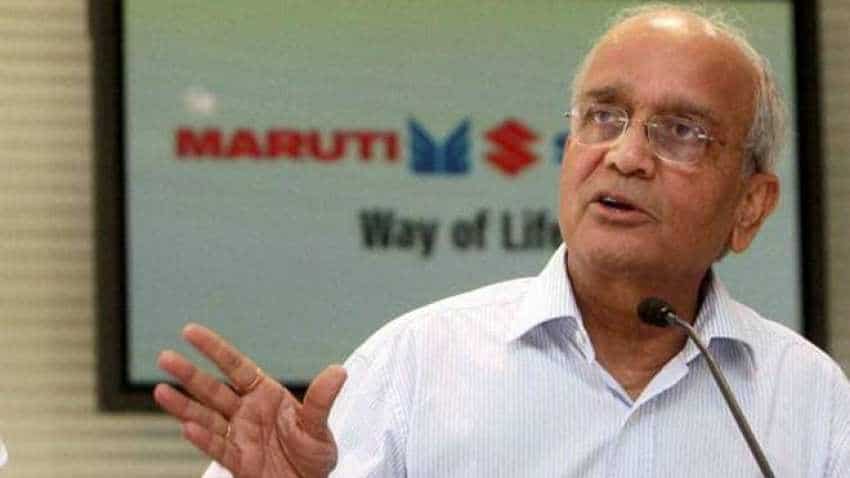 Bhargava stated that with 85-87 per cent car parc in India between now and 2030 set to be non electric cars, it is important to look at the problem in a holistic manner. Image source: PTI
Written By: PTI
RELATED NEWS

Imposing cess on conventional vehicles to promote electric cars will not serve the purpose as only the rich would end up receiving subsidies, Maruti Suzuki Chairman R C Bhargava said Wednesday.
Insisting that only cars should not be levied cess to promote electric vehicles (EVs), he also said two-wheelers, which consume two-thirds of petrol in the country, must not be left out in the electrification drive as these are much easier to be charged at homes.

"The biggest problem in India is the large number of small cars. Around 70 per cent of these cars could not be parked at homes and thus cannot be charged. I don't think that small car electrification can happen on the basis of subsidies. We need technology for that," Bhargava told reporters here.

The chairman of the country's largest car maker was commenting on a report of a proposal to impose cess of Rs 500-Rs 25,000 on conventional vehicles to promote clean energy vehicles in the country.

Bhargava said all around the globe, including the US and Europe, electrification of cars has met with little success so far.

Bhargava stated that with 85-87 per cent car parc in India between now and 2030 set to be non electric cars, it is important to look at the problem in a holistic manner.

Parc refers to the total number of registered vehicles plying in the country. "By then (2030), if you like to reduce oil import and pollution, what are your options? Your options are CNG, hybrid and biofuels. All these three technologies are required," Bhargava said.

He said the better way to achieve target of having a lower fuel import bill and reduction in air pollution is by supporting CNG vehicles.

"If at all there is a cess on internal combustion vehicles, why not use this fund to build CNG infrastructure? It will happen quickly and give results quickly as well...Even with infrastructure shortage, sales of CNG cars have been going up," Bhargava noted.

Bhargava also sought a lower goods and services tax for a hybrid vehicle which is a "very eco-friendly technology". "EV is not the only technology. It is a means to an end and not an end in itself," he said urging policymakers to consider other technologies as well.

Commenting on the company's plans, he said Maruti Suzuki India is looking to introduce a strong hybrid technology in its petrol cars that would help increase fuel efficiency by as much as 30 per cent.

The company would get the technology as part of the Toyota-Suzuki collaboration. "By April 2020, when BS-VI emission norm is implemented, the cost of a diesel vehicle is expected to be around Rs 2.5 lakh more expensive than a petrol variant. Customers will then decide whether to go for diesel or petrol...Our production will have to be naturally adjusted with customer demand," he said.