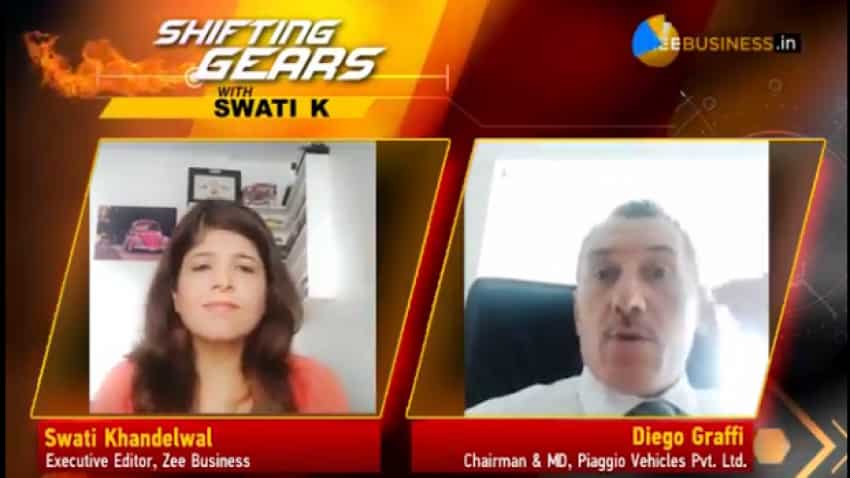 #ShiftingGearsWithSwatiK is a Zee Business exclusive series created to reveal the extent of COVID-19 impact on the world’s leading auto brands, their pivot strategies in the New Normal and much beyond that
Written By: Jitesh Kumar Jha
Edited By: Harish Dugh
RELATED NEWS

Diego Graffi, Chairman & MD, Piaggio Vehicles Pvt. Ltd., says we are the first Italian company to come to India more than two decades ago with three-wheelers during an exclusive interview with Swati Khandelwal, Zee Business. The interview was live on Zee Business Facebook page yesterday.

Talking about the Piaggio brand’s experience and acceptance by the Indian consumers for its products and how the Indian market is folding for company, Diego Graffi said, we were the first Italian companies to come to India more than two decades ago with three-wheelers. But being a Piaggio Group traditionally we hold its brands known outside India as a two-wheeler company and we entered in the market with the best of the brands in 2012 and with premium brands in 2016. That’s why I can say that so far since we entered the two-wheelers segment, India has been quite important for us as we know what the challenge is in this kind of markets is posing from the competitors. There is a lot of competition. I would also like to say that our business proposition is different from at least 90% of the other competitors in India in the segment.

Catch the exclusive interview of #ShiftingGearsWithSwatiK with Diego Graffi here

When asked do Piaggio sees an opportunity to look on the quadricycle segment and space, Diego Graffi said, in our current plan there is nothing like that as we first want to enforce, establish and be more robust in the existing segments and increase our penetration in the industry because we feel that there is huge growth potential. Let’s forget the last three-four months that has gone amid the overall situation due to the virus spread. Till January & February this year, we have seen the huge potential for growth as part of the penetration in the two-wheeler segments in the Indian space. So, our priority in India is now is to focus on the existing segments. However whenever in the future we see that there is a possibility to quadricycle then we will take a call at that particular time but that is not in our plan at this moment.

On the possibility of an electric model in the Vespa range, Diego Graffi said, that is a good question, and it makes logic to have a fleet as we have produced and sold it outside India in Europe from 2018. We are evaluating some possibility as of today, and Vespa has displayed one electric Vespa at the auto expo in February this year in Delhi. It was not by chance in the sense, we wanted to see the response that is coming from the Indian market. But the challenge before we want to enter this market we have to encourage with our brand proposition that we have built but at an affordable price. So, whenever we feel that we are in a position may be in the next couple of years we will enter the space could be on Vespa or could be Piaggio.

#ShiftingGearsWithSwatiK is a Zee Business exclusive series created to reveal the extent of COVID-19 impact on the world’s leading auto brands, their pivot strategies in the New Normal and much beyond that.