LIVE Coverage: Renault TRIBER Launch: It's a big day for Renault as the French multinational automobile manufacturer is unveiling its new offering TRIBER in a global reveal. 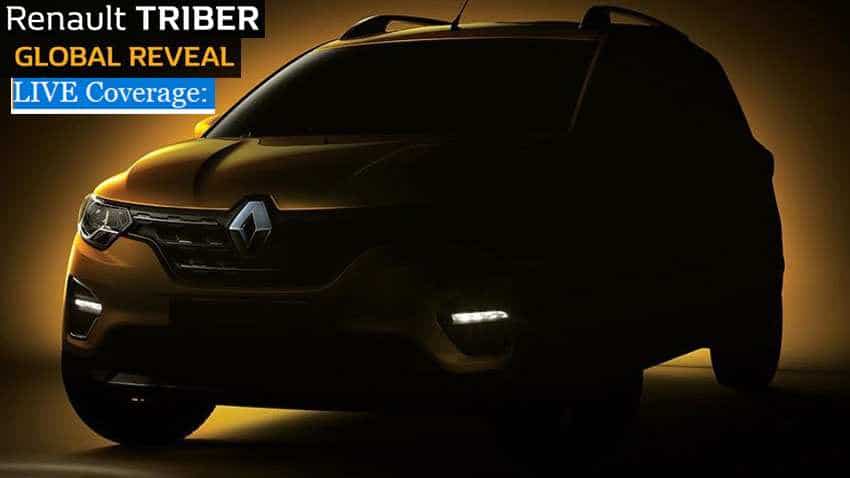 LIVE Coverage: Renault TRIBER Launch: It's a big day for Renault as the French multinational automobile manufacturer is unveiling its new offering TRIBER in a global reveal. The world premiere is taking place in New Delhi on Wednesday. A teaser too has been released to give a glimpse of how this upcoming car will look like. The teaser claims that Renault TRIBER is 'Super Spacious, Ultra Modular and India's First'. In the run-up to the Global Reveal and the unveiling of Renault TRIBER, the Renault India tweeted, "We're getting ready to reveal the #RenaultTRIBER – India’s first #SuperSpacious #UltraModular car." Here is how you can WATCH the LIVE COVERAGE and STREAMING of Renault TRIBER launch:-

Earlier, Renault had tweeted, "#RenaultTRIBER, the next game changer from Renault is ready for India."

Earlier, on the sidelines of VIVA Technology show held in Paris, Renault India Operations Country CEO & MD Venkatram Mamillapalle had said, "While we have showcased our intentions and actions towards future mobility on a global scale, we have a strong innovation story in India as well. This is reflected by the company's clear product strategy to cater to newer and growing segments of India's automotive market. The company's upcoming Renault Triber will be another testament to the company's focus on innovation.".

In April this year, Renault had launched its SUV - CAPTUR with enhanced safety features in compliance with the regulations stipulated by the Indian authorities. Renault CAPTUR is available with both petrol and diesel powertrain options. For the petrol option, it is powered by the 16 valves 4 cylinders 1.5L H4K petrol engine mated to a 5-speed  manual gearbox, producing 106 PS at 5,600 rpm and 142 Nm of torque at 4,000 rpm. The petrol powertrain delivers a mileage of 13.87 kmpl (ARAI certified). The diesel version is powered by the 1.5L K9K diesel engine (common rail injection), mated to a  6-speed manual gearbox, delivering a maximum power of 110 PS at 3,850 rpm and peak torque of 240 Nm at 1,750 rpm. The diesel powertrain delivers a mileage of 20.37 kmpl (ARAI certified). The prices of petrol variant start from Rs 9,49,999, while diesel prices start from Rs 10,49,999. All the variants fall in the range of Rs 9,49,999 to Rs 12,99,999.