Has Tesla got a new rival? Luxury carmakers BMW, JLR join hands for EVs - Should you buy Tata Motors share?

Both JLR and BMW are looking to enhance their presence in currently a very booming market in auto space's electric vehicle segment. 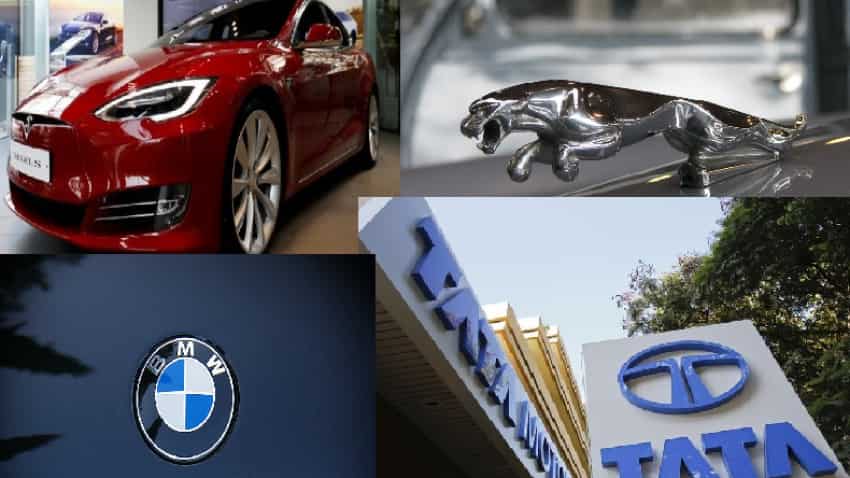 From being competitors in luxury car segment, to now becoming new partners who would have thought Tata Motors would choose a hand of business friendship for its Jaguar Land Rover (JLR) with BMW Group. Both JLR and BMW are looking to enhance their presence in currently a very booming market in auto space's electric vehicle segment.

Last week, Tata Motors confirmed that JLR and BMW Group has joined forces to develop next generation Electric Drive Units (EDUs) in a move that will support the advancement of electrification technologies, a central part of the automotive industry’s transition to an ACES (Autonomous, Connected, Electric, Shared) future. Currently, JLR has entered in this segment with its Jaguar I-Pace, while BMW has been stayed with BMW i3.

Nick Rogers, Jaguar Land Rover Engineering Director said, “We’ve proven we can build world beating electric cars but now we need to scale the technology to support the next generation of Jaguar and Land Rover products.”

A recent data compiled by CleanTechnica showed that Tesla’s Model 3 grabs 60% of US electric vehicle market. In Q1 2019,  Model 3 sales were some 24,003, while Tesla Model S and Tesla Model X were also in top 5 best selling electric cars following Chevy Bolt who took second spot having sold 4,316 vehicles. In the same quarter, BMW i3 was at sixth rank with sales of just 964 vehicles, while the newly launched Jaguar I-Pace was attracting sales and not far away having sold 608 cars.

What does analysts think about JLR - BMW collaboration?

Shashank Kanodia and Jaimin Desai analysts at ICICI Securities said, “We view this as a positive development amid high investment required in the ACES domain. It will limit the cash burn at JLR thereby resulting in controlled leverage, going forward. Both companies have one running EV model in the marketplace (BMW: I-3; JLR: I-Pace) and possess certain advance research capabilities to jointly invest in the ACES domain.”

“Sharing of costs (billions of dollars) is a more prudent way of investment in a technology (autonomous driving) that lacks a regulatory framework and possesses uncertain demand prospects. However, is widely acknowledged as the future of driving. Some global tie-ups/collaboration in a similar space include: FordVolkswagen; Honda-General Motors; Ford- Rivian among others,” said the duo.

Earlier, Morgan Stanley’s analyst Adam Jonas, scrapped Tesla Inc’s share price to  a jaw-dropping $10 from $97.  Jonas in a note to The Street said, “Our revised case assumes Tesla misses our current Chinese volume forecast by roughly half, to account for the highly volatile trade situation in the region, particularly around areas of technology, which we believe run a high and increasing risk of government/regulatory attention.”

Hence, it would be interesting to watch, what could JLR-BMW duo bring to the table while Tesla tries to escape its own shocks in the electric vehicle segment.

But Guess what! Tata Motors has become a hot stock for investors. Here’s how!

Joseph George  and Suraj Chheda, analysts at IIFL Securities said, “We attended JLR’s Analyst Meet in the UK. The demand environment in all markets (ex-China) is largely stable for JLR. New model pipeline is decent in 2019. Aggressive cash conservation/cost-cutting initiatives in JLR are expected to yield significant benefits in FY20 vs. FY19. However, China is still a work-in-progress; pending issues range from rebuilding the brand (especially Jaguar) to improving dealer profitability. With new models and cost-cutting initiatives, we believe FY20 volume/margins (2Q onwards) should be better than FY19.” The duo has given a buy rating on Tata Motors with a target price of Rs 225.

While, analysts at ICICI Securities said, “Going forward, as the base effect kicks in from June 2019, we expect its performance to normalise from here on amid conscious efforts to reduce cash costs, improve brand perception, control working capital cycle and capex outgo. However, we await positive commentary from JLR on volume as well as cash costs savings perspective before any meaningful change in our stance. However, the present collaboration mitigates risks over cash flow burn at JLR on upcoming technologies over a longer timeframe. We stick to our HOLD rating on the stock with a target price of Rs 185.”

Research Analysts Jinesh Gandhi and Deep A Shah at Motilal Oswal said, “Sustainable recovery in volumes in JLR, particularly in profitable markets of China and LR portfolio is the key to value accretive growth as well as stock performance. This is particularly important due to impending downcycle in cash cow CV business in FY21.” Adding they said, “The stock trades at 11.5x FY21 consol EPS, 3.1x EV/EBITDA and 0.8x P/BV (for ~7.6% RoE). Maintain Neutral with a target price of Rs 195.”

Earlier, Arya Sen, Equity Analysts at Jefferies while giving a buy target on Tata Motors of Rs 250, said, “Tata Motors hopes to continue market share gains/margin improvement in its domestic business, but acknowledged the challenges of a cyclical slowdown. Modular platforms are key to its product strategy in PVs & CVs, reducing investment and time to market. TTMT is on track for BS-6 shift by FY21E.”