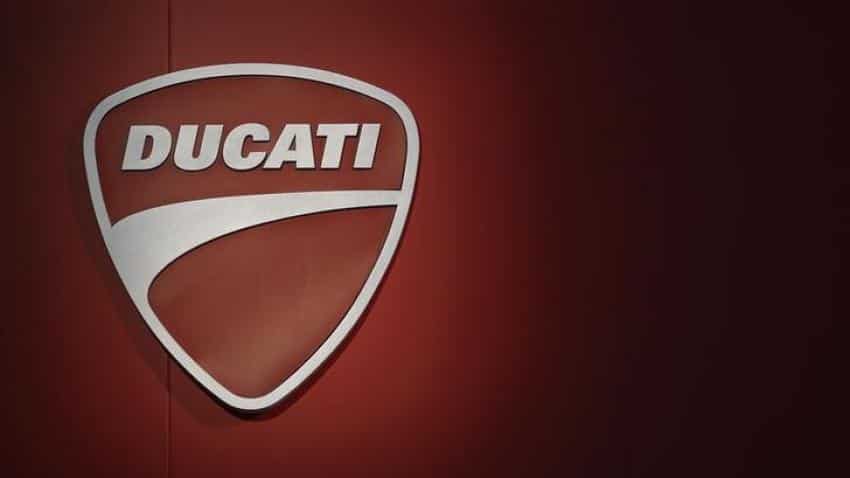 The logo of Ducati is seen during a Motor Day Exibition in Rome. Pic: Reuters
Written By: Reuters
RELATED NEWS

A deal with Harley-Davidson would bring together the maker of touring bikes like the Electra Glide that are symbolic of America with a leading European maker whose high-performance bikes have a distinguished racing heritage.

Milwaukee-based Harley-Davidson has hired Goldman Sachs to work on the deal, one source familiar with the matter said, adding tentative bids were expected in July.

Volkswagen, whose Audi division controls Ducati – maker of the iconic Monster motorbike – is working with investment boutique Evercore on the sale which will help it fund a strategic overhaul following its emissions scandal.

Based in the northern Italian city of Bologna, Ducati was on the wish list of private equity funds KKR

Ducati was launched in 1926 as a maker of vacuum tubes and radio components and its Bologna factory remained open in World War Two despite being the target of several bombings.

Ducati racers have won the Superbike world championship 14 times, with Carl Fogarty and Troy Bayliss its most successful riders.

Harley-Davidson, which commands about half the U.S. big-bike market, was founded in Milwaukee, Wisconsin at the start of the last century and was one of two major American motorcycle manufacturers to survive the great depression.

Volkswagen`s powerful labour unions, which control half the seats on the carmaker`s 20-strong supervisory board, repeated their opposition to selling the Italian motorcycle maker.

"Ducati is a jewel, the sale of which is not supported by the labour representatives on Volkswagen`s supervisory board," a spokesman for VW group`s works council said in an email.

"Harley-Davidson is miles behind Ducati in technology terms," he added.

Evercore has sent out information packages to a number of potential suitors including Ducati`s previous owner Investindustrial, sources with knowledge of the matter said.

Investindustrial bought a stake in Ducati before the financial crisis, subsequently taking control of the business before selling it to Audi in 2012.

It is now looking to compete with heavyweight private equity firms and large industry players to regain control.

Volkswagen, Europe`s largest carmaker, is seeking to move beyond an emissions-cheating scandal that has tarnished its image and left it facing billions of euros in fines and settlements.

A successful deal for Ducati, which last year reported revenues of 593 million euros, would show Volkswagen boss Matthias Mueller is serious about reversing his predecessor`s quest for size.

Volkswagen said last June it would review its portfolio of assets and brands, rekindling speculation among analysts that "non-core" businesses could be put up for sale.

Volkswagen hopes to raise between 1.4 billion and 1.5 billion euros from the sale of Ducati, valuing it at 14-15 times its earnings before interest, taxes, depreciation and amortisation (EBITDA) of about 100 million euros, the sources said.

The German car maker wants a valuation that reflects trading multiples of similar trophy assets in the automotive industry, such as Italian car maker Ferrari

Yet it may need to compromise on price as some of the bidders would struggle to pay as much as 1.5 billion euros for Ducati, several sources said.

Price expectations have already proved challenging for some industry players who recently decided against bidding.

A BMW spokesman confirmed the German firm was not interested in Ducati, while Hero and TVS were not immediately available for comment.

Another source close to Volkswagen said the sale of Ducati might not be finalised before the annual EICMA motorcycle show in Milan in mid-November as Volkswagen wanted to find the right buyer and the sales process might take time.