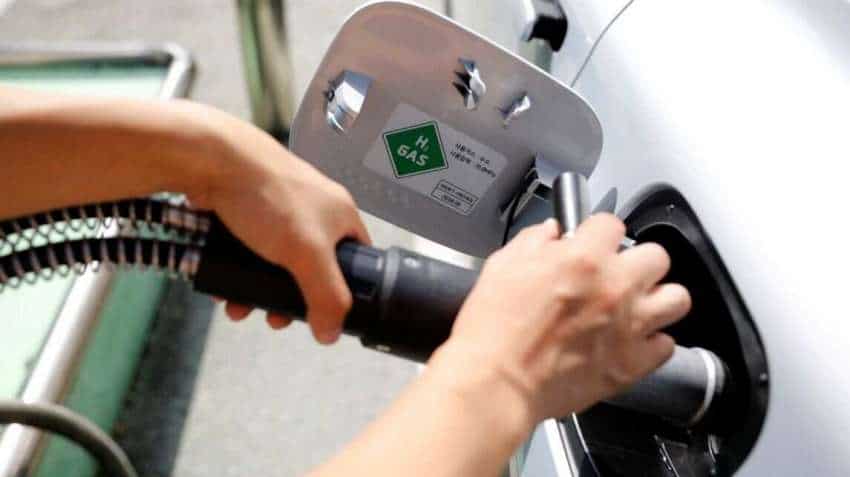 Newsom declared earlier this month he would step up the state`s already aggressive efforts to combat climate change amid a record wildfire season. Photo: Reuters
Written By: Reuters
RELATED NEWS

The move is the most significant yet by a U.S. state aimed at ending the use of fossil fuel-burning internal combustion engines, and clashes with the pro-fossil fuel policies of President Donald Trump`s White House.

Newsom declared earlier this month he would step up the state`s already aggressive efforts to combat climate change amid a record wildfire season.

"We are marking a new course," the Democratic governor told a news conference in Sacramento while standing in front of electric cars produced by automakers that support California`s efforts to reduce vehicle emissions.

Newsom signed his executive order on the hood of a prototype red electric Ford Mustang Mach-E.

The country`s most-populous state is committing to a "firm goal" to phase out the sale of new gasoline-powered vehicles by 2035 and was encouraging other states to take similar action, Newsom said. California has a broader goal of reducing greenhouse gas emissions by 80% from 1990 levels by 2050, but in recent years transportation-sector emissions have increased.

The California Air Resources Board (CARB) will turn Newsom`s goal into a legally binding requirement by writing regulations to mandate that 100% of in-state sales of new passenger cars and trucks are zero-emission by 2035. The board also plans to mandate by 2045 that all operations of medium- and heavy-duty vehicles be zero-emission where feasible.

California accounts for about 11% of all U.S. vehicle sales, and many states choose to adopt its green vehicle mandates.

Newsom characterized the move as an economic opportunity that would create jobs and boost U.S. auto manufacturers.

"If you are an American manufacturer, how can you compete globally unless you are in that business? Unless you are pushing the boundaries of innovation?" he said.

Trump has sought to bar California from requiring the sale of electric vehicles, while Democratic presidential rival Joe Biden has pledged to spend billions to speed their adoption.

'WON'T STAND FOR IT'

In a statement, White House spokesman Judd Deere called the move "alarming" and said it would destroy jobs and raise consumer costs. "President Trump won`t stand for it," he said.

The Republican president`s economic adviser, Larry Kudlow, said the measure was "very extreme" and he did not see others taking similar action. "I don`t think we should be taking any steps to get rid of fossil fuels, he told a White House briefing, "and by the way, there should be consumer choice for all automobiles."

Biden spokesman Matt Hill said electric vehicles could "create a million good-paying union jobs, dominate a fast-growing market worldwide, and meet the demands of the climate crisis." But he added that Biden "thinks of it in terms of incentives and investments, not bans."

California said it was joining 15 countries that have made similar pledges, including Britain.

California`s clean vehicle goals have not always come to pass and in some cases have been pushed back or reworked.

Newsom`s executive order sets a "goal" of no gasoline-powered passenger vehicles after 2035 and does not prevent Californians from owning gasoline-powered cars or selling them on the used car market.

Environmental groups praised the governor`s action on clean vehicles, but automakers were skeptical.

A group representing major automakers including General Motors Co, Toyota Motor Corp and Volkswagen AG said "neither mandates nor bans build successful markets." It noted that electrified vehicles accounted for less than 10% of new-vehicle sales in California, which is still the best in the United States.

Newsom also said he wanted the state legislature to ban new permits allowing use of hydraulic fracturing technology for oil and gas drilling by 2024. Environmental groups had hoped he would ban all new drilling permits in the state.

California and nearly two dozen other U.S. states have sued the Trump administration, which has rolled back Obama-era vehicle emissions standards and sought to undo California’s authority to set strict car pollution rules.

If the Trump administration order that seeks to bar California from requiring a rising number of electric vehicles is upheld, legal experts say it would prevent the 2035 mandate.

The administration has been waging a multi-pronged battle to counter California`s efforts to fight climate change by reducing emissions of greenhouse gasses from vehicles.