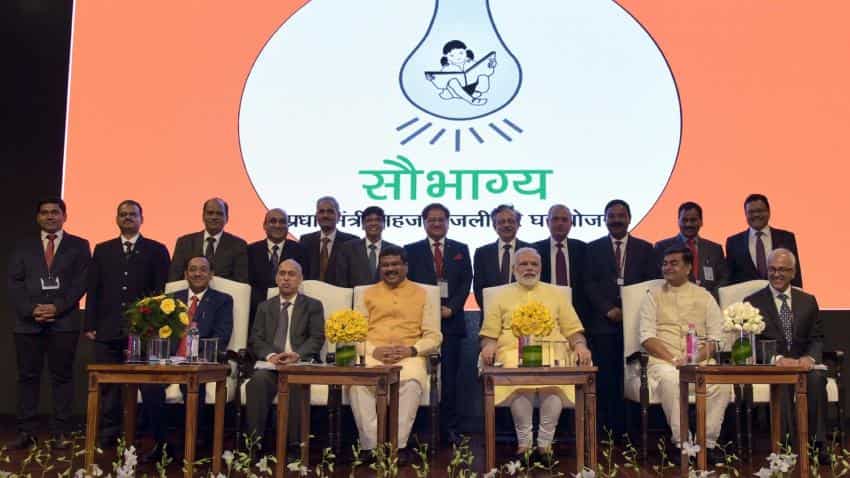 Prime Minister Narendra Modi with the Board of Directors of ONGC and ONGC Videsh Ltd at the launch of the Pradhan Mantri Saubhagya Yojana at Deendayal Urja Bhawan in New Delhi. Image Source: IANS
Written By: PTI
RELATED NEWS

"Prime Minister had given a call to cut country's oil imports by 10 per cent by 2022. Our roadmap for meeting that is ready," he said. "We intend to increase crude oil output by 4 million tonnes and raise gas production from current 60 million standard cubic meters per day to 110 mmscmd." The nation's biggest oil and gas producer has prepared the 'Roadmap for Import Reduction' two years after Modi set the target for reducing oil import dependence by 10 per cent, from 77 per cent in 2013-14.

"ONGC management is keen to ensure that the Prime Minister's vision of 10 per cent import reduction is met," he said, adding that the roadmap estimates oil and gas supplies from all past discoveries, ongoing development as well as potential projects slated for development.

As on October 1, 2016, ONGC had 577 hydrocarbon discoveries. Most of them were either in production or action had been initiated to monetise them.

The blueprint addresses monetisation plan of all the discoveries of ONGC, barring about 42 finds which are isolated /far from existing infrastructure, or have very low volumes or are located in difficult areas.

"Prevailing natural gas price may pose viability issue for some of the discoveries but we hope that movement towards free market pricing in coming years will aid their production," Shanker said.

ONGC currently gets USD 2.89 per million British thermal unit as the price for natural gas produced form most of its fields. This rate is half the imported price and 45 per cent of the USD 6.3 price that yet-to-be-developed gas finds in difficult areas like the deepsea command.

Most of the gas finds of ONGC are in shallow waters and do not command the difficult field rates.

According to the roadmap prepared, output from the currently producing fields is projected to fall from 18.5 MT in the current fiscal to 12.66 MT in 2021-22.

For natural gas, the output is projected to drop from 19.73 billion cubic meters from current fields to 11.9 bcm in 2021-22. The situation is rescued by fields that are under development or conceptualisation that will give 29.65 bcm in 2021-22.