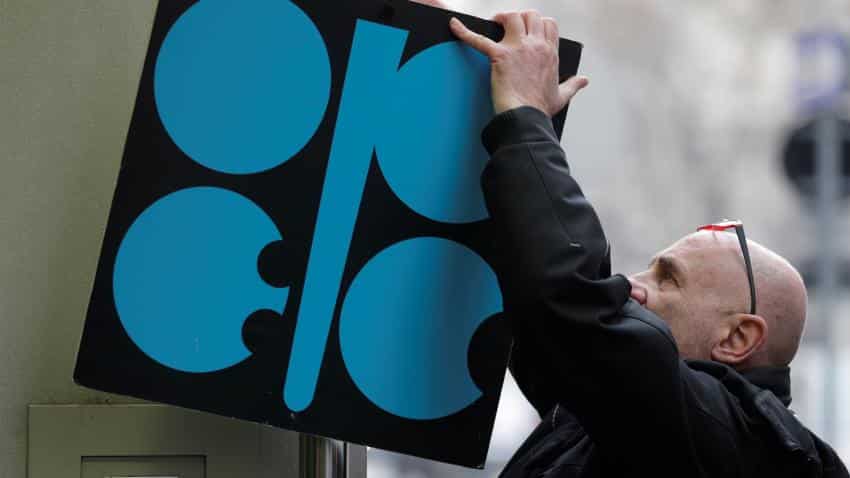 A man fixes a sign with OPEC's logo next to its headquarter's entrance before a meeting of OPEC oil ministers in Vienna. Image Source: Reuters
RELATED NEWS

Oil prices dipped on Wednesday in a volatile session buffeted by conflicting statements from oil ministers a day ahead of OPEC`s meeting in Vienna, as members debate the path for an extension of the group`s supply-cut agreement.

Oil has retreated in the last three days on concerns that the Organization of Petroleum Exporting Countries, and key non-members like Russia indicated on Wednesday that the deal will be extended, but it may be reviewed in June if the market starts to overheat.

The oil market has pulled back in recent days on concerns that OPEC might consider only a short-term extension to its current deal cutting supply by 1.8 million barrels per day (bpd) till March.

That uncertainty carried through to Wednesday, which some analysts attributed to the market`s generally positive tone in recent weeks in anticipation of an extension to the supply-cut deal.

"The output cut agreement might be largely priced in by now and once they announce it, the market is going to be looking to what`s next," said Gene McGillian, manager of market research at Tradition Energy in Stamford, Connecticut.

The market was less affected by a larger-than-expected 3.4 million-barrel drawdown in U.S. crude inventories, although gasoline and distillate stocks rising more than anticipated weighed.

Crude futures hit a session high after Kuwait`s Oil Minister Essam al-Marzouq said a key monitoring committee recommended extending the group`s supply-cut agreement through the end of 2018, but those sentiments were undercut by statements from Russia`s oil minister, who suggested the oil market still has yet to balance.

The cartel is still weighing the offsetting factor of rising U.S. production, and considering a clause that would allow the group to review a potential extension at its spring 2018 meeting in May or June. Reluctance to agree a lengthy extension has been driven mainly by Russia.

Moscow fears a strong price rally off the back of such a move could give an unsustainable boost to the rouble, one that harms Russian exports.

Some Russian producers have questioned the rationale of prolonging the cuts, saying it will lead to a loss of market share to U.S. producers.

U.S. production has been hitting records on a weekly basis in recent months, and for the week to Nov. 24, production rose to 9.68 million bpd. That is still short of the 10 million-plus bpd record set in the early 1970s, per monthly data from the U.S. Energy Information Administration.

"Even at $56 to $57 on (U.S. crude) there`s been a lot of hedging so we`re going to continue to see increased production from the U.S.," said Sandy Fielden, director of commodities research at Morningstar.

The drawdown in U.S. crude was driven by the shutdown of the Keystone pipeline, which cut inventories at the Cushing, Oklahoma oil hub by 2.9 million barrels, the largest weekly drawdown in eight years. The 590,000-bpd line was restarted on Tuesday.

U.S. gasoline and distillate stocks rose more than expected, however, in part due to weak implied gasoline demand, which fell to a five-year seasonal low in the most recent week.