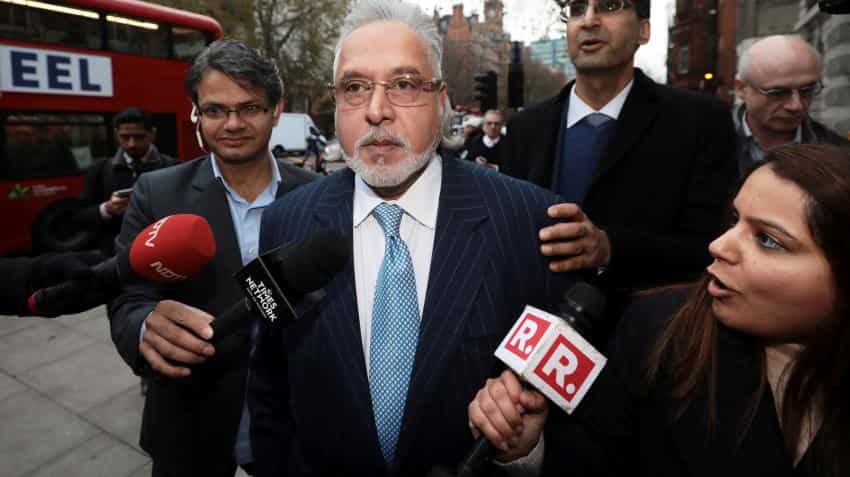 The extradition trial of Vijay Mallya, wanted in India on charges of Rs 9,000 crores fraud and money laundering, today began at a UK court here, with the prosecution asserting that the embattled liquor baron had a "case of fraud" to answer.

The trial, however, was briefly halted as the courtroom had to be evacuated due to a fire alarm. The 61-year-old tycoon and others waited outside the Westminster magistrates court during the fire drill.

The trial began with the Crown Prosecution Service (CPS), arguing on behalf of the Indian government, presenting its opening arguments in the case which focused on loans totalling around Rs 2,000 crores sought by the erstwhile Kingfisher Airlines from a consortium of Indian banks.

It concluded the opening day's proceedings by asserting that they had "shown by virtue of evidence a prima facie case" against Mallya and the hearing should now move to the next phase of whether there were any "bars to extradition".

The CPS detailed "three chapters of dishonesty" by the former Kingfisher Airlines boss the first being misrepresentations to various banks to acquire the loans, then how he misused the money and finally his conduct after the banks recalled the loans.

"Instead of acting as an honest person and doing what he could to meet his obligations, he sets about erecting lines of defence," said CPS barrister Mark Summers.

The Indian government says the reasons why a court can conclude, that these were loans that the "defendant (Mallya) never intended to repay" and that the company and airline industry were in "intensive care" and heading only in one direction, Summers said.

Instead of absorbing those losses, which would "impinge on his lifestyle", Mallya chose to palm it off to banks, in particular state-owned banks. Several internal emails, the government claims, disclose the reality of the position which was misrepresented to the banks, he said.

The judge noted that businessmen in this position would be "hopeful that things will turn around", but the CPS said this was not the case with Kingfisher Airlines.

It went on to add that loans acquired in the name of rescuing the struggling airline were in fact used to pay off other debts, including paying the rent on a corporate jet "owned by Kingfisher but operated for the defendant's (Mallya) own benefit".

The CPS presented an email written by Mallya in December 2009 justifying the use of loans to "achieve round robins", confirming that he was open to using money received from banks for Kingfisher Airlines to repay other banks to settle overdue bills and charges.

This was "expressly prohibited" as part of the agreed terms of the loans provided to the then struggling airline.

He also failed in his obligations as a "personal guarantor" of the loans by failing to use 40 million dollars received from Diageo from the sale of shares in United Spirits Limited to repay some of the debt.

"Instead of honouring his obligations, he squirrelled away the 40 million dollars in trusts for his children," Summers said.

Mallya claimed later that those personal guarantees were secured by the banks under duress, a move the CPS highlighted was not the actions of an honest person.

The judge responded with a chuckle by saying it was "quite inventive though".

The CPS admitted that there may have been "irregularities" in the internal processes of the banks sanctioning some of those loans but that would be a question to be dealt with at a later stage in India.

"The focus of our case will be on his (Mallya's) conduct and how he misled the bank and misused the proceeds," said CPS barrister Mark Summers. He then went on to lay out a detailed chronology of events, with specific focus on a loan sought by Kingfisher Airlines from IDBI bank in November 2009.

The loan sought amounted initially to Rs 950 crores but was later reduced to Rs 750 crores, after it had received Rs 200 crores from UCO bank.

Meanwhile, Mallya was also sanctioned a loan of Rs 150 crores from IDBI in advance of the larger loan sought from the state-owned bank to meet "critical obligations to overseas vendors".

The CPS gave details of how much of this money landed in Mallya's Formula One motor racing team Force India, something the defence has characterised as "legitimate advertising expenses" as the team's cars carried Kingfisher advertisements.

These pertained to the money laundering charges levelled against Mallya, which the CPS said was not a "desperately important issue" for the judge to decide on, with fraud remaining central to the case.

"There is clearly no money laundering case," Mallya said in response to this assertion by the CPS at the end of the hearing.

The CPS noted that in all the loans sought, "loss-making" Kingfisher Airlines had relied on nearly the same set of security pledges, which included the UB Group's reputation, Kingfisher's own "brand value", a promised infusion of equity funds and a projected return to profit by the airline by February 2011.

"The airline had claimed that it had put proactive measures in place to improve performance," the CPS noted.

However, it was also a time when according to an industry analysis, the state of the airline industry was described as "grim" and as being in "intensive care".

"It was not a scenario in which a state bank would have entertained such loan requests," the CPS added.

Court was told that loans acquired in the name of rescuing Kingfisher Airlines were in fact used to pay off other debts, including paying the rent on a corporate jet "owned by Kingfisher but operated for the defendant's (Mallya) own benefit".

The CPS presented an email written by Mallya in December 2009 justifying the use of loans to "achieve round robins", confirming that he was open to using money received from banks for Kingfisher Airlines to repay other banks to settle overdue bills and charges.

This was "expressly prohibited" as part of the agreed terms of the loans provided to the then struggling airline, it said.

The first day of the trial is expected to be taken up entirely by the CPS setting out the Indian government's prima facie case against Mallya, a fact that was not welcomed by his defence team.

Mallya's barrister, Clare Montgomery, told the judge that she had hoped to set out the defence's opening arguments on the first day as well.

But the CPS said it will "not be rushed" as it lays out the complete chronology of events.

Meanwhile, Mallya watched the proceedings from behind a glass-windowed dock.

His defence team tried to get the judge to allow him to sit outside the dock near his defence team to access some of the complicated paperwork being relied upon, but the judge denied that request saying all defendants are expected to sit in the dock.

However, the judge has directed that a table be provided to Mallya for easier access to his paperwork.

Earlier, Mallya looked relaxed when he entered the court to stand trial on charges of fraud and money laundering related to his erstwhile Kingfisher Airlines owing several Indian banks around Rs 9,000 crores.

"These (allegations against me) are false, fabricated and baseless," Mallya told reporters outside the court ahead of the hearing.

A four-member CBI and Enforcement Directorate (ED) team from India had also arrived at the court ahead of the trial, one of whom nodded when asked if they were "confident" about their case.

Mallya, who has been out on bail since Scotland Yard executed an extradition warrant in April this year, will be in the dock for the duration of the trial scheduled to end on December 14.

A judgement in the case, being presided over by Judge Emma Louise Arbuthnot, is unlikely until early next year.

The CPS will need to demonstrate a prima facie case by producing evidence to show that the criminal charges against Mallya are justified and that he should be extradited to face the Indian courts.

Prison conditions in India are expected to be at the forefront during the hearing, with the Indian government providing assurances of protection of Mallya's human rights.

The tycoon has been on self-imposed exile in the UK since he left India on March 2, 2016.

While on strict bail conditions, which include providing a bail bond worth 650,000 pounds, surrender of his passport and a ban on possessing any travel documents, the former Rajya Sabha member has been based at his Hertfordshire estate Ladywalk in the village of Tewin, nearly 50-km from London.

The CPS had presented "supplemental" charges of money laundering to previous charges of fraud against the businessman at an earlier hearing in October.

The judge had agreed to effectively re-open a fresh case so that all charges can be heard concurrently in court.

If the judge rules in favour of extradition at the end of the trial, the UK home secretary must order Mallya's extradition within two months.

However, the case can go through a series of appeals in higher UK courts before arriving at a conclusion.