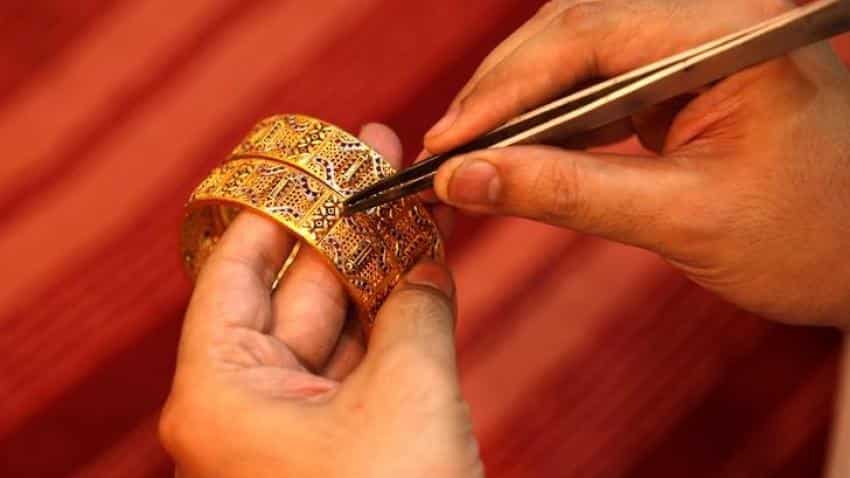 A jeweler places a stone on a gold bracelet at a jewelry workshop in Peshawar. Image Source: Reuters

Gold prices crept up early on Tuesday after falling more than 1 percent in the previous session, with U.S. President Donald Trump`s move to put North Korea back on a list of state sponsors of terrorism burnishing the metal`s safe-haven appeal. FUNDAMENTALS

Trump put North Korea back on a list of state sponsors of terrorism on Monday, a designation that allows the United States to impose more sanctions and risks inflaming tensions over Pyongyang`s nuclear weapons and missile programmes.

The dollar gave back some of its gains in Asian trading on Tuesday, but remained not far from a one-week high against a basket of currencies as German political uncertainty continued to pressure the euro. [USD/]

Federal Reserve Chair Janet Yellen said on Monday she would resign her seat on the Fed`s Board of Governors once Jerome Powell is confirmed and sworn in to replace her as head of the U.S. central bank.

Chancellor Angela Merkel said she would prefer a new election to ruling with a minority after talks on forming a three-way coalition failed overnight, but Germany`s president told parties they owed it to voters to try to form a government.

Russia`s VTB Capital, one of Russia`s biggest gold traders, aims to more than double sales of the precious metal to China next year, its global commodities chief said, after import curbs forced it to cut its target for this year.

Russia`s gold reserves stood at 57.9 million troy ounces as of the start of November, the central bank said on Monday.

U.S. Treasury yields rose on Monday as investors awaited minutes on Wednesday from the Fed`s last meeting, with no major economic releases due this week and trading expected to be subdued before the Thanksgiving holiday on Thursday.