Gold prices eased on Tuesday as investors sought safety in the dollar from a long-drawn U.S.-China trade war and its impact on the global economic growth. 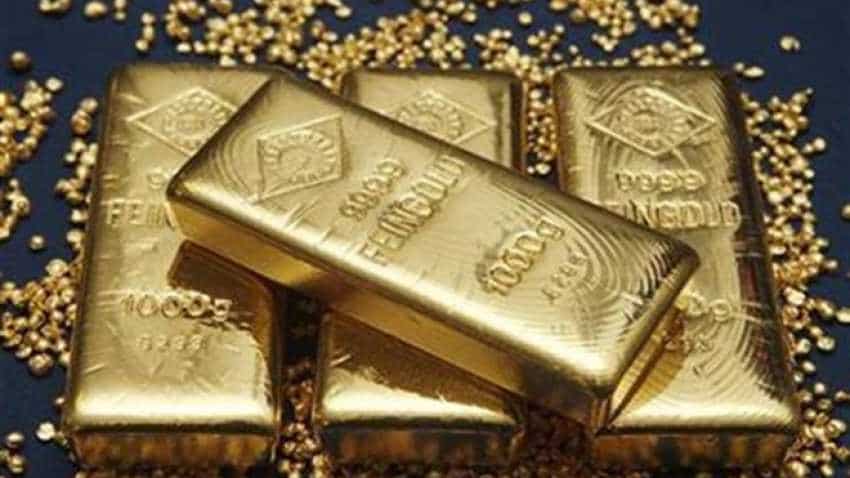 Gold prices eased on Tuesday as investors sought safety in the dollar from a long-drawn U.S.-China trade war and its impact on the global economic growth. Spot gold was down 0.2 percent at $1,306.51 per ounce, as of 0102 GMT, after falling 0.4 percent in the previous session.

U.S. gold futures fell 0.1 percent to $1,310.20 per ounce. Investors are now focussed on the new round of trade talks between China and the United States that started in Beijing on Monday. These talks come as the world`s two largest economies try to hammer out a deal before a March 1 deadline, after which U.S. tariffs on $200 billion worth of Chinese imports are scheduled to increase to 25 percent from 10 percent.

Sino-U.S. trade tensions have rattled financial markets since last year and also boosted the appeal of the U.S. dollar as a safe-haven. The dollar index was steady at 97.08, after advancing 0.4 percent in the previous session in its largest percentage gain since Jan. 24. [USD/]

A stronger greenback makes dollar-denominated gold more expensive for holders of other currencies. Meanwhile, top four Democratic and Republican congressional negotiators on border security funding resumed talks on Monday, with the possibility of another partial U.S. government shutdown looming if they fail to reach a deal by a Friday deadline.

The British parliament is set to hold a debate on Brexit on Feb. 14 where Prime Minister Theresa May is seeking changes to her deal with Brussels after it was rejected by a record majority in parliament last month. Italy`s ruling League party has drafted a law proposal which would eventually allow the government to sell the country`s gold reserves through a change to the constitution.

Russia`s central bank will pay less than an industry benchmark for gold that it buys on the domestic market, it said on Monday. Kazakhstan raised its gold holdings by 2.81 tonnes in January, according to International Monetary Fund data. China`s gold reserves were at 59.94 million fine troy ounce at end-January versus 59.56 million troy ounce at end-December, according to central bank data.

Venezuela`s most successful financial operations in recent years have not taken place on Wall Street, but in primitive gold-mining camps in the nation`s southern reaches. Russia`s largest gold producer, Polyus, on Monday reported a 20 percent jump in fourth-quarter adjusted net profit to $291 million compared with last year, lifted by increased production and rising sales of the metal.

If the adage "follow the money" is to be applied to commodities, then currently the place looking most attractive to investors is gold mining.