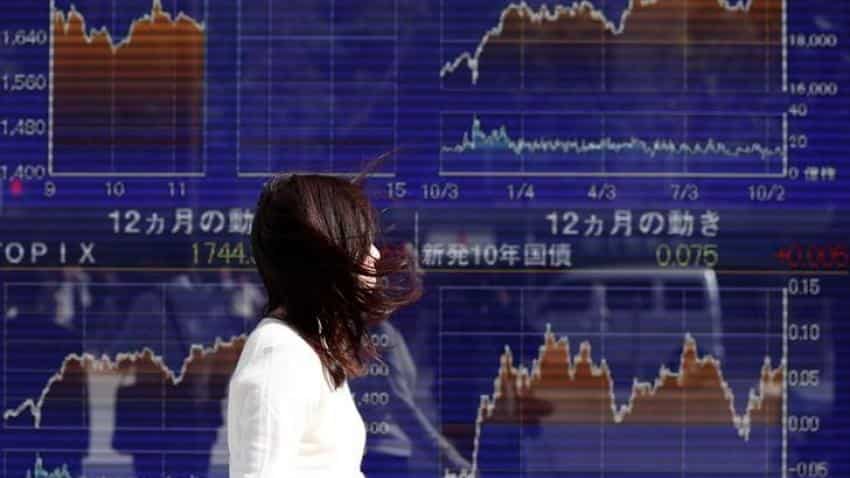 A woman walks past an electronic board showing the graphs of the recent movements of Japan''s Nikkei average in Tokyo. Image Source: Reuters

Asian stocks stepped back from a record high on Wednesday as the region`s resource shares were dented by falling oil and commodity prices while digital currencies tumbled on worries about tighter regulations.

MSCI`s broadest index of Asia-Pacific shares outside Japan <.MIAPJ0000PUS> dropped 0.1 percent from its record high as resource shares declined after oil and other commodities succumbed to profit-taking after recent gains.

Wall Street paused its rally, led by a 1.2 percent fall in energy stocks <.SPNY> as well as weakness in General Electric

Cboe volatility index <.VIX>, which measures investors` expectation on price swings in U.S. shares, rose to a one-month closing high of 11.66 from near record low levels seen earlier this month.

World shares have rallied since the start of this year on prospects of strong global growth and improving earnings in the U.S. and elsewhere.

Indeed, MSCI`s broadest gauge of the world`s stock markets <.MIWD00000PUS> rose 0.3 percent to another rocord high on Tuesday, extending its gain so far this month to 4.2 percent.

In the currency market the dollar was broadly weak, sticking near a three year low against a basket of currencies.

"As more countries in the world are starting to unwind their stimulus, the dollar`s yield advantage will shrink and prompt a correction in the dollar`s strength since 2014," said Minori Uchida, chief FX analyst at Bank of Tokyo Mitsubishi-UFJ.

Three sources close to the European Central Bank`s policy told Reuters that the ECB is unlikely to ditch a pledge to keep buying bonds at next week`s meeting as rate setters need more time to assess the outlook for the economy and the euro.

Although the report briefly pushed down the euro, the currency stayed near a three-year high as investors expect the ECB`s eventual exit from stimulus as a major market theme for this year.

The ECB last week signalled a growing appetite for revising its policy message in "early" 2018, and specifically a promise to continue its 2.55 trillion euro money-printing programme until inflation heads back to target

On the other hand, digital currencies tumbled, with bitcoin falling to a six-week low of $10,162 =btsp>

Bitcoin stood at $11,362, after a fall of 16.3 percent on Tuesday, its biggest daily decline in four months.

Oil prices pulled back from three-year highs as traders booked profits but healthy demand underpinned prices near $70 per barrel, a level not seen since the market slump in 2014.

Prices have been driven up by oil production curbs in OPEC nations and Russia, and demand amid healthy economic growth