President Xi Jinping kicked off the week-long event with a wide-ranging speech in which he said the market would be allowed to play a decisive role in allocating resources. 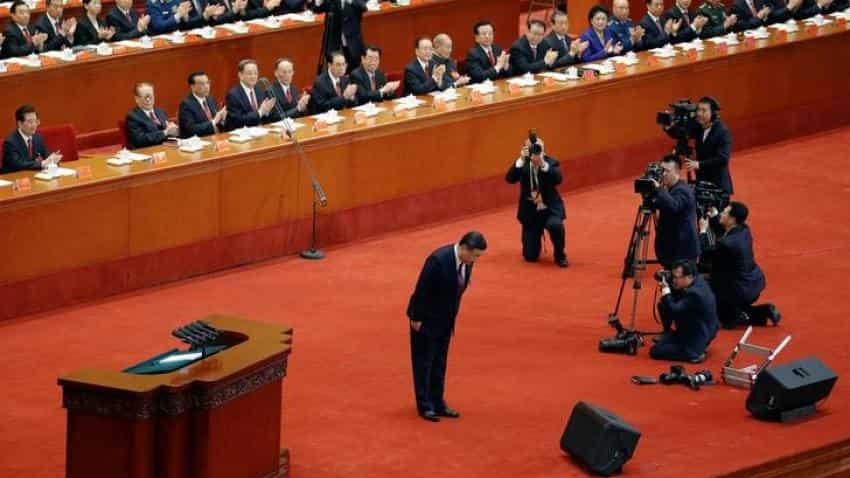 Chinese President Xi bows before delivering speech during the opening session of the 19th National Congress of the Communist Party of China at the Great Hall of the People in Beijing. Photo: Reuters
Written By: Reuters
RELATED NEWS

The twice-a-decade congress is expected to cement the power of President Xi Jinping, who kicked off the week-long event with a wide-ranging speech in which he said the market would be allowed to play a decisive role in allocating resources.

Investors are keen for any direction on economic and financial market reform over the next five years, though history suggests these events can be light on detail.

On Tuesday, the United States again declined to name China as a currency manipulator although it remained critical of the Chinese government`s economic policies ahead of a planned visit to Beijing by President Donald Trump.

Recent economic data from the Asian giant has been generally upbeat, fuelling a tide of optimism about global growth that has benefited shares across the region.

MSCI's broadest index of Asia-Pacific shares outside Japan edged up 0.1%, near their highest since late 2007, while Australia rose 0.2%.

Japan's Nikkei added 0.1% and was trying to string together a 12th straight session of gains.

An opinion poll by Kyodo showed Japanese Prime Minister Shinzo Abe's coalition was on track for a roughly two-thirds majority in Sunday's general election there.

The bullish mood on equities was evident in the latest fund manager survey from BofA Merrill Lynch.

Investors were bearish on bonds with 82% of those surveyed expecting yields to rise in the next 12 months and a record 85% believing bonds were overvalued.

Yields on two-year US Treasury paper have hit their highest since November 2008 amid speculation President Trump could chose a more hawkish leader to replace Federal Reserve Chair Janet Yellen.

Interest rates futures imply around a 90% probability of a Fed hike in December.

The shift upward in yields lifted the dollar to one-week top against a basket of currencies, and kept it steady on the yen at 112.17.

Dealers were wary ahead of speeches by several policymakers from the European Central Bank due later on Wednesday, which includes President Mario Draghi.

The biggest mover had been Mexico`s peso which boasted its biggest rise in over four months after trade ministers from the United States, Canada and Mexico extended the deadline on a contentious round of talks.

Shares in IBM jumped nearly 5% after hours as a shift to newer businesses such as cloud and security services helped it beat Wall Street`s quarterly revenue estimates.

In commodity markets, talk of higher US interest rates kept gold pinned at $1,288.10 an ounce.

Oil prices got a boost from a drop in US crude inventories and concerns that tensions in the Middle East could disrupt supplies. Brent crude futures firmed 43 cents to $58.30 per barrel, while US crude gained 26 cents to $52.14.