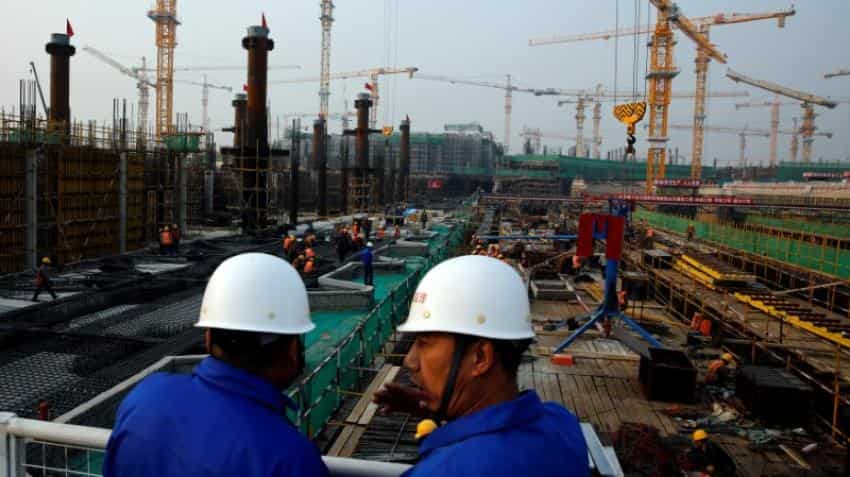 China is expected on Thursday to post a modest slowdown in third quarter economic growth from the previous quarter as the government`s efforts to rein in the property market and debt risks weigh on activity in the world`s second-largest economy.

The slowdown projected by analysts, however, is at odds with central bank governor Zhou Xiaochuan`s comment earlier this week that the economy could grow 7 percent in the second half of the year, versus 6.9 percent in the first six months, raising the prospect of an upside surprise in the official numbers.

Chinese policymakers are treading a fine line by taking steps to defuse property bubbles and contain risks from an explosive build-up of debt without stunting economic growth.

Although economists expect a cooling in third-quarter expansion, the projected growth is still within Beijing`s comfort zone, as President Xi Jinping is set to strengthen his grip on power at a Communist Party Congress that opened on Wednesday.

"While the good performance of the first two quarters in 2017 should carry further to the third quarter given strong fiscal and monetary tailwinds, there have already been some signs of deceleration, especially for exports, investment and the slowdown in real estate prices," Alicia Garcia-Herrero, Asia economist at Natixis, said in a note.

"Behind the strong economic numbers are worrisome problems like still mounting debt, a low return on assets and the continued pressure of capital outflows."

China`s property investment and construction are seen slowing as more cities try to curb surging housing prices, while a government campaign against riskier lending pushes up borrowing costs and a crackdown on pollution hurt some factories.

A better-than-expected GDP reading would likely lift stocks and global commodity prices and boost bullish sentiment on the yuan, which has gained about5 percent against the dollar so far this year.

Economists in the poll estimated GDP grew 1.7 percent quarter-on-quarter, unchanged from the second-quarter, though only 18 analysts gave sequential forecasts.

President Xi said at the opening of the party congress that China will deepen economic and financial reforms and further open its markets to foreign investors, amid widespread disappointment among foreign executives and analysts about the pace of reforms and market opening.

Few specific policy changes are expected from the Party Congress and analysts are looking to the annual Central Economic Work Conference, which is usually held in December, for signals on the 2018 growth target and policy initiatives. The central bank in late September cut the amount of cash that some banks must hold as reserves (RRR) for the first time since February 2016. The move, effective in January, offers an earnings boost to banks if they lend more to struggling smaller firms and the private sector.

The economy grew 6.9 percent in the second quarter - in line with the first quarter and defying expectations for a slowdown due to firmer exports and a resilient property sector as demand for homes spread to smaller cities. The economy is on track to hit the government`s full-year growth target of around 6.5 percent.

Economic activity showed visible signs of slowing in July and August, but some data for September pointed to a slight improvement, with imports and bank lending growing more than expected, while exports picked up.