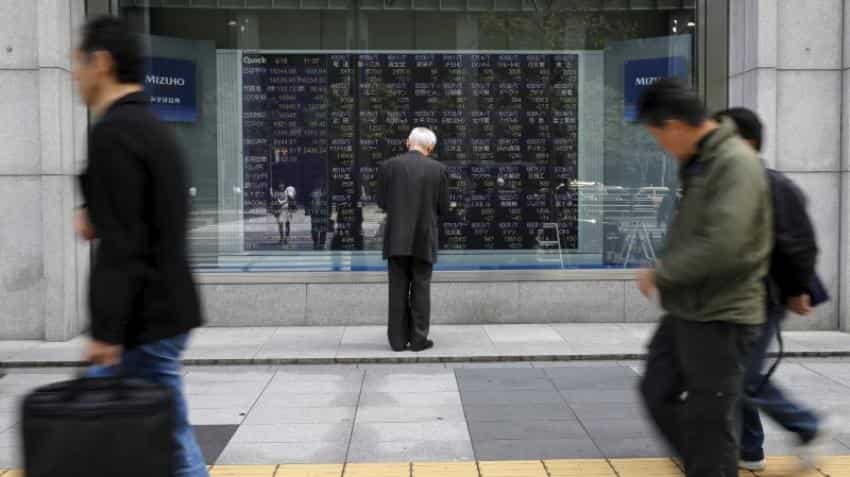 Man looks at a stock quotation board outside a brokerage in Tokyo. Image Source: Reuters
Written By: Reuters
RELATED NEWS

Asian shares were treading water in early trade on Wednesday as crude oil futures steadied after a selloff, while a widely expected interest rate hike from the Federal Reserve underpinned the dollar.

The dollar index, which tracks the greenback against a basket of six major rival currencies, edged down 0.1 percent to 94.048 <.DXY> but remained not far from three-week highs touched on Tuesday.

The Fed`s two-day policy meeting will conclude later on Wednesday. The U.S. central bank is seen raising its benchmark rate to between 1.25 and 1.50 percent, with investors also focusing on clues to the pace of tightening next year as inflation remains cool.

Those decisions may be influenced by news on Tuesday that U.S. wholesale inflation rose last month. Consumer price index (CPI) data will be released later in the global session on Wednesday.

"The election itself won`t have a direct impact on currencies, but a victory for Moore is seen as making it easier for the administration to pass legislation," including tax reform, said Mitsuo Imaizumi, Tokyo-based chief foreign-exchange strategist for Daiwa Securities.

"In the meantime, it`s hard to sell the dollar ahead of the Fed, although we might see `buy-the-rumour-sell-the-fact` after the actual announcement," as investors lock in their gains, Imaizumi said.

Crude oil futures steadied after facing profit-taking pressure when they surged to two-year highs in the previous session on an unplanned closure of the pipeline that carries the largest volume of North Sea crude oil.

RedmiBook laptop to LAUNCH in India TODAY: Check timings, how to watch LIVESTREAM, what to expect and MORE