MSME National Summit and Awards 2021: ‘Haryana is fully prepared for the third wave, and this time, the industry won't have to shut down’

Haryana Deputy CM and Industry & Commerce Minister Dushyant Chautala said that within the last one-and-a-half year, we have kept the focus on MSMEs. 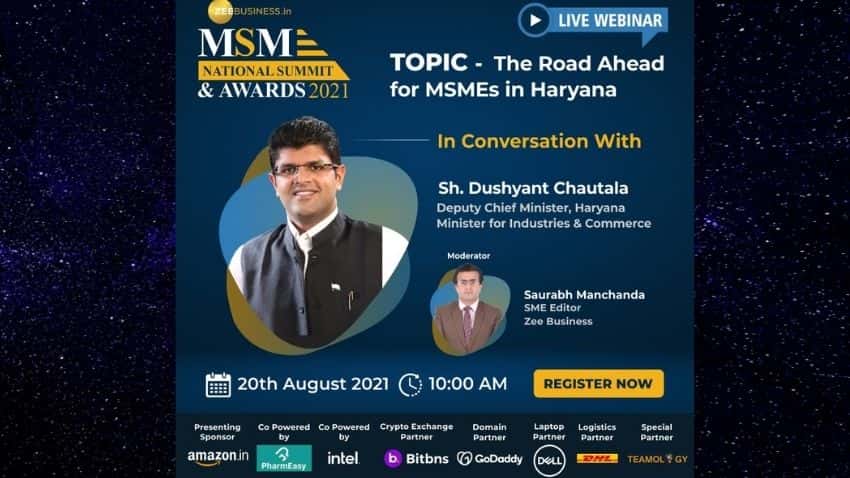 Haryana - adjoining to the national capital Delhi - is not only making big names in sports but also encouraging industries. For this, the state has identified sectors on the basis of geographical location, available resources and availability of raw materials. The focus sectors of the state include auto components, food processing, textiles, footwear and accessories, renewable energy as well as pharmaceuticals.

At the same time, micro, small and medium enterprises i.e. MSME have an important contribution to the economy of the state. This is the reason MSME accounts for 22 per cent of the gross state domestic product (GSDP).

How MSMEs are being supported in the state amid the effects of the COVID? What are the opportunities available to them? On all these aspects, we had a special conversation with Haryana's Deputy Chief Minister and Industry & Commerce Minister Dushyant Chautala at the MSME National Summit and Awards 2021. In this summit, we have also included industry suggestions from leading MSME centers of Haryana. The event was moderated by Saurabh Manchanda, SME Editor, Zee Business. The MSME NATIONAL SUMMIT and AWARDS 2021 presenting partner is Amazon, Co-powered by Pharmeasy and Intel, Crypto Exchange partner is BitBns, Domain partner is Godaddy, Laptop partner is Dell, Logistics partner is DHL, and Special partner is Teamology.

During the discussion, Haryana Deputy CM and Industry & Commerce Minister Dushyant Chautala said that within the last one-and-a-half year, we have kept the focus on MSMEs. He said that the MSME sector has an important role in providing employment today. Sharing the data, Chautala said that there is about 9.78 lakh registered MSMEs in the state. During the pandemic, the government had created the Haryana Udyam Memorandum Portal, on which about 2.75 lakh industries have registered.

Chautala also said that we are going one step ahead of the One District One Product Scheme and working on One Product – One Block. At the same time, the government will also soon launch a scheme named the Padma.

While discussing the issue of delayed payments of entrepreneurs, the Deputy CM said that facilitation centers have been set up at every district level. He also added that around 80 per cent of cases related to delay in payment have been resolved. Currently, the work is going on to resolve the remaining 20 per cent of the cases.

While discussing the concerns of the third wave of the COVID, Deputy CM Chautala said that the medical system in the state has been strengthened. Separate hospitals have been earmarked for children. He also said that if we continue to take precautions, then we will overcome the big challenges that come up in the coming times. “This is a big question whether the third wave will come or not,” Chautala said. But the state is fully prepared. And the industry won't have to shut down this time.

Speaking on the pharmaceutical hub during the programme, the Deputy CM focused on the new opportunities being faced by MSMEs. At the same time, giving his opinion on the important issue of job reservation, he said that the objective of bringing 75 per cent of job reservations in the private sector is that the skilled youth of the state will get timely employment.

So that the youth does not have to wander to other states for employment. He said that the new law will not have any impact on the investment or expansion plans of the companies. Along with this, Chautala took the government's view on the suggestions of the industry from Faridabad, Sonipat, Karnal and Manesar.