Priya Malik clinched gold at the World Cadet Championships on Sunday in Hungary. Malik defeated Kseniya Patapovich 5-0 in the summit clash and clinched the gold medal. She won in the women's 73 kg category. 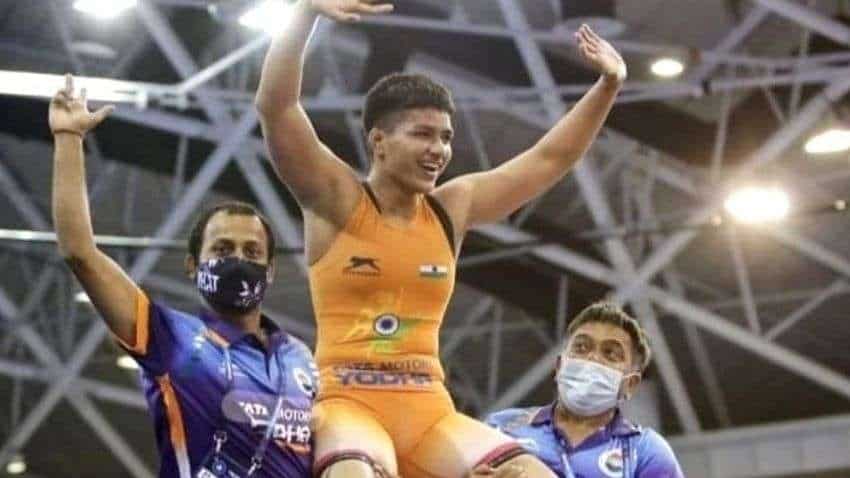 As per an ANI report, Malik defeated Kseniya Patapovich 5-0 in the summit clash and clinched the gold medal. She won in the women's 73 kg category.

The ANI report further states that Malik had also won gold medal in the 2019 edition of Khelo India in Pune. Then she went on to clinch gold at the 17th School Games in Delhi.

Following the triumph by Malik at the World Cadet Wrestling Championship in Hungary, Lok Sabha speaker Om Birla congratulated the wrestler and termed it another elating moment after Mirabai Chanu bagged a Silver medal in the Tokyo Olympics.

In a tweet from his official Twitter handle, Birla wrote, "in Budapest #WorldCadetWrestling daughter for winning gold medal in #PriyaMalik Many best wishes. After the success of Mirabai Chanu, this is yet another moment that has made us Indians ecstatic. It is our wish that we get the news of the golden success of the players in the coming days also."

Amidst this happiness of success of the Indian athletes in the field of sports. Model-actor Milind Soman got trolled on Sunday after tweeting a congratulatory message to Indian wrestler Priya Malik. Why? Because he assumed that Malik had won gold at the ongoing Tokyo Olympics.

According to an IANS report, Soman apologised in a separate tweet saying he should have checked before tweeting. On Sunday, Soman tweeted, "Thank you Priya Malik! #gold #TokyoOlympics #wrestling welcome to Mt Olympus."

Now, commenting on his post, netizens trolled him for sharing incorrect information and requested him to delete the tweet.
"Sir it's world wrestling championship and not Olympic... It is held in Hungary...fyi," wrote a user.

Replying to the tweets, Soman wrote, "I know now, still happy and I won't delete the tweet, sometimes its ok to make a mistake."

In a separate tweet, the model-actor expressed: "Sorry, should have checked before my earlier tweet, but was too overcome with joy. Priya Malik won Gold at the World wrestling Championships ! Onwards and upwards."