There is a sad news for the cricket fans as the fifth and the final test between India and England which was scheduled to start from today at 2.30 PM has been cancelled. 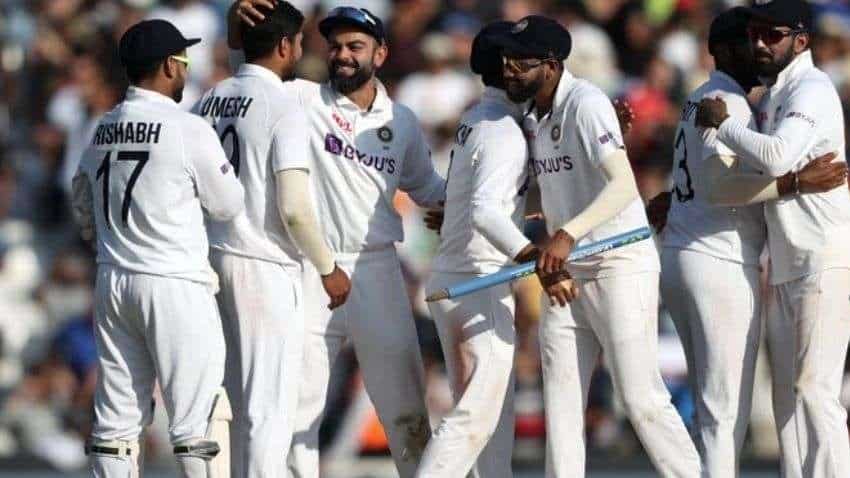 The fifth and the final test between India and England which was scheduled to start from today at 2.30 PM has been cancelled. Source: BCCI Twitter

Cricket 5th Test India vs England: There is a sad news for the cricket fans as the fifth and the final test between India and England which was scheduled to start from today at 2.30 PM has been cancelled.

According to a PTI report, India lead Test series against England 2-1, cancelled fifth and final match can be played later: BCCI source.

India's head coach Ravi Shastri was tested positive with COVID-19. An ANI report stated that before the start of the fourth day of the fourth test, the BCCI said that its medical team has isolated Ravi Shastri, Bharat Arun, Sridhar and physio Nitin Patel. This step was taken as a precautionary measure.

A PTI report informed that the players had been on the edge after assistant physio Yogesh Parmar tested positive for COVID-19.

The players tested negative but with the 96-hour incubation period also factored in, they didn't want to risk testing positive and ending in 10-day quarantine according to BCCI sources, PTI informed.

"Due to fears of a further increase in the number of COVID cases inside the camp, India are regrettably unable to field a team and will instead forfeit the match," the England and Wales Cricket Board said in a statement.

A COVID-related quarantine would have meant missing out on IPL matches, starting September 19.

"Following ongoing conversations with the BCCI, the ECB can confirm that the fifth LV= Insurance Test between England and India Men due to start today at Emirates Old Trafford, will be cancelled," the ECB stated.

"We send our sincere apologies to fans and partners for this news, which we know will cause immense disappointment and inconvenience to many," it added.

India vs England 3rd Test Day 3: England at 423-8! Can India make a COMEBACK? Check WHERE and WHEN to WATCH day 3 LIVE

India vs England 3rd test day 2 : India BOWLED out for 78, England 120/0 in first inning- Can India FIGHT BACK? Check WHERE and WHEN to WATCH LIVE action

India vs England 3rd test 2021 STARTS TODAY, see WHERE and WHEN to watch day 1 LIVE - Check VENUE, playing 11 and other details here

India vs England Second Test Day 5 Livestreaming: Can India WIN from here? Check WHERE and WHEN to watch 2nd Test Day 5 LIVE'; check SCORES, RESULTS and other DETAILS here