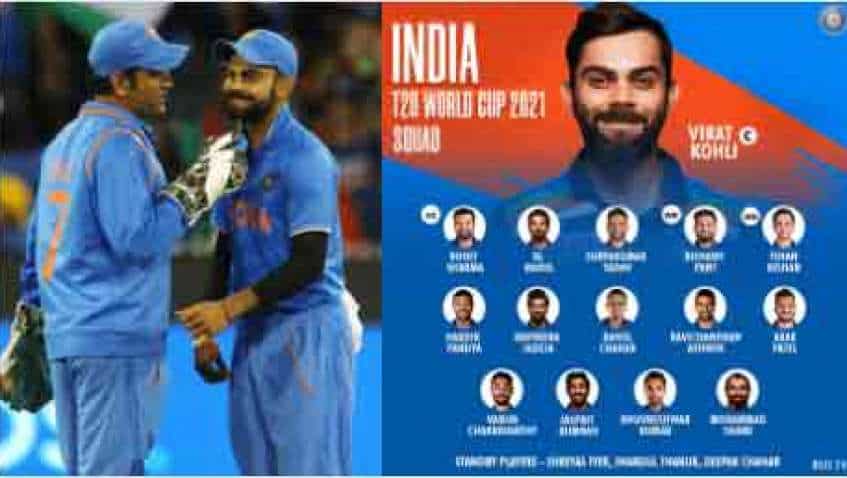 Also making the squad was Suryakumar Yadav, the 30-year-old Mumbai batsman who has been making a name for himself for his power-hitting.

The 34-year-old Ashwin last played white-ball cricket for India in 2017 before being sidelined from one-day cricket following the Champions Trophy.

However, he kept performing in the IPL besides leading India's spin attack in Test cricket.

The Squad is Out!

What do you make of #TeamIndia for ICC Men's T20 World Cup pic.twitter.com/1ySvJsvbLw

Kishan (23) and Chakaravarthy (30) have been rewarded for their consistent performance in the IPL and also impressed in the few opportunities they got with the Indian team.

The T20 World Cup starts October 17 in the UAE and Oman.

The big names to be dropped were opener Shikhar Dhawan and leg-spinner Yuzvendra Chahal.

Rahul Chahar has been preferred over Chahal who was a certainty in India's limited over squads until now.

Dhawan has been overlooked with K L Rahul, Rohit Sharma and Kishan picked as the three openers.

Talking about the squad, chief selector Chetan Sharma said: "Ashwin is an asset. He performed well in the IPL and we needed a player of his experience. We need an off-spinner with Washington (Sundar) injured.

"Ashwin is the only off-spinner in the squad. Varun is a mystery spinner who is a surprise package for the world," he added.

Sharma also stated that all-rounder Hardik Pandya is "absolutely fit and will bowl his quote of overs."

"We have picked Rahul Chahar over Yuzi as we wanted someone who bowls fast and gets pace off the pitch," Sharma explained.

Axar has been picked as a back up to all-rounder Ravindra Jadeja.

The others who could not find a place in the main squad were Prithvi Shaw and Shreyas Iyer.

Iyer has, however, made the standbys list along with Shardul Thakur and Deepak Chahar. Thakur has been in tremendous form and has already produced eye-catching performances in the ongoing Test series against England.

India will open their T20 World Cup campaign on October 24 by taking on arch-rivals Pakistan.