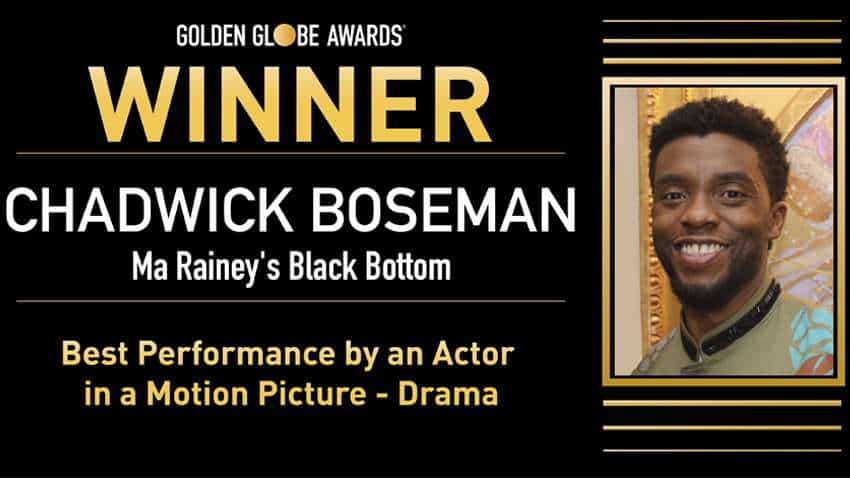 Best supporting actor in a film
Sacha Baron Cohen, The Trial of the Chicago 7
Daniel Kaluuya, Judas and the Black Messiah – WINNER
Jared Leto, The Little Things
Bill Murray, On the Rocks
Leslie Odom, Jr, One Night in Miami

Best original song
Fight for You, Judas and the Black Messiah
Hear My Voice, The Trial of the Chicago 7
Io Si Seen, The Life Ahead – WINNER
Speak Now, One Night in Miami
Tigress & Tweed, The United States vs. Billie Holliday

- Chadwick Boseman, Netflix up for honors at virtual Golden Globes

Chadwick Boseman was named best movie actor at the Golden Globe awards on Sunday, six months after his death at age 43 shocked fans around the world. Boseman, best known for the superhero movie "Black Panther," was awarded the Golden Globe for lead actor in a movie drama for his role as an ambitious trumpet player in 1920s jazz drama "Ma Rainey`s Black Bottom."  His widow, Simone Ledward Boseman, delivered a heartbreaking speech while accepting the award through tears on Boseman`s behalf.

"He would say something beautiful," she said. "Something inspiring. Something that would amplify that little voice inside of all of us that tells you you can. That tells you to keep going ... and I don`t have his words." "Ma Rainey" was Boseman`s last film performance, and Sunday`s Golden Globe marked the biggest Hollywood award for Boseman in his career in film and television. He has also won posthumous awards for the "Ma Rainey" role from several movie critics groups but was never Oscar- or Golden Globe-nominated while he was alive.

Boseman died in August 2020, having kept secret a four-year battle with colon cancer. In "Ma Rainey," the screen adaptation of August Wilson`s stage play of the same name, Boseman plays trumpet player Levee, hungry for change, who clashes with blues singer Ma, played by Viola Davis, on a hot 1920s day in a Chicago recording studio.

In one of the play`s key moments, Levee rails against God for turning his back on Black people in a speech that fellow cast members said gave them the chills when filming, even though they were unaware he was struggling with cancer. "Something very spiritual happened in that moment. It was something you could not look away from. ... It was an extraordinary moment. It was a terrifying moment as well," actor Michael Potts said in an interview last year. Boseman is also nominated for a Screen Actors Guild award next month, and is widely expected to be a strong Oscar contender when nominations are announced in mid-March. "And honey, you keep `em coming," Ledward Boseman said at the end of her Globes speech.

"Minari", a semi-autobiographical drama about a family of Korean immigrants trying to realise their American dream in the 1980s, has won the best foreign film Golden Globe following a controversy around the its classification that led the movie to be overlooked in the best picture race.

The Hollywood Foreign Press Association (HFPA), the body that conducts the Globes, courted sharp criticism from several personalities, including Lulu Wang, Simu Liu, and Phil Lord after it relegated the Lee Isaac Chung directorial to the foreign-language category given that the film was financed and produced by American companies, A24 and Plan B, respectively.

The cast, led by "The Walking Dead" alum Steven Yeun, and crew were also majority made up of American talent.

It really was a family affair for Chung, whose seven-year-old daughter was sitting in his lap, as accepted the award, his first.

The filmmaker thanked the "Minari" team, his cousins, his parents, his sister, and his wife, who he said was "hiding".

"And this one here," he said patting his daughter who went on to hug him tightly, adding "she is the reason I made this film."

Chung, who has received rave reviews for the film, also addressed the controversy around its nomination.

The second-generation Korean American said "Minari" is about a family that is trying to speak a language of its own.

"It goes deeper than any American or foreign language," he added.

"It's a language of the heart and I'm trying to learn it myself and pass it on. I hope a lot of (people) learn how to speak this language of love to each other especially this year. God bless you all and thank you," Chung said as he closed his acceptance speech.

As per the rules of the HFPA, the contenders for the best drama or comedy/musical categories must feature at least 50 per cent English dialogues.

Drama "Nomadland" and satire "Borat Subsequent Moviefilm" won movie honors at the Golden Globes on Sunday in a mostly virtual bicoastal ceremony that was marked by impassioned calls for more diversity and the dominance of Netflix.

"Nomadland," a moving drama about van dwellers in recession-hit America from Searchlight Pictures, also took the best director prize for Chinese-born Chloe Zhao. It made Zhao only the second woman to win at the Globes in that category, and the first woman director of Asian descent to win.

"For everyone who has gone through this difficult and beautiful journey at some point in their lives, this is for you," said Zhao.

"We don`t say goodbye, we say see you down the road," she said, quoting a line from the movie.
The two wins for "Nomadland" increased the profile of the film ahead of nominations in March for the Oscars.

Sacha Baron Cohen, the creator of "Borat Subsequent Moviefilm" from Amazon Studios was named best comedy movie actor, while singer Andra Day was a surprise winner for her lead role in "The United States vs. Billie Holiday."

"Donald Trump is contesting the result!" Baron Cohen joked about the win for the "Borat" sequel, which was a satire on the America of the former U.S. president.

Nevertheless, the streaming service was the biggest winner on Sunday, with four wins in the movie field and six for television, including best TV drama series "The Crown" and limited series chess saga "The Queen`s Gambit."

The usual chummy gathering of A-listers at a gala dinner in Beverly Hills, California, was replaced by webcams in the homes of celebrities that were either dressed up or, like "Ted Lasso" star Jason Sudeikis, in casual garb.

Hosted by Tina Fey in New York and Amy Poehler in Beverly Hills, the small physical audiences were made up of masked frontline workers.

Peter Morgan, creator of "The Crown" said he missed being together. "I`m just sorry I am sitting here in my tragic little office and not surrounded by the people who make this show such a pleasure," Morgan said, appearing by video.

However Jodie Foster, a best supporting actress winner for the Guantanamo prison legal drama "The Mauritanian," told reporters backstage that she felt it was one of the best Golden Globe shows ever.
"It didn`t feel like it was filled with so much artifice," said Foster.

"He would say something beautiful," said his widow Simone Ledward Boseman, as she fought back tears. "I don`t have his words."

British actors Daniel Kaluuya and John Boyega were among other Black winners chosen by the Hollywood Foreign Press Association (HFPA), which has been lambasted in recent days for having no Black people among its 87 members.

"Soul," the first Pixar movie to have a Black character in the lead, was named best animated movie and won best score.

The HFPA was the target of jokes and comments throughout the night. "We all know awards shows are stupid," said Fey. "Even in stupid things, inclusivity is important and there are no Black members of the Hollywood Foreign Press Association."

Members of the HFPA appeared briefly on Sunday`s show and pledged to do better.

Jane Fonda, 83, used her lifetime achievement acceptance speech to make the case for elevating all voices in Hollywood, saying that stories "really can change people.

Art has not just walked in step with history but has led the way, said Hollywood veteran Jane Fonda, who emphasised the need for more diversity in the entertainment industry during her acceptance speech for the Cecil B DeMille Award at the 2021 Golden Globes.

Citing the power of storytelling, the 83-year-old actor-activist urged for colleagues to show leadership, representation and denounce favouritism in Hollywood.

"Stories, they really can change people. But there's a story we've been afraid to see and hear about ourselves in this industry, a story about which voices we respect and elevate and which we tune out, a story about who is offered a seat at the table and who is kept out of the rooms where decisions are made," Fonda said.

"So let's all of us, including all the groups that decide who gets hired and what gets made and who wins awards, let's all of us make an effort to expand that tent so that everyone rises and everyone's story has a chance to be seen and heard," she added.

The seven-time Golden Globe winner said it is time leaders acknowledged and recognised diversity.
"Doing this simply means acknowledging what's true, being in step with the emerging diversity that's happening because of all those who marched and fought in the past and those who have picked up the baton today. After all, art has always been not just in step with history, but has led the way. So let's be leaders; okay?" Fonda further said.

The actor, who was feted for her "lasting impact on the world of entertainment", also listed many of the works that inspired her in the past year, including "Nomadland", "Minari", "Judas and the Black Messiah", "Small Axe", "US vs Billie Holliday", "Ma Rainey's Black Bottom", "One Night in Miami" and "I May Destroy You".

Many of these pieces of art, she said, "have deepened my empathy for what being Black has meant".
Fonda, who already has two Academy Awards, an Emmy, and an AFI Life Achievement to her name, became the 67th - and 16th female - to receive the coveted award.

Her most recent feature film outing was the 2018 film "Book Club", whose sequel is currently under development. She also stars in Netflix comedy series "Grace and Frankie", which was renewed for a seventh and final season in 2019.

In 2019, Fonda made headlines for her participation in the climate change protests in Washington DC, wherein she was arrested on multiple occasions.

Previous winners of the Cecil B DeMille Award include the likes of Walt Disney, Judy Garland, John Wayne and Frank Sinatra, as well as her father Henry Fonda.

Golden Globes 2021: Following is a list of key film nominations: