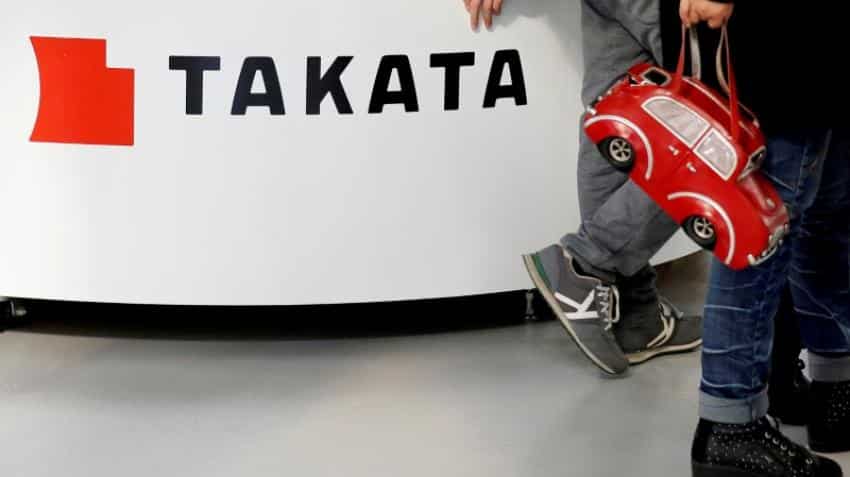 Visitors walk past a logo of Takata Corp on its display at a showroom for vehicles in Tokyo, Japan. Image Source: Reuters
Written By: Reuters
RELATED NEWS

The global recall of Takata Corp`s defective air bags widened last week and the number of confirmed deaths rose, but legal experts said the bigger worry for car companies caught in the fallout is playing out in a Delaware bankruptcy courtroom.

Earlier this month, people injured by the air bags, which degrade over time and can inflate with excessive force, were appointed to their own official committee in the Japanese company`s U.S. bankruptcy, giving them a powerful voice in the proceedings.

This unusual committee, which includes people whose cars lost value due to the recall, will be pitted against Honda Motor Co, Toyota Motor Corp , and other automakers.

The car companies have been trying to use the bankruptcy to limit their liability for installing the faulty air bags, said Kevin Dean, a Motley Rice attorney who represents injured drivers on the committee.

Because the committee has official status, Takata must provide it with funds which can be used to investigate the automakers` liability or to challenge financial assumptions. Without a committee, plaintiffs` lawyers would typically have to pay for that themselves.

“If I were a plaintiffs’ lawyer, this would be a golden goose for me,” said John Pottow, a professor at the University of Michigan Law School, of the appointment of the special committee.

Takata, Honda, Toyota and General Motors Co declined to comment. Other carmakers did not return requests for comment.

Bankruptcies typically only have one official creditors committee. In the Takata case, the committee of injured drivers will sit alongside another made up of suppliers and vendors, who are likely more interested in the future of the business than compensation disputes, according to bankruptcy attorneys who are not involved in the case.

Both committees were appointed by the U.S. Trustee`s Office, the arm of the U.S. Department of Justice that acts as a bankruptcy watchdog.

Seventeen fatalities, including one confirmed last week, and at least 180 injuries have been tied to Takata`s air bags since at least 2009.

Last week, the National Highway Traffic Safety Administration widened a global recall of the airbags, which regulators expect to ultimately cover 69 million cars and 125 million inflators. Most defective air bags have not been replaced.

In January, Takata entered a settlement with the U.S. Department of Justice, setting aside $125 million to compensate consumers and $850 million in restitution for automakers.COMPENSATION FUND

Facing up to $50 billion in liability, Takata filed for bankruptcy in June in Japan and the United States with a plan to sell its non-air bag operations for $1.6 billion to Key Safety Systems, which is owned by China`s Ningbo Joyson Electronic Corp. Its air bag business would continue to make replacements for the 125 million recalled inflators.

Takata said in its Chapter 11 filings that it will create a fund to compensate future injuries stemming from the air bags.

Companies that wind up bankrupt due to faulty products often set up such funds, and gather contributions from insurers and other potentially liable parties, who in return get shielded from ongoing litigation.

Similar funds were set up in and the 1985 bankruptcy of A.H. Robins Co, which sold Dalkon Shield contraceptive devices and the 1995 bankruptcy of Dow Corning, the maker of silicone breast implants.

A $161 million fund in the 2012 bankruptcy of Blitz U.S.A. Inc, which made red plastic gas containers, included $23 million from Wal-Mart Stores Inc. In return, the retailer was protected from lawsuits that alleged it knowingly sold defective gas cans.

Automakers would likely demand similar legal protections in return for contributing to a Takata fund, and the committee will likely hire experts to challenge those proposals, bankruptcy experts said.

The committee`s lawyers will probably also want to investigate what car companies knew about the air bags to help determine their liability and their contributions, the experts said.

“If I were an injured person, I wouldn’t want Takata or the carmakers to decide on the size of the fund,” said Steven Todd Brown, a professor at the University at Buffalo School of Law who specializes in compensation funds.

Some experts said they expected the parties to avoid protracted legal battles which have marred other product liability bankruptcies like those involving asbestos.

Pottow, at the University of Michigan Law School, cautioned that may not be so simple.

“We’re in pretty novel terrain here, given the amount of parties and the recall involved.”