Yen surges strongly after Bank of Japan holds off from easing

The Japanese currency's surge took a bite out of Tokyo's benchmark Nikkei stock index, which dived more than 3%, as the strong yen threatened the profit outlook for Japan's exporters. 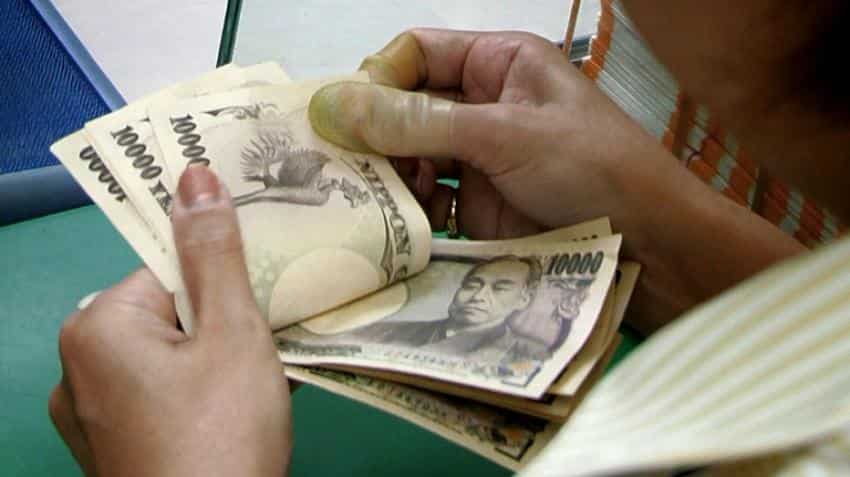 "The yen is being bought because some traders had expected more easing (from the BOJ) but the bank didn't make a move," said Marito Ueda, a senior dealer of FX Prime in Tokyo. Image Source: AFP
Written By: AFP
RELATED NEWS

The yen surged on Thursday after the Bank of Japan (BOJ) held fire on fresh stimulus measures, as fears over Britain's future in the European Union (EU) pummel financial markets around the world.

Japan's currency powered to 103.55 against the dollar, its strongest level since the summer of 2014, as the central bank voted to keep a massive 80 trillion yen annual asset-buying plan unchanged, despite the weak economy.

The unit was at a more than three year high of 116.92 against the euro in the afternoon.

The Japanese currency's surge took a bite out of Tokyo's benchmark Nikkei stock index, which dived more than 3%, as the strong yen threatened the profit outlook for Japan's exporters.

"Policymakers concluded that they need to take a wait-and-see position since the high yen is largely linked to concerns about Brexit," said Ryutaro Kono, chief economist for BNP Paribas in Tokyo.

The BoJ's decision comes after the US Federal Reserve on Wednesday held off raising interest rates and its boss Janet Yellen sounded a warning over a possible British exit -- or Brexit -- from the EU.

Her comments had sent the dollar tumbling against the yen in the US trade, with the losses picking up after the Japanese central bank ended its policy meeting.

Another round of easing from the BOJ would tend to weaken the yen, which has been gaining favour as investors seek out assets seen as safe bets.

"The yen is being bought because some traders had expected more easing (from the BOJ) but the bank didn't make a move," said Marito Ueda, a senior dealer of FX Prime in Tokyo.

"Partly because of concerns over Brexit, the yen had already been bought more than the dollar," he added.

World markets have been in turmoil over the past week on worries about the global economic outlook and, in recent days, a growing sense that the June 23 referendum will see Britons vote to break away from the European Union (EU).

A vote to leave the 28-member economic bloc could have significant consequences for more than 1,000 Japanese firms that operate in Britain -- many see it as a staging point for doing deals in Europe.

Tokyo repeated warnings it could intervene in currency markets to tame the resurgent currency.

The warning was the latest from officials over the yen's rise, which is threatening profits at Japan Inc and dealing a blow to Prime Minister Shinzo Abe's growth blitz, dubbed Abenomics.

However, any intentional move to weaken the yen could put Japan on a collision course with its G20 counterparts, who have agreed to hold off such moves.

BOJ chief Haruhiko Kuroda would not say if policymakers held off fresh moves because of next week's vote.

However, he said Britain was an "important" member of the EU, which has been a "great economic gift" for nations in the bloc.

The BOJ "is closely watching the (referendum's) impact on the global economy, including in Japan", he told reporters.

The bank chief added that the central bank would not hesitate to launch fresh easing measures if the strong yen was hurting the economy.

The BOJ shocked markets in January after it adopted a negative interest rate policy that effectively charges banks for storing excess reserves in its vaults.

The move -- separate from its massive asset buying plan -- was aimed at spurring lending to help reach a 2% inflation target, a cornerstone of Abenomics.

Japan's economy grew 0.5% in the first quarter, dodging a recession, but there are widespread concerns about the strength of its recovery.

Tokyo this month said it would delay a planned sales tax hike to avoid damaging the fragile economy.

In response, Fitch cut its outlook for Japan's credit rating, saying it undermined the country's commitment to paying down one of the worlds biggest national debts.