What cryptocurrency market should learn from Warren Buffett

Investments in companies such as  Apple, Bank of America, American Express, Well Cargo, The Coca-Cola, The Kraft Heinz has not only made Buffett billionaire but also added hefty in Berkshire’s kitty. 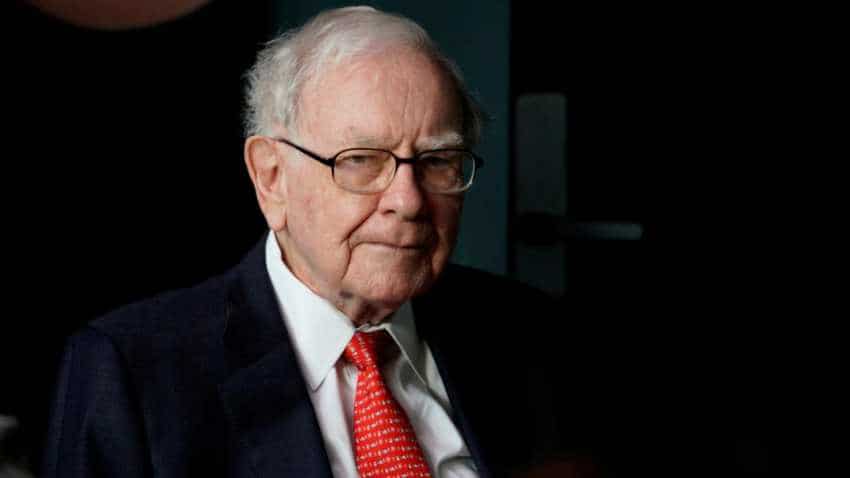 The ‘Oracle of Omaha’ Warren Buffett does not like cryptocurrency more specifically Bitcoin. Photo: Reuters

The ‘Oracle of Omaha’ Warren Buffett does not like cryptocurrency more specifically Bitcoin. On multiple occasion Buffett has not shied away from talking negative on Bitcoin. The latest would be Buffett calling Bitcoin as a gambling device which just sits there and hasn’t produced anything. He even went on to comparing Bitcoin as buttons of his jacket, and not only that, the equity king sees this digital coin like a seashell  or something. While the world is still crazy about Bitcoin and other cryptocurrencies, either be good or bad. But it is still not understandable to why Buffett would bash so weirdly on Bitcoin. The answer lies in his own Berkshire Hathaway. We are all aware of Berkshire being famous and real winner in terms of gains from capital market. That is also luck of being a Buffett company. Investments in companies such as  Apple, Bank of America, American Express, Well Cargo, The Coca-Cola, The Kraft Heinz has not only made Buffett billionaire but also added hefty in Berkshire’s kitty. But it is Berkshire’s share price which sets an example to what exactly a cryptocurrency market can learn.

It is justifiable for not being gaga over Bitcoin. This digital coin has been in existence since 2009 and was launched by an anonymous individual or entity. It is still unclear to who really launched Bitcoin. It is seen as a bubble which can blast any moment, due it’s no regulatory backup and skilled management. In real world scenario, you might have only seen blockchain companies which are platforms available for trading in cryptocurrencies. Bitcoin’s December 2017 blockbuster performance changed the perception of trading and investment on exchanges. However, it also proved how unpredictable and unreal it is, which is enough to give shivers to your spine.

Then there is Berkshire Hathaway’s Class A share price which has surprisingly proven what right a cryptocurrency world can do.

But who knew that was just warming up! The performance from 2006, has been mixed. Berkshire shares broke down during global crises to even below $80,000-mark in 2009. Even if investors bought the shares during global uncertainty, Berkshire was set to surprise.

The journey till now in Berkshire shares has only seen upward movement despite volatility since 2000.  In fact, Berkshire also touched a whole new high of $335,900 in October 2018. Where Buffett’s company showed uptick  movement, the performance of Bitcoin is still downward from 2017 levels. 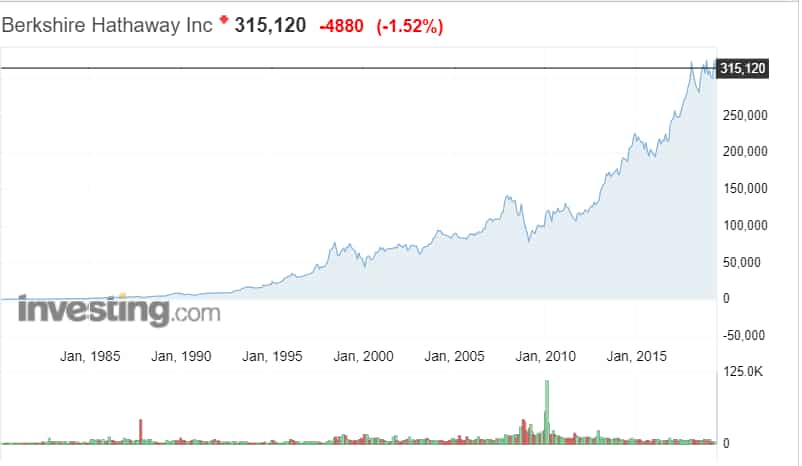 Now one would wonder why Berkshire and Bitcoin comparison. Let’s find out!

Currently, Berkshire is the most expensive publicly traded stock of all time. Reason behind Berkshire’s uproar is that the company has never completed a stock split. When a firm decides for stock split this increases the number of shares and reduces the price, however, there are no change in market capitalization.

This is exactly the same similarity with Bitcoin. Because there is no management, no annual reporting, no profit or loss just random tradings in Bitcoin. Hence, the option of a stock split is out of imagination in Bitcoin. Apart from this, Berkshire’s Class A shares are also limited just like Bitcoin.

On the other hand, Berkshire stands to win due to its extraordinary shareholder gains, commendable founders, strong management like Buffett and Charlie Munger, and a stable business portfolio.

Bitcoin currently trades near $5,880. The coin was trading near $19,909-level in mid December 2017. Point of note is that Bitcoin has already been in bubble phase three times since inception.

In its annual report for the first quarter of FY19, Berkshire revealed that number of shares  common stock outstanding as of April 25, 2019 in class A are at 723,114. Net earnings per average equivalent Class A share was at $13,209 million.

Interestingly, Buffett has acknowledged blockchain technology which is currently practiced across the globe. But his stance in Bitcoin and cryptocurrencies remains unchanged.

Blockchain world has come a long way since Bitcoin’s mega performance. Last year in its research note, Mckinsey explained that one sign of blockchain’s perceived potential is the large investments being made. There is a clear sense that blockchain is a potential game-changer. However, there are also emerging doubts.

It is quite certain that blockchain is misunderstood currently. Mckinsey raised attention over security concern. It highlighted that in smaller networks where validation relies on a majority vote there is manifest potential for fraud (the so-called “51 percent problem”). Another potential security challenge arises from advances in quantum computing. Google said in 2016 its quantum prototype was 10 million times faster than any computer in its lab. That raises the possibility that quantum computers will be able to hack codes used to authorize cryptocurrency transactions; a particularly troubling threat for a network that claims to be fraud resistant.

By 2020, it is expected that some 20 billions devices all of which will need management, storage, and retrieval of data. From Berkshire Hathaway, one can surely learn the importance of having strong management and backed with regulatory norms.