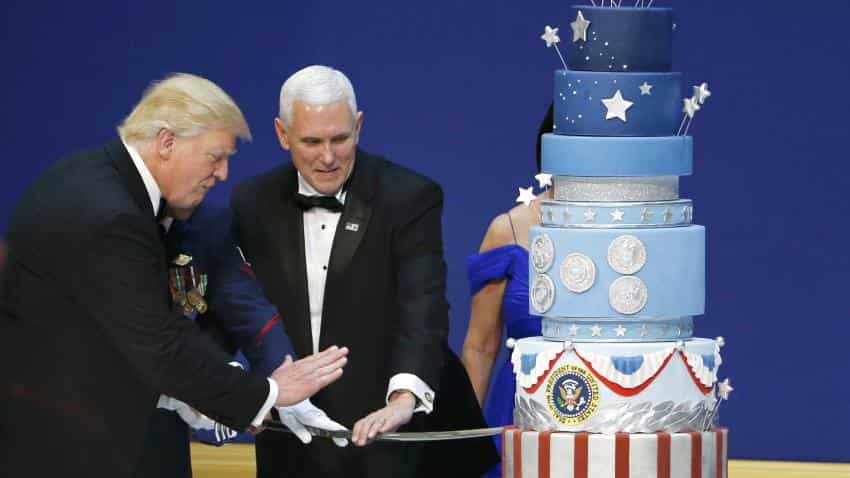 As the clock struck the noon hour, Donald Trump with his left hand on Abraham Lincoln`s bible, raised his right hand to take an oath to preserve, protect and defend the American constitution.

With that act, the destiny of the world`s oldest democracy fell into the hands of the man who had pulled off a stunning victory in the US presidential election with a pledge to "Make America Great Again."

Even as he thanked Barack Obama, the first black occupant of the White House, for the historic "orderly and peaceful transfer of power", the rank outsider took swipes at the entire political class for what he called "American carnage."

"For too long, Washington had flourished and politicians prospered, while the people had borne the cost," he thundered with four of his predecessors -- Obama, Jimmy Carter, Bill Clinton and George Bush -- looking on.

It "will be remembered as the day the people became the rulers of this nation again. The forgotten men and women of our country will be forgotten no longer," promised the ever combative billionaire with an uncharacteristic poetic flourish.

"We will seek friendship and goodwill with the nations of the world" -- but "from this moment on, it`s going to be America First", he said, serving notice on foes and friends alike.

Pundits were left scratching their heads whether "America First" coupled with his vow to "Make America Great Again" portended America as an isolationist or a highly engaged superpower.

"This is your day. This is your celebration," the mogul told an estimated 900,000 people filling the expanse of the National Mall in front of the Capitol under an overcast sky and millions watching around the country.

But not everyone was celebrating. As many as 70 Democratic lawmakers stayed away from the inauguration after his tiff with Democratic civil rights icon John Lewis, who had called the Trump presidency "illegitimate" over allegations of Russian interference to help him.

Instead of backing down, the mogul extended his criticism of Lewis of "all talk and no action" to politicians of all hues. Trump never mentioned his Democratic rival Hillary Clinton during the inaugural address, but thanked her and Bill Clinton for attending his inauguration despite their bitter election fight when he labeled her "crooked Hillary". "I have a lot of respect for those two people," the newly minted President said after leading a standing ovation at a Congressional luncheon.

But the Centre for American Progress Action Fund headed by Neera Tanden, a top desi Clinton aide, has launched a "Resist campaign" against what it called the excesses of the Trump administration.

Carrying signs reading "Not my president", "No Islamophobia" and "Black Lives Matter", among others, hundreds of noisy demonstrators taunted Trump supporters along the inauguration parade route.

Police used stun grenades and pepper spray as some self-described "anarchists" dressed in black and wearing masks turned violent and smashed windows of businesses, set a limousine on fire and threw stones at the cops. Over 200 people were arrested for rioting.

Over 200,000 more protesters are descending on Washington for a Women`s March on Saturday.

Meanwhile, Obama who flew off into history after graciously saying "Good job" to his staff, made it clear that unlike his predecessor Bush, he would be back soon to save his legacy.

"This is not a period; this is a comma in the continuing story," he told members of his staff before departing for vacation in California from Joint Base Andrews.

And hours after telling Americans "The time for empty talk is over. Now arrives the hour of action," Trump picked up his executive pen to roll back Obama`s signature healthcare law and order a regulatory freeze at all government agencies and departments.

Then, at their first inaugural ball of the night, Trump and the new First Lady Melania danced to Frank Sinatra`s "My Way" after telling the crowd, "We did it" -- a very appropriate song for the man who ran a very unconventional campaign his way all the way.

But the Manhattan mogul who heralded his inauguration in typical fashion with an early morning tweet -- "It all begins today! The Movement Continues - The Work Begins!" -- had to trade in his android phone as he gained the Oval Office.

As Trump lost the phone and gained the executive pen, the question was whether the tweeter-in-chief turned commander-in-chief or the presidency would be the same again!