Apple Chief Executive Tim Cook had done a "terrific job," Buffett said, but added he had not bought shares since the company`s earnings report. 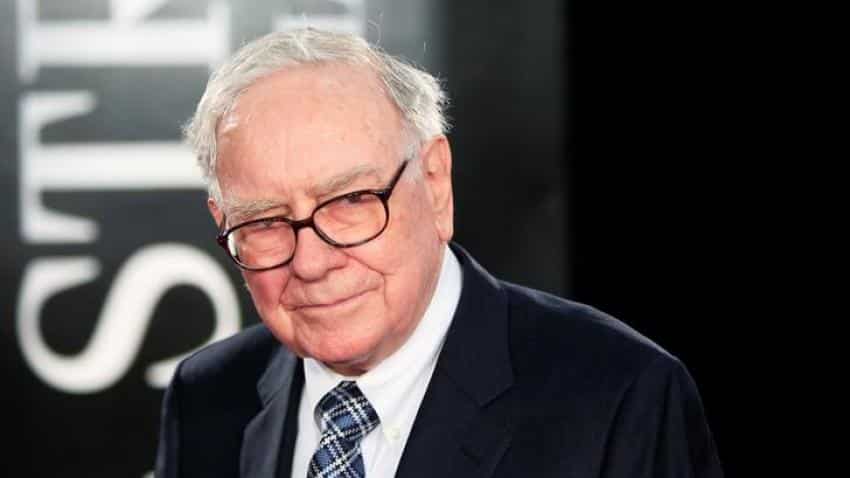 Billionaire investor Warren Buffett told CNBC on Monday his conglomerate Berkshire Hathaway Inc had more than doubled its stake in Apple Inc. since the end of 2016, making it one of Berkshire`s biggest equity holdings, and that US stocks overall were not in "bubble territory."

"Apple strikes me as having quite a sticky product and an enormously useful product to people that use it, not that I do," said Buffett, chairman and chief executive of Berkshire Hathaway.

He said Berkshire`s Apple stake, currently at about 133 million shares, was worth about $18 billion based on Friday`s closing price and amounted to Berkshire`s second-biggest holding.

At the end of Dec. 31, Berkshire had held 61.2 million shares for a total of $6.75 billion, according to regulatory filings. Buffett said his ambitious move into Apple shares was piggybacking on the initial investment made by Buffett`s deputy investment managers, Todd Combs and Ted Weschler.

Apple Chief Executive Tim Cook had done a "terrific job," Buffett said, but added he had not bought shares since the company`s earnings report.

Buffett, 86, who told the cable television network that Berkshire had spent about $20 billion on stocks since just before the Nov. 8 US election, also said the US stock market was cheap with interest rates at current levels.

Benchmark 10-year US Treasury notes last yielded 2.333% in morning US trading. Buffett said it was extremely difficult to attempt to find a floor in stock prices and that he did not know what would happen in the near term in the equity market.

He said US shares could conceivably "go down 20% tomorrow." Buffett said Berkshire`s positions in airlines remained unchanged. He said pricing shares of airlines has historically been a "very tough game" and he had never met the chief executives of the four airlines in which Berkshire holds stakes.

Buffett, who was a vocal supporter of Democratic presidential candidate Hillary Clinton, said he would judge US President Donald Trump based on how safe the country is in four years.

He said he would also judge the Republican president according to how the US economy performs overall and how wide participation in a better economy extends.

Despite his disagreement with some of Trump`s policies, Buffett said the US economy would be better off in four years under any president. He said that US Secretary of State Rex Tillerson made "a lot of sense."

On Kraft Heinz`s snubbed bid for Unilever, Buffett said it was never intended to be a hostile offer and that there was not a "backup deal." Berkshire is a key investor in Kraft Heinz.

"Will there be another deal at Kraft Heinz some day? My guess is yes, but who knows when, I mean, there’s no backup deal, and again, it would have to be friendly and frankly, the prices in that field make it very, very, very tough to make an intelligent deal."

Asked about Berkshire`s $86 billion cash pile, he said the conglomerate was "always looking" for acquisitions but that there was "nothing close."

Buffett said it was enormously important for the US economy to have 30-year government-guaranteed mortgages, but that mortgage giants Fannie Mae and Freddie Mac were not necessary in order to accomplish that.

On 30-year US Treasury bonds, Buffett said: "It absolutely baffles me who buys the 30-year bond" and that doing so was not sensible at current yields. US 30-year government bonds last yielded 2.964%.

Buffett reiterated that Americans are better off buying plain-vanilla index funds than committing money to active managers. He added that the hedge fund industry`s standard fee structure of 2% of assets and 20% of investment gains "borders on obscene."

In an annual letter to shareholders on Saturday, Buffett slammed fee-hungry investment managers: "When trillions of dollars are managed by Wall Streeters charging high fees, it will usually be the managers who reap outsized profits, not the clients."

Buffett praised Amazon Chief Executive Jeff Bezos as possibly the best manager he had ever seen and said Berkshire "missed big time" by not purchasing Amazon shares early on.
He said the US economy was doing "terrific," even at just 2% growth per year.